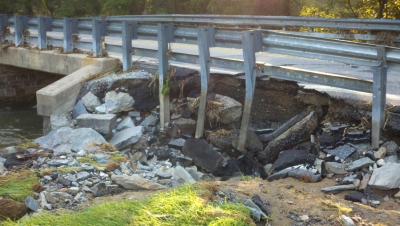 This photograph of a damaged bridge on Route 216 in Springfield Township was York taken by a York, Pa., Daily Record/Sunday photographer. This scene came after the Daily Record/Sunday News published a YouTube video received via Facebook of a school bus driving through recent flood waters on that road. This is an example of how social media has become a vital link to the news. Also of interest: Facebook conversation about York, Pa.’s, downtown arises from York Town Square blog post.

It linked to a related story posted on our ydr.com website.

– “Shiloh — one heck of a storm going on … horrible lightning.”
– “Thunder/Lightning in York New Salem.”

At one point, our editor again weighed in: “Nasty stuff, keep under cover everybody.”

This approach to journalism is called crowdsourcing. We’ve actually been doing this for years. The Your News section in the York Sunday News is an example of putting crowdsourced content into print. And you can argue that letters to the editor are a longtime form of crowd sourcing. But social media gives news organizations a ready, sharp-edged tool to gather news and views from a wide audience.

Social media and other web features give our news organization the ability to carry on real-time conversations with readers, who are really working as reporters. Part of our job as a news provider is to present platforms for the sharing of news and views.

They’re broad stages, providing opportunities for hundreds of commenters to inform each other about York County each week.

We appreciate the fact that people are using — and appreciating — our Facebook page and other social media platforms for information and observations.

Such as this from a weather watcher near the York Fair: “I live right around the corner, and heavy rain also… . Thanks for the update YDR/SN!!”

– For bad weather photos submitted by the “crowd,” see Your Photos.

– All bad weather posts from the start. 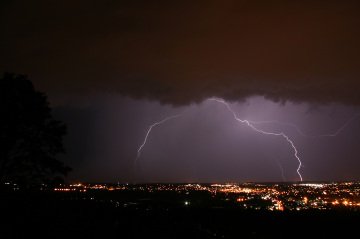 Tyler Tate submitted this view of lightning bolts over North York to ydr.com’s Your Photos section.