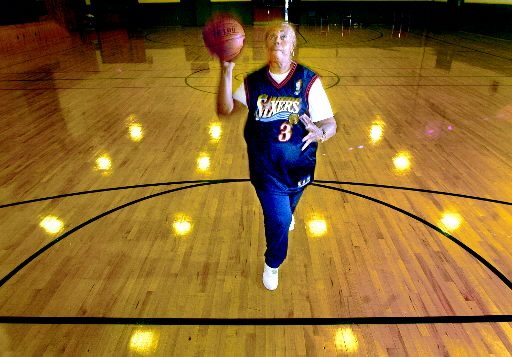 Sylvia Colston-Stillis back on the basketball court at Crispus Attucks.

She starred in basketball in the 1950s and participated in other programs at CA’s former center at 125 E. Maple St. building. In those days, the converted church was viewed as a home away from home by many in the black community.

After a long career as a school guidance counselor, Dr. Colston-Still continues to play basketball every day at age 71… .

She plans to return to York Saturday to a CA 75th anniversary event.
Her profile appeared in the YDR Tuesday.
I’ll pass on my favorite quote from that story here:
“There are so many things I am looking forward to in life. This isn’t the end. There is something good coming up, I don’t know what or when. God is not through with me yet. I think there is a lot out there I have to offer.”
See a team photo from 1953, as well as the series the York Sunday News is running on CA’s past by clicking on black history.