Reality TV? Monica and ‘The Bachelor’ 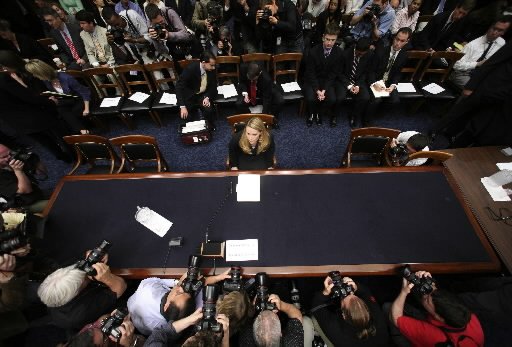 York Haven-area native Monica Goodling is surrounded by photographers as she took her seat to testify before the House Judiciary Committee about what she knows of the motive behind the firings of nine U.S. attorneys. But reality TV has given her a run for the local spotlight, as York countians have shown prowess on the screen. Most recently, Keefer family in Newberry Township picked for ‘Extreme Makeover: Home Edition’. Background posts: Background posts: Monica Goodling proves that all roads lead to York County, Clinton, Obama at Messiah College: Still stopping short of stepping on York County soil and About Monica Goodling: ‘She’ll come through this.’

Monica Goodling has put York County into the national news again.
But she was almost upstaged by the local woman, Tessa Horst , who won “The Bachelor.”
Which brings us to the prowess of county residents in appearing on – and occasionally winning – reality shows. York Daily Record/York Sunday News editorial page editor Scott Fisher compiled an impressive list of recent reality shows participants from York County. He came up with eight.
What is it about York County that would draw our folks to TV studios to tell their stories and to occasionally make fools of themselves?
Anyway, here’s Scott’s Sunday newsmaker: …

With the advent of TV reality shows, it looks like Andy Warhol was right. Everyone gets 15 minutes of fame. Or at least five. For proof, just look at how many people with York County connections have appeared on reality shows over the last few years:
Hardy-Ames Hill, “Big Brother.”
Scot Parsley, “The Scholar.”
Ray Krone, “Extreme Makeover.”
Lacey Wilson and Evangelin Pesci, “Shear Genius.”
Mary Smith, “Ace of Cakes.”
Jamie Gibbs, “So You Think You Can Dance.”
Tessa Horst, “The Bachelor” – who actually won when she received a marriage proposal from Lancaster native Andy Baldwin.
And Dallastown native Jessica Brillhart is in the running for a finalist spot in “On the Lot.”
No York-bred “American Idol” contestants have yet risen to the top.
It’s probably just a matter of time.