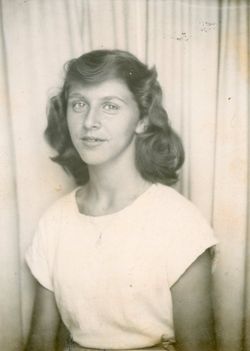 Back on July 20, longtime memory-sharer Charlotte Halpin passed away at age 89.

I knew Charlotte primarily through her sister, my friend Audrey Lerew, a local history researcher who helps me out with many, many of the questions I receive. Also through local history circles, I came to know one of Charlotte’s sons, Greg Halpin, York’s retired assistant fire chief.

Charlotte had worked as a secretary at C.B. “Red” Klinedinst’s bike and applicance store, starting when she was 13 or 14 and retiring almost 70 years later. Red’s store closed in 2012; Charlotte was there for that. In 2014, that building on South Duke Street became the home of the Redeux vintage market; Charlotte attended the grand opening.

In a 2008 YDR story written after Klinedinst’s son-in-law, George Royer, passed away, Charlotte was asked to describe the oldest piece of the store’s inventory. Then 77, she said, “Me.”

“I came in in 1944,” she said. “We had hundreds of bicycles. We’d get bicycles in by the truckload.” Halpin compared bicycles of past and present, seemingly amazed by the advances in technology but also missing the earlier models. “They only went as high as three speeds,” she said. “Nothing’s simple anymore.”

(Read more of that story on Jim McClure’s York Town Square, as well as more on Klinedinst’s becoming Redeux. You can also read more memories from Charlotte here and more about Red Klinedinst’s here.)

She was also the first female newspaper carrier in York.

And Charlotte’s husband, William “Chief” Halpin, was the city fire chief for many years, and Charlotte was a big part of the Ladies Auxiliary of York Paid Firefighters. She helped with fundraisers, selling food in front of Vigilant Fire Station during the York Halloween Parade and working at the auxiliary’s table at the World’s Greatest Yard Sale as well.

Charlotte cared for people – sometimes checking on those who lived in the apartments above Red’s store when they were ill, making sure they had meals and so on.

She still remembered her youth in York until very recently, but unfortunately, struggled to remember the “now” because of the ravages of dementia.

My job is preserving memories, and that makes Alzheimer’s and other dementias seem especially cruel. I’m just grateful that, while she could, Charlotte shared so many of her York memories with me, Jim and others over the years, and especially that Audrey did so much work to document them for me in recent years.

That’s why, for anyone interested and able, I’d love to encourage you to make contributions in Charlotte’s memory to the Alzheimer’s Association, 2595 Interstate Dr., Suite 100, Harrisburg, PA 17110 (or donate online here).