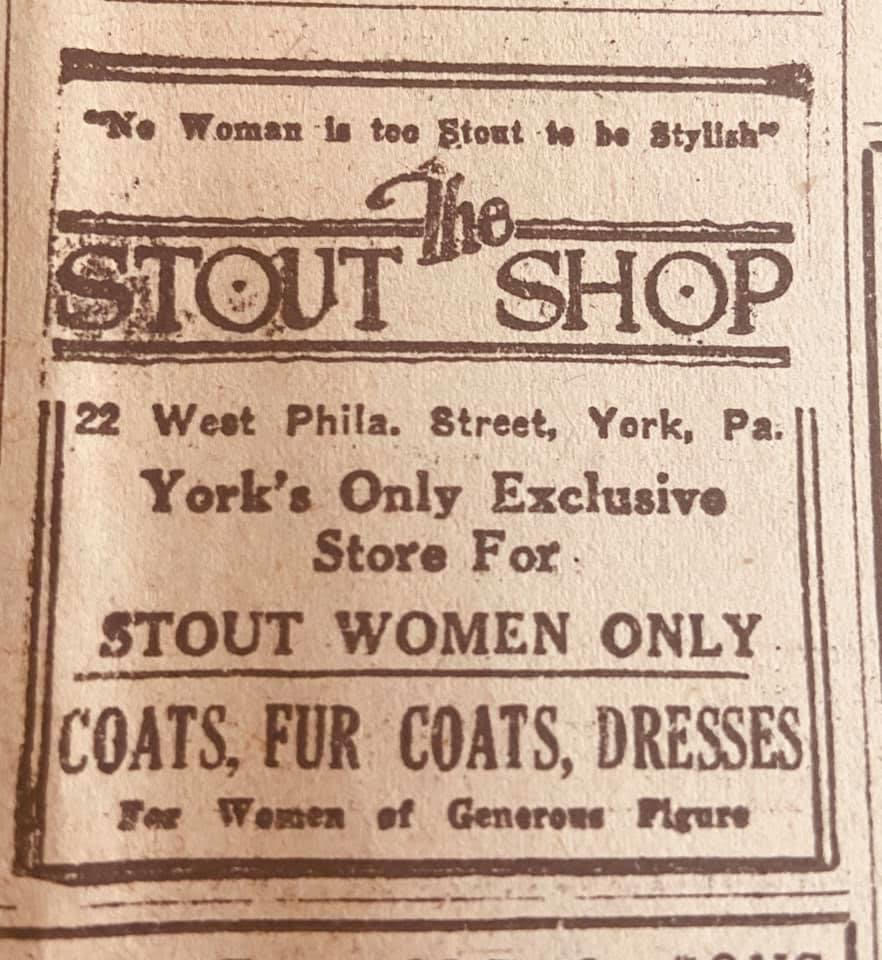 Today, I’d like to share some recent questions from readers on a truly impressive variety of topics. I am hopeful other readers will be able to help in the cases where I don’t already have an answer – or fill in more details even if we can provide the basics!

1. Recalling a store for the stout
2. Seeking name of pizza restaurant
3. Where was WORK radio transmitter?

1. Recalling a store for the stout

Regarding today’s first question, I would like to begin by saying that I thought I had a pretty extensive list of the stores of the past in downtown York. But reader Melody Lherisson found an ad for one that was news to me, which you can see with today’s column!

It’s for a business called The Stout Shop, 22 W. Philadelphia St. in York. Melody wrote, “I was wondering if you or your followers have heard of this store in York. My maiden name was Stout and I was curious about it.”

The Stout Shop billed itself as “York’s only exclusive store … for women of generous figure,” an early predecessor to the Lane Bryants or Torrids of our day. I had no idea there was such a shop in York, and as someone who could, we’ll say, “generously” be described as having a generous figure, I am beyond thrilled to know this was an option. I would love to hear more!

Our next question, short and sweet, comes from Daniel McMaster, who wants to know, “What was the pizza restaurant at York Mall?”

Unfortunately, the hardest part about Daniel’s question is that I don’t have an era to shoot for. We could be talking about Showbiz Pizza, the predecessor to Chuck E. Cheese in that complex today, or we could be talking about something from back when that center housed Montgomery Ward and J.C. Penney and The Bon-Ton. Though I haven’t found any mentions of pizza in those earlier days, it certainly doesn’t mean there couldn’t have been one, so I’m interested in any insights readers might have!

3. Where was WORK radio transmitter?

Today’s last question hits on another topic we’ve discussed frequently in the past – York County’s radio history, and specifically the WORK station!

Reader John Berkheimer writes that he grew up in York, graduating from West York in 1962. He wrote, “My dad’s name was Herman and he ran the transmitter for WORK from about 1946 to about 1960. He was pretty well known at the studio and a great admirer of Frank Renault, who had his own Hammond Organ show. Dad also cut a record on the organ there just for his own fun. In those days the studio recordings started at the label edge of the disk and worked to the outer edge.”

He continued, “Anyway, I was wondering if anybody knows where the transmitter was in those days. My dad took me out there a number of times and put me to work with stuff to keep me out of trouble. I’m pretty sure it was about 5 miles out on the East Berlin Road or maybe LeFever Road. Dad had a friend named Tim LeFever out there and we bought milk from him for awhile.”

John concluded, “There’s no sign of the transmitter building or the three towers on Google Earth, so I thought someone might remember.”

Now this is one I just have no idea about, so I’m hoping my many radio-history-aficionado readers can help John out!

1 comment on “Ask Joan: Some newer questions from readers”