The ABCs of York County: An index of winners

The ABCs of York County series started as an experiment on this blog. In late 2009. I’d noticed that when I posted about the county’s icons – you know, like our potato-chip makers? – I’d get tons of reader comments. 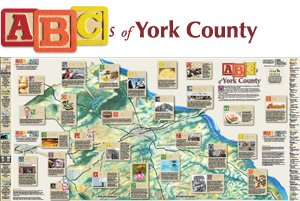 So, I wondered, is there a way to identify just what those icons are? I turned the question over to the blog’s readers and figured out a plan – we’d work our way through the alphabet and use polling – admittedly unscientific – to determine a “winner” for each letter.

I started by taking suggestions for the best “A” of York County for a week. Then, I posted those suggestions as poll choices and allowed readers a week to cast their votes and to make their “B” nominations. The following week, I announced the “A” winner, kicked off the “B” voting, and started taking “C” suggestions. And off we went, following that format through the alphabet.

Some letters were a little hard to get nominations for. Some of the results were surprising. But, by the time we wrapped up this summer, I realized we’d created a pretty good list of the things that make York County great.

Here are the winners, so you can see for yourself. Agree? Disagree? Leave comments with your thoughts!

Jim McClure won originally, but the polls for these are left open, and I came back to this entry to realize he’s now tied with John Rudy County Park!

Rutter’s is now winning, but it was originally tied with Rehmeyer’s Hollow!

Order a poster reprint (Please note – you should choose “large” or “huge” size in your order to get a readable poster!)