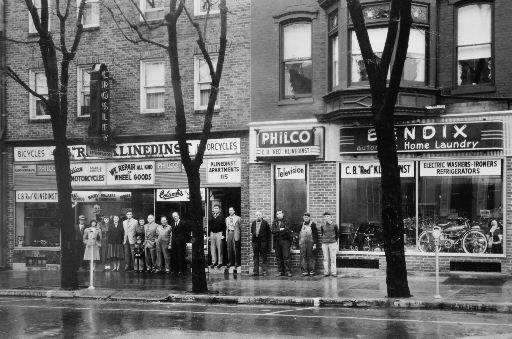 Charlotte Halpin and others from C.B. ‘Red’ Klinedinst’s bike shop pose outside the store at 113-117 S. Duke St. in York, circa 1950. Now it appears the shop’s days are numbered.

But county residents were taken to cycling 100 years ago, as evidenced by the establishment of C.B. “Red Klinedinst’s” shop, still in operation. (Update, 7/1/14: The store has closed, replaced by Redeux.)

Those were days when bike races on the track at the York Fairgrounds were well attended.

Back then bikes meant bicycles, not Harleys… .

Charlotte Halpin has been operating the shop for years.

A death in the family that owns the store might mean this piece of history will pass from sight, according to the following York Daily Record/Sunday New story (6/25/08).

Charlotte Halpin was 14 years old when she took a job at C.B. “Red” Klinedinst, a York bicycle repair shop. It was where she learned to paint, rebuild coaster brakes and other tasks that helped run the family business.

That was 64 years ago and the York resident hasn’t left the shop.

A photo of Halpin’s late husband and four sons, at one time they were all firefighters, sits on the shop’s counter near a police scanner where she listens to emergency calls as she works.

Asked to describe the oldest piece of the store’s inventory, the 77-year-old said, “Me.”

Halpin compared bicycles of past and present, seemingly amazed by the advances in technology.

Still, Halpin said she does miss the earlier models.

“They only went as high as three speeds,” she said. “Nothing’s simple anymore.”

Halpin recalled parents who would bring their children to the store to buy new bikes and parts.

Today, those “kids” now have grandchildren who come to the shop, she said.

“People say, ‘I remember you. You were here when I was a kid’,” Halpin said.

Too often, Halpin is sadly reminded that many of those customers are gone.

“I see their names (in obituaries) in the paper,” she said. “They’re dying off.”

Over the years, the bicycle shop has added other products to its inventory such as appliances.

The glass storefront, which once displayed new bicycles, is filled with houseplants that former tenants from the apartments above the shop had left behind.

In recent years, the shop’s owners have allowed Halpin to operate the business, she said.

“I was really my own boss,” Halpin said.

She said Klinedinst and his family treated her like one of their own.

“They were always good to me,” she said.

Halpin said she’ll be sad when the store closes for good.

“I guess that’s the only way I’ll get out of here,” she said.

Over the years, the business has sold motorcycles, appliances, televisions and furniture.

George Royer, Klinedinst’s son-in-law, became president of the business and operated the shop for 30 years, after Klinedinst died in the late 1950s.

“It’s like a store that time forgot,” she said.