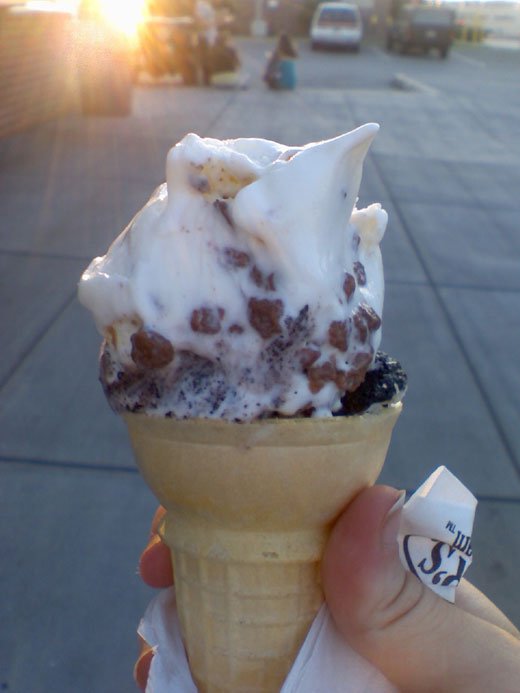 Several of our recent topics of conversation have spurred ongoing replies, so this week, I’d like to keep the dialogue going on some!

In one recent column, I heard from two readers both asking about ice cream spots of the past. Bob Wolf wanted to know if anyone remembered City’s Edge or City Edge in York, and on that topic I heard from Lillian Hoffman, who wrote, “I well remember City Edge, and just talked about it recently. It was on the way to school at Phineas Davis Junior High. We used to stop there on the way home from school and get a 5-cent bag of Senft’s potato chips and a bottle of Pepsi and sat a small table. If we were feeling ‘rich’ that day, for 2 cents extra we could get the Pepsi ‘on ice’ in a glass. A nice lady named Mary ran it.”

Lillian, I was thrilled to hear about that, and I’m hoping even more peole will remember this great spot as well!

In the same column, Warren Hengst asked if anyone knew the name of an ice cream drive-in on the right as you entered Shrewsbury from York. Kay (Wolfe) Bufflap wrote that she and her sister, Mary Wurzbacher, put their heads together for this name. Kay wrote, “Way back in the 1950s and 1960s, it was Windy Hill Ice Cream, owned by a Mr. and Mrs. Ehrhart. Don’t remember first names. Great soft-serve ice cream. Then Tom Clark bought it. There was also an ice cream shop near the square that had homemade ice cream, Bowman’s.”

She continued, “While we are talking about Shrewsbury, does anybody remember Mount Airy store in the point of Mount Airy Road and Plank Road? I got on the school bus there. I remember getting chunks of cheese cut off a big wheel and penny candy. Hope you find these facts interesting.”

Kay, I certainly do!

Finally on that topic, I heard from Jay Harvey, a longtime reader who said he was writing for the first time, noting that he is “of the age (69) where my memory (good or bad) begins to relate to questions of 50 to 60 years ago!”

He began his letter, “I am a native York Countian, having been born and raised in southern York County (actually lived my first 22 years in the small village of Hametown, which is two miles north of Shrewsbury). I attended elementary school in Shrewsbury (currently housing borough offices). There were six grades in four rooms, which developed concentration, but also prepped you for the next year. I then went on to Susquehannock High School for grades 7 through 12, six grades of students in one U-shaped building.”

Regarding Warren’s question, Jay wrote, “By my recollection it was called Windy Hill Drive-In and was a very popular stop in the summer season. They served all kinds of ice cream treats. It was owned by Armand Ehrhart and his wife, whose name I can’t remember. They had a special-needs son who often helped out in serving at the window. (The service windows were the wooden-framed screen windows that slid up and down). They also had a daughter named Ella who, about 20 or so years ago, represented York County in a state/national (?) Scrabble tournament!”

(Interruption here, because I am hoping my friends Marilyn and Don Hake may know Ella, as they ran the local Scrabble club, of which I was a member for a few years, for quite some time, and I would LOVE to add to our Scrabble history.)

At any rate, Jay continued, “The Ehrhart family lived right beside the drive-in in a brick rancher. Both buildings (the home and the drive-in) are still there. The house is now a professional building and the drive-in (after much remodeling) is also a commercial-use building.”

So, I think we have hopefully answered Wayne’s question with the Windy Hill name!

Jay also had more things to share from that area, and continued, “Two miles north of the Windy Hill Drive-In in my little village of Hametown was another eatery that was well-known in the ’50s and early ’60s. It sat diagonally across the road from my house and was known as the Candlelight Inn. It was a drive-in restaurant that served a complete menu of family-style food. It was run by the Geltz family and was a popular stop for truckers traveling the Susquehanna Trail from Baltimore to York and points north. They had delicious barbecue ham sandwiches, which had their own special relish on it. It was a favorite of mine.”

He recalled, “As a boy, I was often sent across the street with money from my parents and returned home shortly with a (paper!) bag full of those delicious sandwiches! Of course, the opening of Interstate 83 diverted most of the traffic from the Trail and the restaurant was forced to close. The restaurant is now a private home.”

This led Jay to a question I am hoping for more information on. “However,” he continued, “I think the Geltzes relocated to Route 74 north of Dover and opened a restaurant there. Maybe some of your readers could confirm or debunk that.” I’m curious about this; if we’re talking north of Dover Borough, that could be the Route 74 restaurant, or one of many of the restaurants that have been in Rossville over the years, or something else entirely; if it’s in the northern part of the township before the borough, it could be one of the many on 74 in the Weigelstown area, too. So I’m very curious!

Finally, Jay wrote, “There is another building in Shrewsbury that has been repurposed in my lifetime. Just two blocks north of the original square, a block building was built in the early ’60s. It was built so kids could race their slot cars there. My neighbor and I would bike the two miles into Shrewsbury and rent time on their track. You provided your own slot cars and you could spend a good bit of time there. Of course, you were always trying to get yours to go faster by tweaking it! Today the building is a NAPA Auto Parts store.”

He concluded, “I am even old enough to remember when Shrewsbury had NO traffic lights, just stop signs on Forrest Avenue at the center of town! … Keep the memories coming!” That we will be glad to do, Jay, and thank you so much for contributing to them!

In an earlier column, reader Kenneth Paup had asked if anyone knew about the “five-mile” and “10-mile” houses along Lincoln Highway.

Longtime reader Paul S. Wolfgang noted that these were Conestoga wagon stops on the Lincoln Highway, headed west from York to Gettysburg, to rest the horses and “provide a libation for the drivers.” Paul noted, “Both buildings still standing. The first is approximately five miles west of York near the Spring Grove road on the northwest side of Route 30, and the second approximately 10 miles from York at the Village of Farmers on the side south of Route 30.”

Paul noted that at the second, “During the Civil War, a delegation from York headed by A.B. Farquhar met with General Early or the CSA in a move to save York from burning just prior to the Battle of Gettysburg.”

Paul, thank you so much for that info – I will definitely be keeping my eye on my odometer next time I’m traveling that way, as I’m sure will many other readers!

Finally for today, I want to send a huge thanks to Michael Snell, Superintendent of Record for York Adams Academy, which I talked about in a recent column as the current incarnation of what used to be known as York County High School.

After reading that column, Michael wrote and said, “Thanks for your kind words about our program whether it was the York County High School or now York Adams Academy (YAA). I currently serve as the Superintendent of Record and am equally proud of our success with graduating students. I would like to make one clarification… YAA is not a public charter school as you stated in your article. We are officially referred to as a ‘Special Program Jointure’ by the Pennsylvania Department of Education. Bottom line, we are a joint public school that issues a joint diploma from YAA and the sending/member school district.”

I let Michael know I was very glad for that correction and that I would be glad to share that in this column so that others would know the distinction as well!