Reader Gretchen Frederick shared a copy of this brochure with me. She found it in her mother's ephemera.
Posted by Joan ConcilioAugust 23, 2020August 23, 2020 Local memoriesNo Comments

Gretchen Frederick of Sparks Glencoe, Md., sent me something cool a couple of years ago that I just never made the time to digitize until now.

“Enclosed is a document that I found among my late mother’s ephemera. She kept everything!” Gretchen wrote.

She continued, “I’ve noticed Playland mentioned in your column on several occasions. My best friend and I went roller skating at Playland every Thursday evening when we were about 14… 1957-1958. We had our own skates and wore twirly short skating skirts. I believe my mother made mine.”

About the brochure, she wrote, “This brochure is a comprehensive description of the designing and building of Playland. It opened in 1941 and everything about it was top notch. I do not find an author of this booklet but it was definitely someone who had all the information regarding the oriigns of Playland roller rink.”

“I grew up in Dallastown in the ’40s and ’50s and moved to New Freedom as a teenager. I relate to many tiems in your columns. Always enjoy them,” Gretchen concluded.

While you can probably read some of the Playland brochure’s info from the images I’m including with today’s column, to best read the whole thing, download a PDF copy of the brochure here. 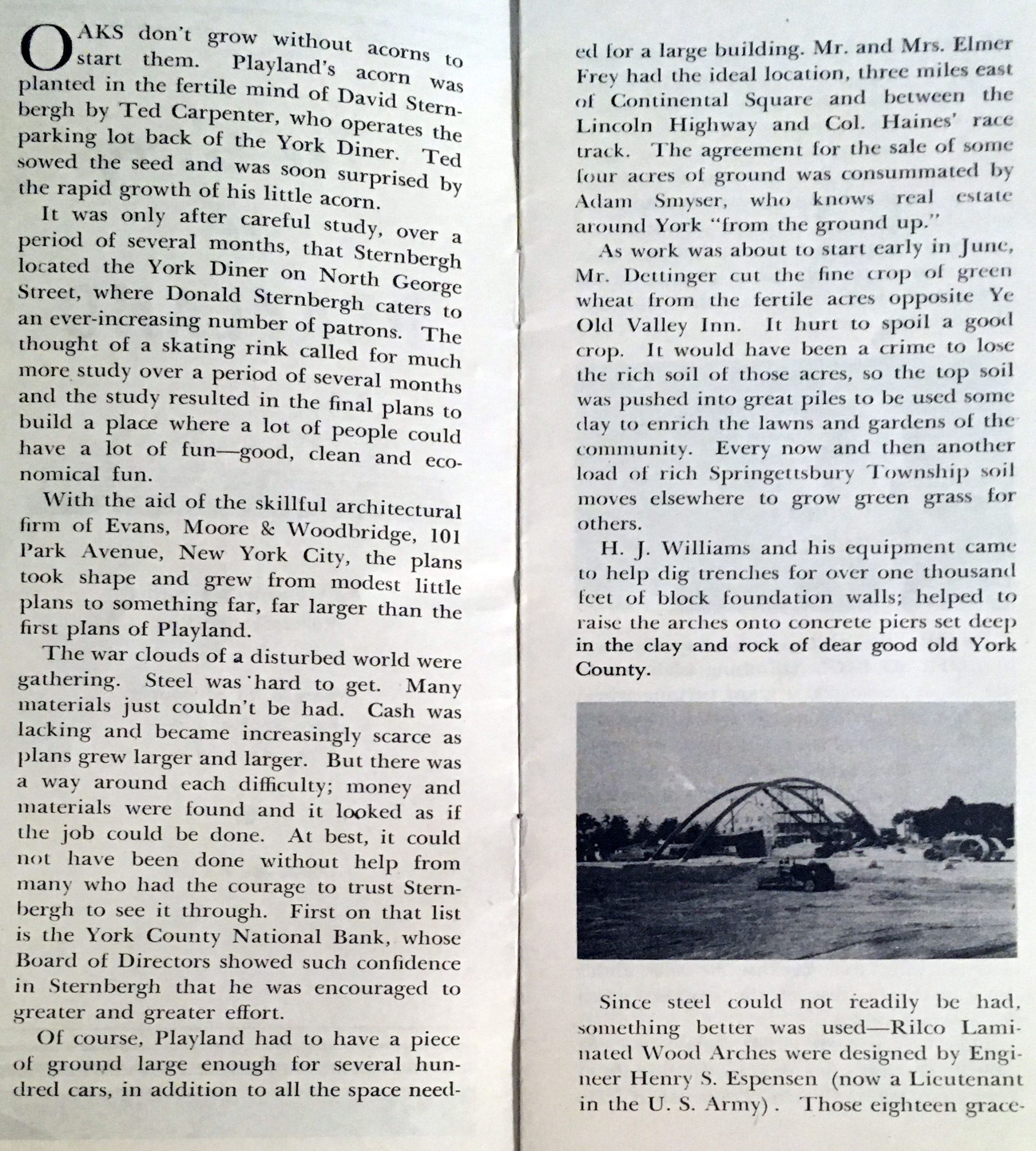 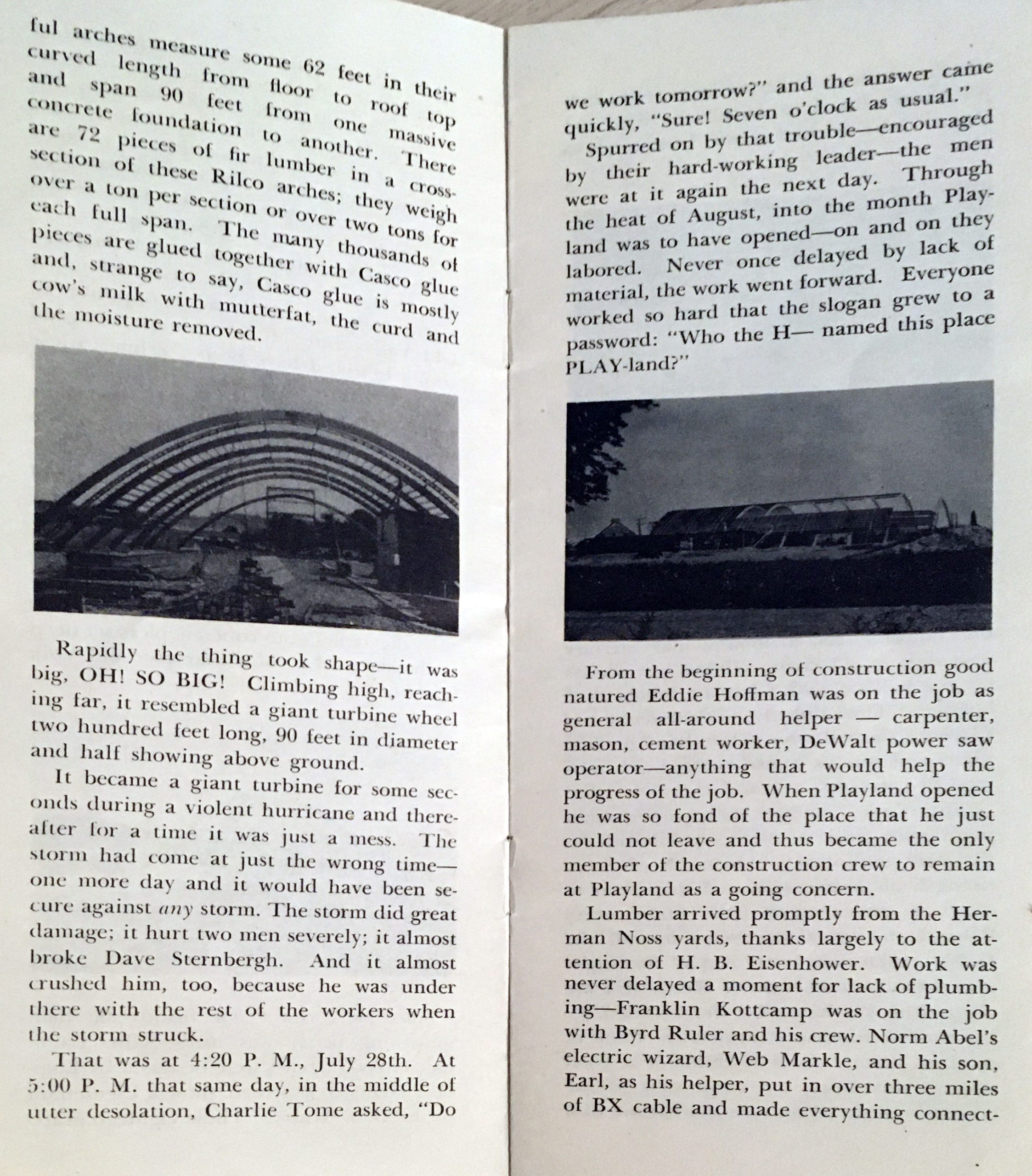 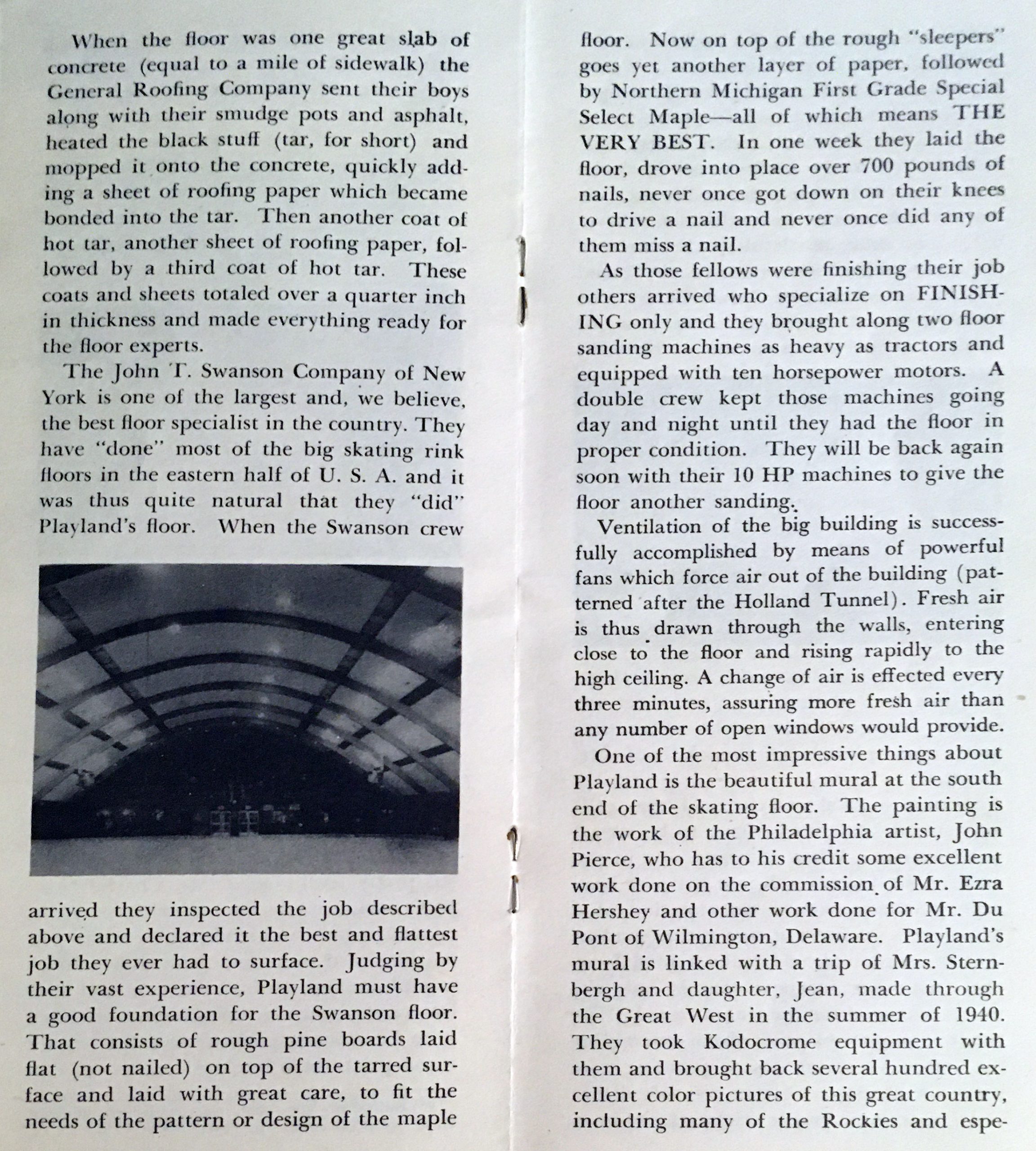 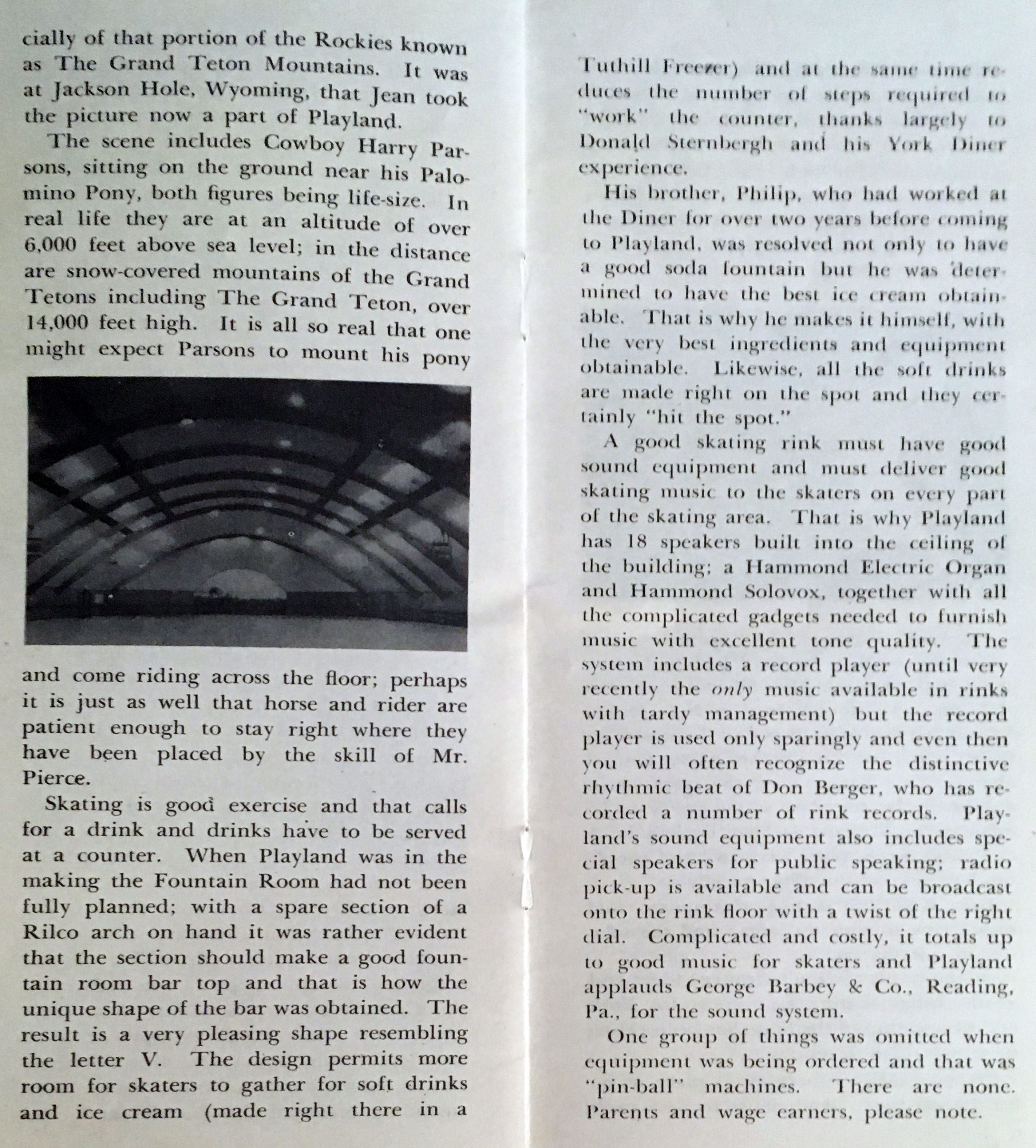 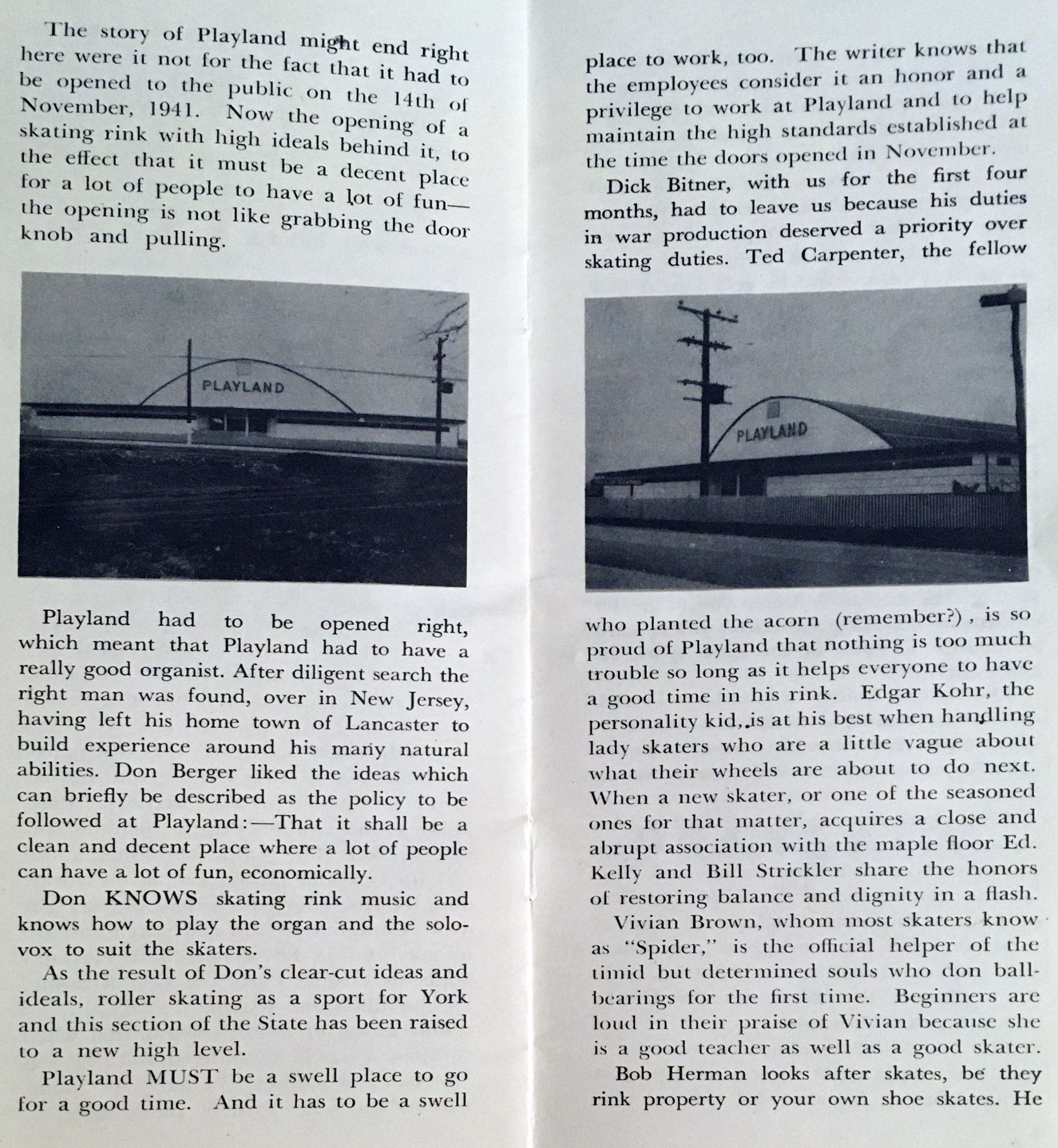 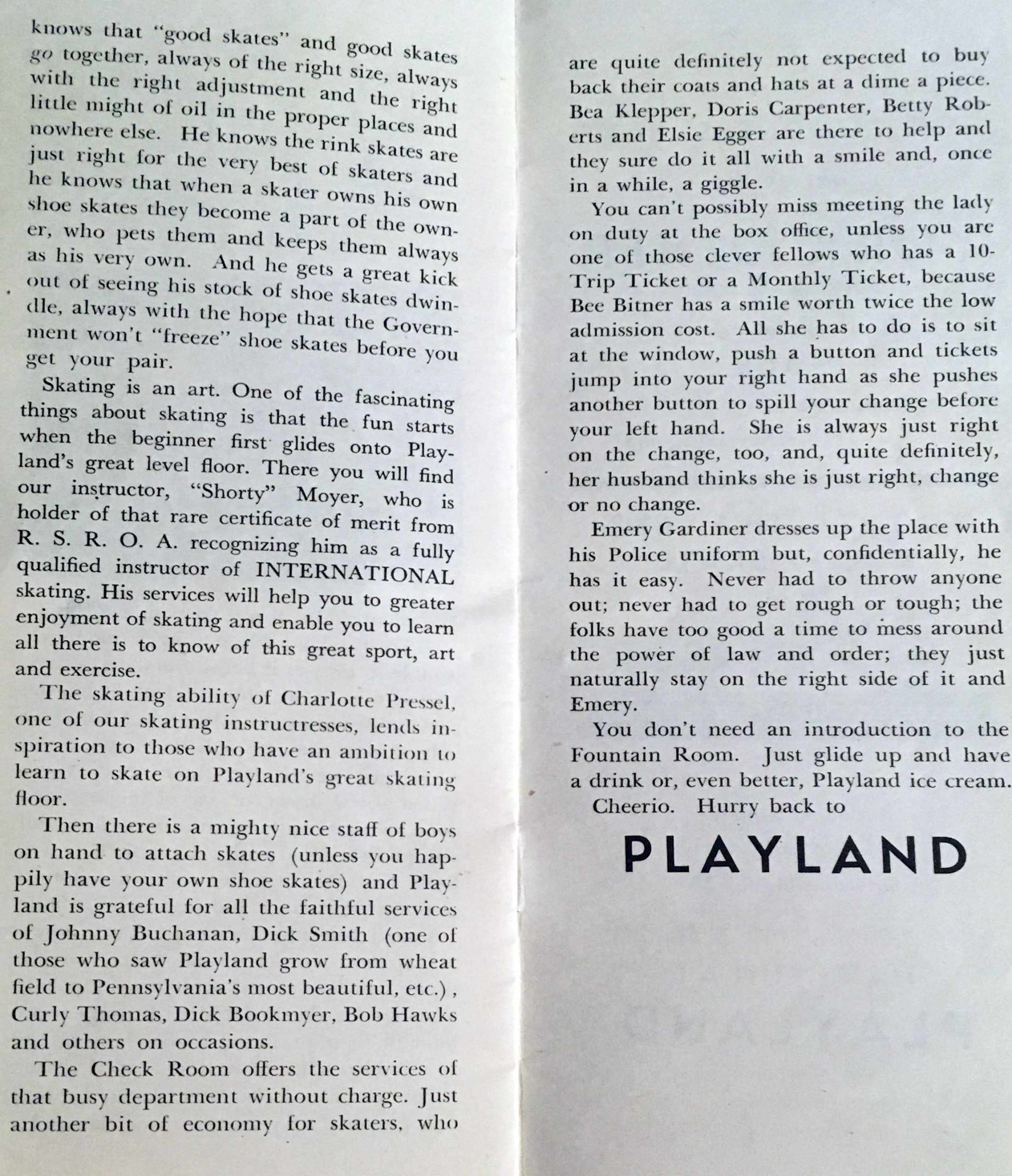 I have a few more roller rink memories to share today, too.

Jeff Gohn commented on a previous column about Playland online, noting, “I was a professional roller skater being taught by Jim Wells at Playland in the late 1950s and 1960s. John Conway ran the place for Mr. Sternberg.”

And Jane Jacobs noted, “I really enjoyed your articles about Playland. I spent a lot of time swimming and roller skating there.”

Finally, I have a note from commenter Lisa, who remembers other area rinks, open more recently. She said, “I went to Roll-R-Way East til it burnt down then I went to Roll-R-Way West. I started skating when I was 4; when I was 17, I became a mom and lost interest in skating. I have so many memories from both rinks but mostly West. I even remember some names of people I met there! My first kiss even happened there! I stopped going in 1995. Was anyone else there in the late 1980s til 1995?”

That’s an era I remember, though I was probably just a little too young to hang out with you, Lisa! I would have gone to Roll-R-Way West in Delco in the late ’80s and early ’90s for elementary and middle-school parties. We all loved to watch the “big kids” skate and dreamed of being cool enough to come without our parents someday!

A few other rinks either I remember, or I’m interested in memories of: