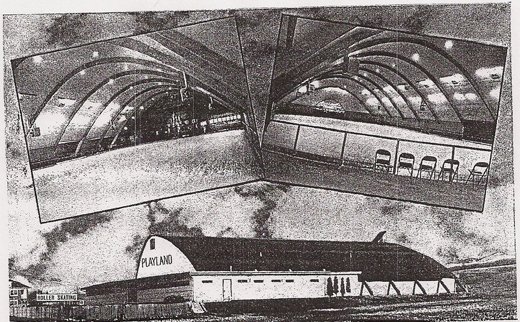 Today’s post is very much thanks to the research of frequent commenter Audrey Lerew. She’d been digging in to info on York’s roller-skating rinks at the Heritage Trust library, and she sent me all the details, saying, “It would be cool to see how many other people remember.”

She also included the photo above, which shows Playland inside and out. Audrey spent a lot of time there, and said she really enjoyed finding out so much information!

What follows are Audrey’s notes. I encourage you to take a look and see what memories this information sparks for you. I’d LOVE to hear your thoughts on Playland and other skating rinks!

First roller skating rink was at the corner of Pine St & Reineke Place. It was destroyed by fire in the late 1890’s.

On the west side of 525 E. Market St there was an abandoned tannery. It was to become The Great White Rose Arena. It was renovated and remodeled. That was 1898. They had bicycle races, radio acts and played polo on skates. Skates were ball bearings and had to be oiled frequently.

They had a wood floor. 250 to 300 people skated. This was owned by J.W. Richley and managed by Charles “Poppy” Harkins. They eventually had live organ music.

I am trying to find the exact date it burnt down. It was in the 1948 City Directories but not in 1950. York Theatre was in the front.

Also found out in 1906 the second floor of the Latimer Small building on North George Street opened as a rink for three seasons.

Playland Skating rink had a concrete floor. They started building it in 1941 and in July a wind storm came through when half built and destroyed it all. So next day they rebuilt and it opened Nov 14, 1941. It lasted 44 years. After the war it was renamed Roller Rink. Eventually it became Roll R Way East and another was built in the rear of the Delco Plaza which was Roll R Way West. Roll R Way East burnt and completely destroyed Nov 23, 1985. I am including a nice picture from a postcard of the exterior and interior of Playland. That was located across from East York Walmart. Playland was owned and operated by David Sternberg. They had live organ music.

Donald Faircloth who was a York City Bus Driver opened a rink in Weigelstown. I am not sure how many years it was there.

There was also a rink in Hanover. And Haar’s of Dillsburg also had a rink.

While researching, I found the original skates only had one wheel in the front and two in the back. Later they came out with what they called the “straight spindle” which gave you four wheels.

As a kid, I used to skate around the blocks and I had metal skates with four wheels and two clamps on the front sides, which you tightened to your shoes, and then a strap came around the ankle.

Audrey, thank you AGAIN for sharing this with us. Any other skating memories? I have my guesses as to who will respond… based on previous comments!