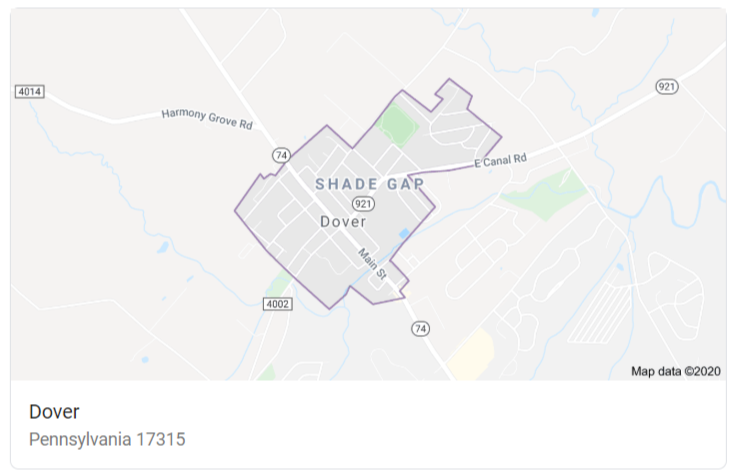 Today’s column is a fun set of questions gathered over the past few years about “why is this place called what it is?” This topic has been so popular that, for many years, I did a series called Names of York that discussed the people for whom local places were named – like Morgan Cousler of Cousler Park in Manchester Township and so on.

1. Shade Gap appearing on Dover map
2. What was the battle?
3. Speaking of Cousler Park…
4. Finally for today, a canal?

Today’s first question comes from a longtime reader, current friend and former teacher of mine, Cindy Snyder, who asked me, “Do you have any info on why Shade Gap shows up on some maps of Dover borough?” You can see such a map with today’s column – that’s a screenshot of a Google Maps view of Dover, and at that zoom level, the Shade Gap name appears, but when zoomed in more closely, or farther out, it doesn’t.

There is a tiny Shade Gap borough in Huntingdon County, maybe an hour and a half’s drive west and a little north of us, known for being the site of a 1966 kidnapping that led to what was the largest manhunt in U.S. history at the time. That doesn’t help us at all, though!

If it were a print atlas, I’d say it might be some kind of map trap – something put in by map publishers to make sure their work isn’t plagiarized. A long time ago, in very geeky fashion, I went through the ADC map book of York County that we used at the paper and found several, including made-up little “towns” named Ostinato and Hooting, and was very proud of myself.

But I’ve never heard of Google doing that, so I have no idea where Shade Gap came from. Cindy is part of the Greater Dover Historical Society, and between the two of us we have combed through most of the regional histories and found nothing, so we are at the mercy of my readership now. Any ideas?

Another such question came from reader Bart Stump, who wrote, “In my travels, I’ve come across Battle Hill Road in Brogue. The name struck me as odd and I was wondering if there’s some hidden history here worth investigating.”

This Chanceford Township street was one name about which I was able to turn up some info, thanks in large part to the fact that there was a one-room school on that road, Battle Hill School. That’s important because schools are things we’ve tended to document the history of, whereas streets themselves often get overlooked!

Red Lion Area Historical Society’s website has a page about Chanceford Township one-room schools that says the following: “Battle Hill School was located along Battle Hill Road, to the east of the intersection with McKinley Road. It is believed the school got its name because of Indian battles which took place on this site.”

So, whether that’s something we can further document, I’m not sure, Bart, but at least I can tell you what the prevailing thought is on this street name!

I was inspired to put together this column (and another, which should be published in the coming week or two) on names because of a note from Dan Sindlinger, who
had written on the topic I mentioned at the beginning of this column, Cousler Park!

Dan wrote, “I’ve searched on the Internet and written to the township but have been unable to find out who Cousler Park was named after. I’m also very curious about which pronunciation of their name the family preferred, ‘oo’ as in ‘food’ or ‘ow’ as in ‘cow.’ Can you help?”

I sent Dan a short 2010 item I wrote, noting that Morgan E. Cousler donated 52 acres in 1976 to start the park, which now covers about 106 acres in total at Church and Greenbriar roads in Manchester Township.

Unfortunately I do not know about the pronunciation for sure, though people who’ve known the family seem to say it more “Cowsler,” but that’s just anecdotal!

4. Finally for today, a canal?

The last question for today is from David A. Clugh, who wrote, “I am curious as to why Canal Road is named as such. Was there a canal at one time through Dover?”

David, this was a fun one too! While Dover might seem like an unlikely home for a canal, don’t forget that the road we know as Canal Road starts all the way up in the York Haven area, along the river, and runs almost all the way to Adams County. It turns out that the first canal in Pennsylvania, completed in 1797, was a one-mile canal that bypassed the Conewago Falls in York Haven, and Canal Road takes it name from that!

Jim McClure wrote about it in his “Never to be Forgotton” book, which you can probably find at the York County History Center (and, if not there, the York Emporium definitely has copies)!