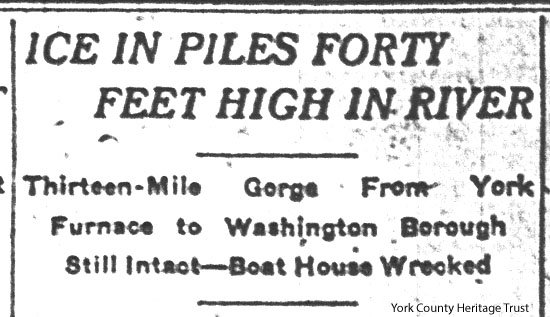 Last week Jim McClure included a link to photos on his blog post of a few years ago of Susquehanna River ice pushing over the banks in January 1959. They were originally shared by Jim Buckner, and taken by his father.

While looking for something else yesterday on the newspaper microfilm at York County Heritage Trust, I came across the article below in January 19, 1911 issue of the York Gazette:

The condition of the Susquehanna River was unchanged yesterday, the thirteen-mile ice gorge backed up from York Furnace to Washington borough remaining firm. A temperature below freezing, solidly welded the cakes of ice together which are piled up to a height of forty feet at some places. Above Washington Borough, the river is open, as is the case below the gorge. Safe Harbor is still in danger, for all the country roads are under water and ice, making travel impossible. Some of the streets are still covered with water. Reports from Pequea, which was cut off by wires being torn down, are that the new boat house was crushed to pieces, the country bridge across the Pequea creek was carried out of its position and a number of houses were flooded. Thousands of people have made trips to the river, to view the piled up mass of ice.”

The reference to Safe Harbor is to the village; sources indicate that construction on the dam didn’t begin until 1930, and it went online in 1931. Construction was started on Holtwood dam in 1905, but, because of financial issues slowing completion, that power plant did not start operating until 1910.

Every so many years, conditions are right (or wrong), and great chunks of ice are sent over the river banks, taking out any structures in the way. From the time I was a child, I remember going by Long Level and Wrightsville to survey the sight, just like the 1911 spectators.

Click this link for the Safe Harbor Water and Power Company homepage for updates and warnings on present river stages and ice conditions.