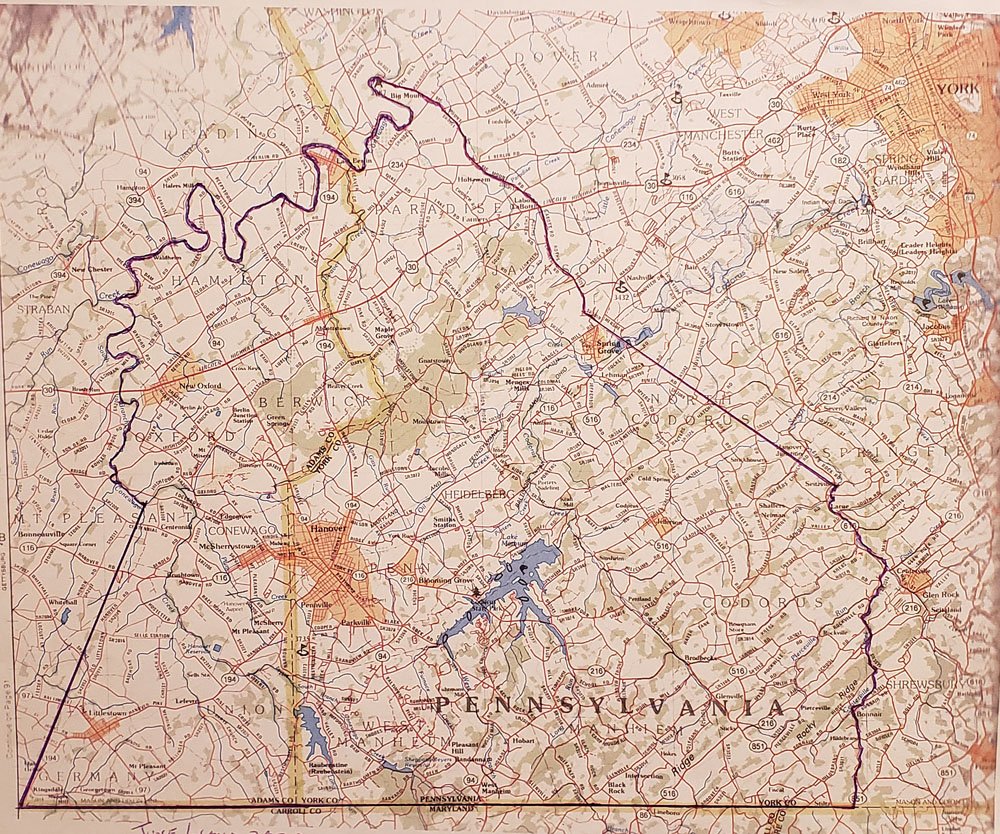 Many of you might know that Adams County was created from the western part of York County in 1800.  It was named for the sitting United States president at the time, John Adams.

If some local state lawmakers would have had their way in the 1830s, then-president Andrew Jackson would have been similarly honored, again reducing the size of York County, as well as taking a piece out of Adams County.  Hanover, as the county seat, would have been in the center of it all.

Here is my recent York Sunday News column telling about the efforts.  I am also including a copy of a contemporary sketch from the York County History Center files, as well as my outline on a current map showing the approximate boundaries of the proposed Jackson County.

Jackson County would have altered York and Adams county borders

Hanover, the county seat of Jackson County, Pennsylvania.  What?  A current Pennsylvania map shows that there is no Jackson County and that Hanover is a borough in the extreme southwestern part of York County.  Petitions, however, for such a county were presented several times to the state legislature during the 1830s.   A few were also submitted against the idea.  The proposal was considered seriously enough several times to go to a legislative committee.

Abstracts of minutes of the Pennsylvania House of Representatives name only the date each was presented.  I hope to find out more about the people and reasoning behind these proposals when research facilities fully open again.  Why carve a new county out of the western portion of York County and the eastern part of Adams County?  Admittedly, proposing new Pennsylvania counties was quite common in the 1830s, with similar petitions presented each session, including several in other areas to be named Jackson.  After all, Andrew Jackson was U.S. President from 1829 to 1837, even though the petitions for and against new counties didn’t follow strict party lines.

As early as 1829 the York Gazette, quoting the Shrewsbury Harbinger, reported that “in a certain district of this county, several persons contemplate to make application to the Legislature for a new county out of York and Adams.”  The January 17, 1832 Gazette reports that a petition was presented to the state House for a county out of parts of York and Adams, to be called Jackson.   The Journal of the Forty-Second House of Representatives of the Commonwealth of Pennsylvania for that year states that a bill to do so, No. 67, was reported by a committee, read and laid on the table (action postponed or suspended).  The bill was soon again considered several times by the House, as a committee of the whole.  During this session “Mr. Donnell presented three remonstrances from sundry inhabitants of York County, against the erection of a new county out of parts of York and Adams counties to be called ‘Jackson.”  Mr. Rankin presented a similar remonstrance.  John R. Donnell and John Rankin, both Democrats, were two of the three York County Representatives.  On February 10 it was agreed to “postpone to further consideration of the question together with the bill for the present.”

Still another petition from York and Adams county residents to form a Jackson County was presented in the 1836-37 session.; it once again went to committee.  The issue heated up once more in the Forty-Eighth House in 1837-38.  Another bill, No. 227, was considered and laid on the table in January.  York County’s three representatives:  Samuel Brooks, Jr.; Martin Shearer and John Thompson were all Democrats.  Adams County’s two new representatives were Whigs Charles Kettlewell and Thaddeus Stevens.

The February 13, 1837 Adams Sentinel reported: “Our neighbors in Hanover appear to be quite in earnest about their new county; obtaining petitions, and gathering subscriptions for public buildings, &c.  We rather think, if any very considerable slice is taken from our little county, we may as well drop the concern.” The paper went on to say that more speedy justice couldn’t be an excuse, since Adams County courts already had very little activity each session.  Jacob Wirt, prominent Hanover businessman and staunch Whig, was seemingly one of the leading advocates for a new county.

On March 5 Shearer and Thompson presented three petitions for Jackson County, and also proceedings of separate meetings of citizens of Paradise, Manheim and Codorus townships and Hanover Borough in York County and Berwick and Conewago townships in Adams County, all in favor of the new county.  Kettlewell countered with a remonstrance from Adams County inhabitants.  I have found no references after that to what happened to this last movement, but since there is no Jackson County, it was evidently permanently tabled somewhere along the way.  York County eventually ended up with a Jackson Township in the general area, formed from the eastern part of Paradise Township in 1853.

The York County History Center has a copy of a hand-drawn map “Plan of a New County to be composed of parts of York & Adams County to be called Jackson County as prayed for in the Session of 1837-8.”   It was to be composed of about 200 square miles/128,000 acres, with about 15,000 inhabitants The 1837-38 boundaries are: “Beginning at the point when the public road leading from Littlestown to Frederick T. intersects the Maryland line—thence by a straight line to Sneeringers, late Adams, mill—thence along little Conewago Creek to when it intersects Big Conewago Creek—thence along Big Conewago on the South side to Emicks mill—thence along a Road leading to Wiests at York Road, thence by a straight line to Brickers Mill (Zieglers Tavern crossed out) to intersect the division line between Shrewsbury & Codorus Townships—thence along the said division line to where it intersects the Maryland line, thence along the said Maryland line to the place of Beginning.”

You can pretty well trace those boundaries of the proposed county on a present day map by comparing it with the 1821 Small and Wagner Map of York and Adams Counties.  It shows the Adams, Emicks and Brickers mills and Wiest’s tavern.  I also consulted the 1858/1860 wall maps and 1872/1876 atlases of Adams and York counties.

Today you would start where Route 194, the Frederick Pike, crosses the Maryland line.  The straight line slightly northeast would meet the south branch of the Conewago a bit northwest of Centennial, where Hill Road runs along the creek.  After meeting the main branch of the Conewago, it would follow that creek northeast to near Big Mount.  The Emick/Emig’s mill building has been converted into apartments and still stands on the south side of the creek at Big Mount Road.

The line then turns southeast, probably following Big Mount Road, which becomes Labott/Roth’s Church Road as it crosses Route 30.  Weist’s tavern was near the eastern end of Spring Grove. The straight line to the dividing line between Codorus and Shrewsbury townships would meet the south branch of Codorus Creek at Seitzville, the probable Bricker’s mill location, and then follow the Codorus/Centerville creek/line between the townships to the Maryland line, where the boundary would turn west along the Mason-Dixon Line back to the point of beginning.

I will report any further information or corrections to the boundaries, or any new information in a future post.