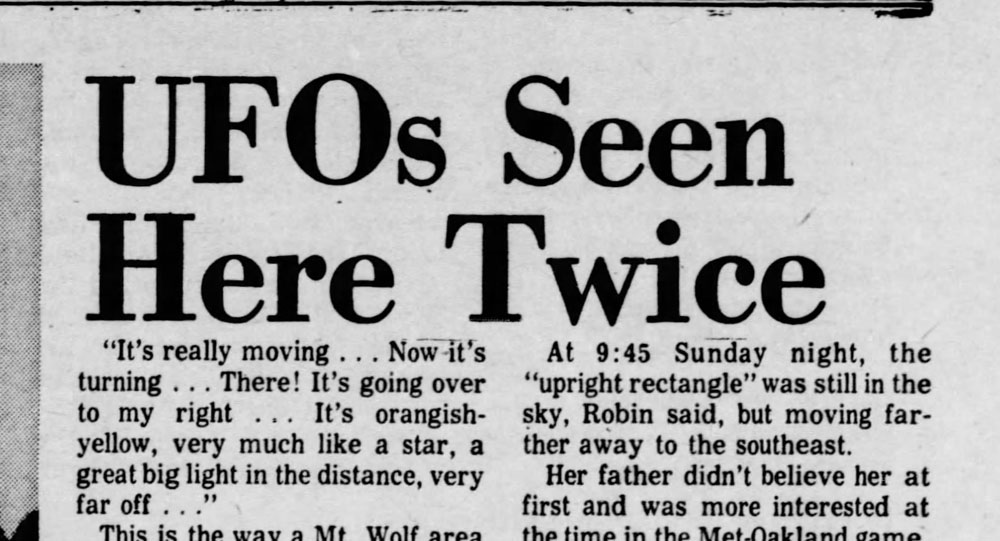 A few years ago I did a York Sunday News column on UFOs, finding quite a few newspaper articles on local sightings of what were first called “flying saucers.”  I gleaned most of information from newspapers.com, which I access at the York County History Center Library and Archives.  Since that time, YCHC has worked with newspapers.com to have many more of the York newspaper microfilms scanned and made available online.  So as soon as YCHC reopens April 1, I will be back in the library looking for more articles. In the meantime, I want to share information from a recent email I received in connection with the 2017 column and ask if you might have any information on a particular 1971 sighting.

Ever since the column appeared over three years ago, I have had personal incidents, both local and national, shared with me.  As time passes and our knowledge of space and technology becomes more sophisticated, people are more inclined to share experiences that they have not talked about because of concern that others would scoff.

In fact, the U.S. Senate Select Committee on Intelligence recently directed that a report on “Unidentified Aerial Phenomena” be prepared.  The Committee seems to be concerned that these unidentified aerial phenomena might be the work of foreign adversaries, and they want the incidents thoroughly investigated, whatever the source.  To read the pertinent section of the “Intelligence Authorization Act for Fiscal Year 2021” click here and search for “unidentified.

I will keep all identities confidential, but I would love to hear from anyone that might have witnessed anything unusual in the vicinity of Glen Valley Road near Glen Rock, sometime in the summer of 1971.  Something was definitely sighted by my correspondent, a sibling and parents while they were driving to visit relatives one evening after dark.  At first sighting, it was not much above treetop level, then it moved farther away, but it was still visible.  The object stayed in the area long enough so that the family and relatives were able to watch it for a while after the children and their parents reached their destination.

The parents and the two now long grown children haven’t discussed the incident, even among themselves, until recently.  People just didn’t talk much about sightings of unknown origin back in the 70s.  Again, I think we have become more open to possibilities in today’s age of rampant technological advances.  I am impressed that the members of that family do still vividly remember that night 50 years ago.  My correspondent stresses that “Driving in a car at night was NEVER the same.”

A quick Google search brings up many sightings, both current and in the past.  Most describe the objects sighted as round or oblong with fewer triangular or rectangular shaped.  Most mention lights, and almost all comment on their moving much faster than any known aircraft.

Again, I would love to hear if anyone else could have witnessed this incident, as well as from anyone who has had similar experiences in the York County area over the years.  We have come a long way from laughing at “flying saucers” to wondering about “unidentified flying objects” to our government now mandating studies of “unexplained aerial phenomena.”

You can also find all kinds of websites on UFO sightings, from obvious fiction to some that seem to seriously and rationally record and tabulate what people have observed.  It is interesting that Pennsylvania seems to be one of the states with the highest number of reports.  And York has the second highest city in Pennsylvania using the ratio of sightings per 100,000 residents, with a ranking of 77 of 447 cities nationwide.

What have you seen?  You can email me at ycpa89@msn.com.