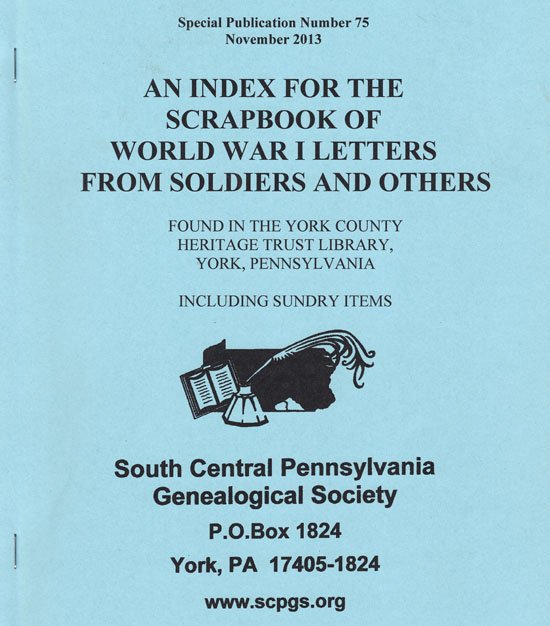 I don’t know as much as I would like to about World War I, including the involvement of York County people in that Great War. This year is the 100th anniversary of what was then thought to be “the war to end all wars.” I hope to learn more, using the South Central Pennsylvania Genealogical Society’s latest publication An Index for the World War I Letters from Soldiers and Others Found in the York County Heritage Trust Library, York, Pennsylvania, Including Sundry Items.

The original large scrapbook was donated in 2005 to the YCHT Library and Archives by Ruthetta Jacobs, charter member of the SCPGS. It had been kept by her aunt, Mildred Grass, and was filled with newspaper clippings of letters from men and women serving in the American Expeditionary Forces, American Red Cross and with the YMCA.

Because of poor condition of the original, the SCPGS digitized the pages, which were then indexed and edited by SCPGS board member Margaret L. Bouillon Burg to produce SCPGS Special Publication 75. A printout of the scrapbook is available for use at YCHT, and digital copies are available on the library’s public computers. A cd of the scrapbook ($12) can be purchased from SCPGS. The 64-page index ($10), as shown above, may also be purchased from the South Central Pennsylvania Genealogical Society through their website, or, in-person only, may be picked up from Amanda Eveler, Assistant Director of Library and Archives at York County Heritage Trust.

Besides an every name index to the letters, the publication also includes a World War I time line and examples of the letters. There are also listings of York County women and York County African Americans who served in the war and a detailed list of those York countians who gave their lives in the conflict. The number of persons on all these lists might surprise you.