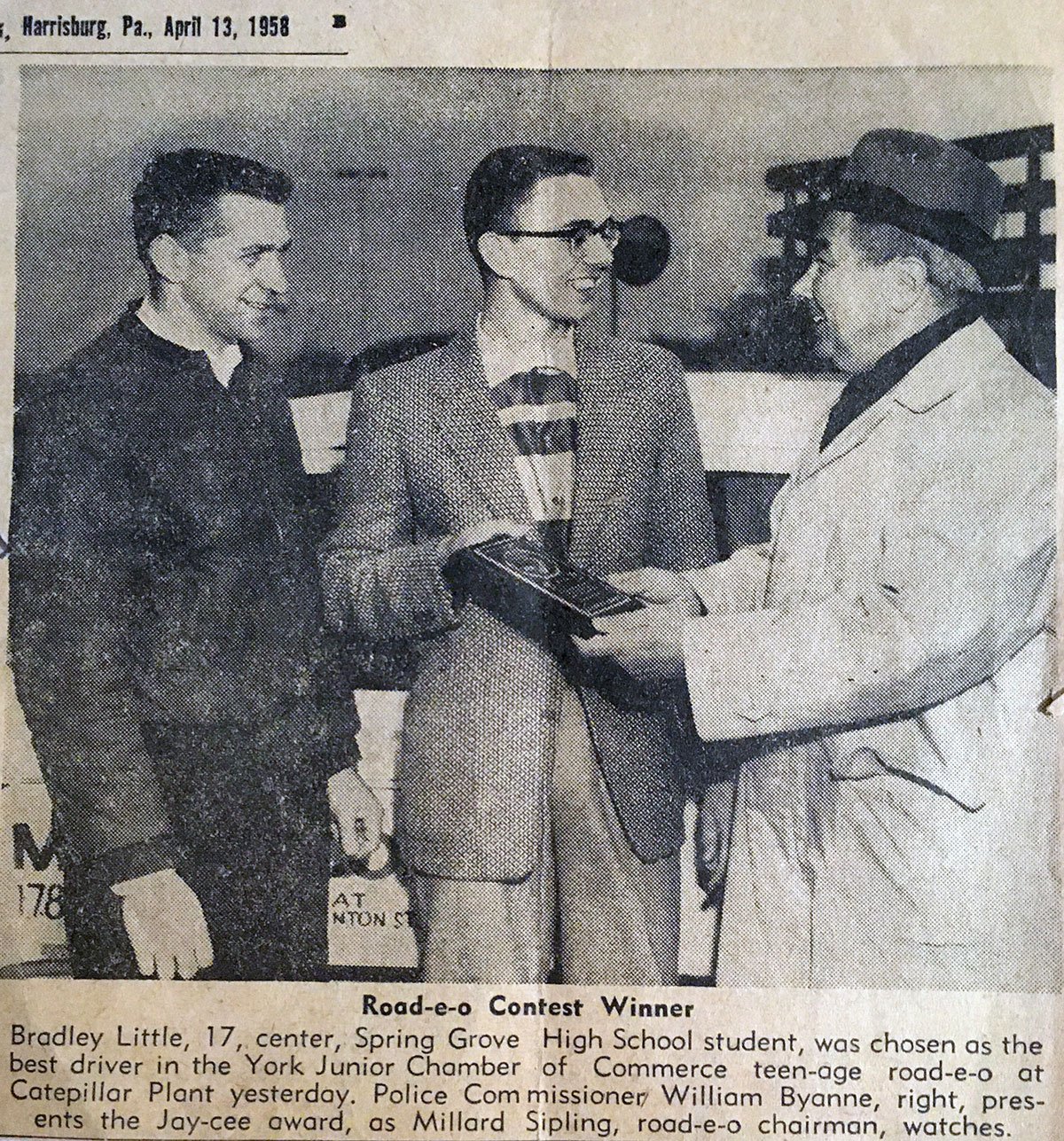 Barbara Little of York Township shared this newspaper clipping from a teen safe driving event that took place in 1958. Her husband, Brad, is pictured at center; he was the event's winner.
Posted by Joan ConcilioJune 3, 2020 Ask Joan, Local memories, Southern, York City/Suburban1 Comment

Today’s column spans years in many ways – we talk about a company founded in 1903 and events from the 1950s, and the letters they’re about came to me via both mail and email from 2017 to present. What a mixed bag!

Some time ago, reader Barbara Little of York Township wrote and shared a few newspaper clippings with me, along with a note wondering if anyone remembered the Road-E-O event held in 1958.

She wrote, “Back in ’58 there was a teenage safe driving contest held by York Junior Chamnber of Commerce. A dinner was held at the Lincoln Woods Inn. Rewards were given to four young drivers. The Road-E-O was at the Caterpillar plant.”

Her husband, Brad, was one of those four winners. I’m curious if this event was only a one-time thing or if it was held in other years as well! I’d love to hear more.

Quite some time ago, I had a letter from reader Rick Horn. Rick wanted to know if anyone remembers the block parties held on the 800 block of Wayne Avenue in the late 1950s. “I think it was for the Goodwill Fire Company on East Market Street,” he wrote. “Every year, they would close off the block in the evening for several days and had a big block party with games of chance and entertainment. I can remember going to my uncle’s house on the block and sitting on his front porch all evening and playing the games.”

He continued, “We always played the bucket game where you could win a galvanized bucket full of canned goods. This is the same game the post office always played at the Fair. The canned goods helped with our large family but the buckets were even better as we needed them to help do the laundry plus that was what we used to keep cool in the summer along with mom’s wash tubs.”

Rick, that sounds like a great time – and I’m hopeful that you were a regular winner! If anyone else remembers these events – or other area block parties – I’d certainly love to hear about them.

Finally for today, I want to share a request from Lee Manifold, a reader from the New Park area of southern York County.

Lee wrote, “I’m looking for info on the York Eastern Telephone Co., which I think my father may have been instrumental in back in the 1940s or 1950s. There is some of their old phone equipment on display at the Ma & Pa Railroad site in Muddy Creek Forks, but information is hard to come by… Any info you have or can point me to would be appreciated.”

I did read just a little about that display on the Ma & Pa Railroad Heritage Village website, which states that the telephone room, a small cubicle in the A.M. Grove General Store building, contains one of the switching machines from the Stewartstown exchange of York Eastern Telephone and a period telephone. While the village is closed now due to COVID-19, it says it will post updates at maandparailroad.com when available.

A few other interesting things I found:

While none of that is particularly helpful, it was fun for me to look into, and I’m hoping some readers can give us more info on this phone company!