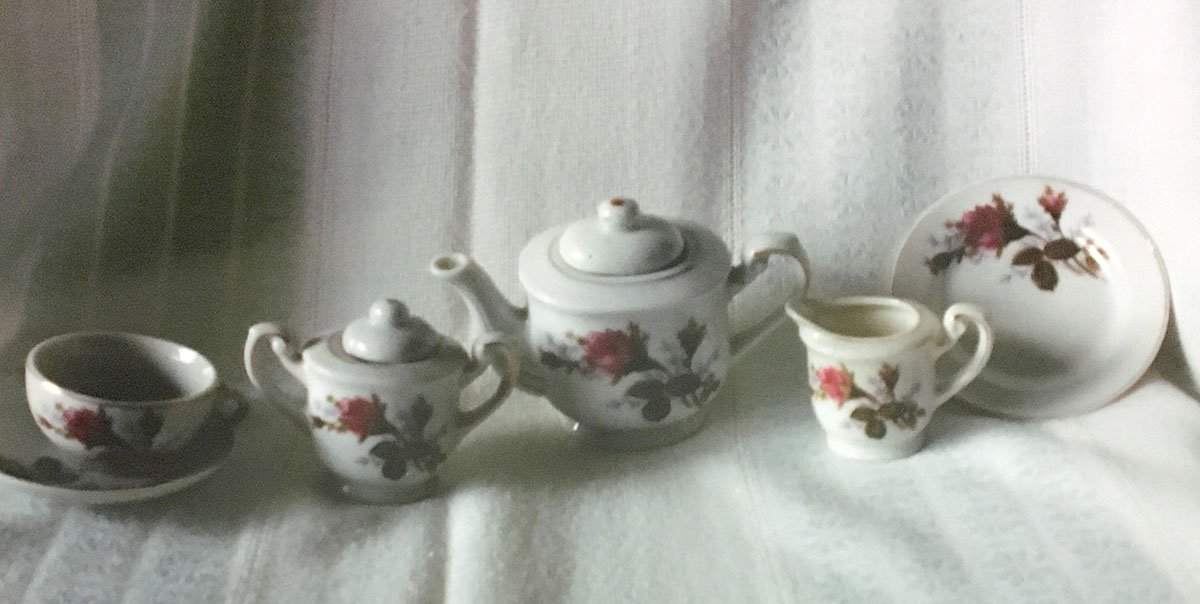 I am in the middle of sorting ALL my backlogged emails and mailed letters into topical divisions to make future column-writing a bit more manageable. So, expect to see odd selections of old and new topics, even more than usual, over the next few weeks!

Nancy Hedrick of Chanceford Township mailed me a letter and photos after reading a 2018 column where we talked about the L&H 5-and-10 store in Dallastown.

Nancy wrote, “Several months ago, you mentioned the Dallastown 5-and-10 in your column. That 5-and-10 was a favorite shopping store, so much better than Murphy’s 5-and-10.”

She continued, describing the photos you see with today’s column: “About 1967, I bought this china tea set for my daughter Amy (age 3) for Christmas. Then, thought she’d break it, so I bought her a plastic set to play with. So this set stayed in the box with the original paper and strawlike wrappings. This rosebud pattern tea set has six plates, six tea cups and saucers, one creamer, one sugar with lid and a teapot with lid. The lids have a gold dot on the top knob. The label on the box is No. 3007 – Toy Tea Set – Made in Japan.”

She added, “This set also includes a thin wooden kitchen cabinet. The design on the box is also unique. Do not remember what I paid.”

What was perhaps the neatest part of this to me is how similar this was to a porcelain tea set I had as a child in the early 1980s! Mine also was white ceramic or porcelain and had a rosebud design. I am not positive, but I think it may have come from D.E. Jones or Gee Bee’s, two places where my family bought a lot of my holiday gifts. I seem to remember it having a styrofoam holder part where I could tuck away the plates – the kind that squeaked when you pulled something out of it. I enjoyed it for years. So, Nancy, thank you for sharing that memory, which triggered my own!

A couple of weeks ago, I shared a column with excerpts from the memoirs of reader Robert Breneman regarding Harry Allaman, a longtime Maytag dealer in York who was also known for his “Call of the Outdoors” TV show.

I do have a couple of other notes about Harry that I want to be sure to share, including one tangential question.

First, from reader Jeff Pokopec, I had a short note, “Wasn’t Harry Allaman’s appliance store where the Lincoln Highway Garage was?” Jeff, that doesn’t match my records – Lincoln Highway Garage was in the 1200 block of East Market, and Allaman’s was back in the 700 block (736 E. Market, according to a 1975 ad found by my friend and frequent researcher and commenter Audrey Lerew).

Audrey’s brother worked for Harry Allaman, and she had previously found some information for me on Wilford “Bill” and Jeannette Warner, the couple owned Allaman’s Maytag from the 1970s to approximately 1995 or 1996. Wilford Franklin “Bill” Warner passed away in 1996, and his wife, Jeanette Louise (Minnich) Warner, died in 2000. (If you’re reading this in our print edition, if you visit this column online at www.yorkblog.com/onlyyork, I’ve linked to both of their obituaries on the Find a Grave website, which also shows their headstone in Susquehanna Memorial Gardens.)

I also had a note from reader Dave Toggas, who wrote, “Our Boy Scout troop did a canoe trip with Harry on the Conewago Creek to the Susquehanna. We were on his Sunday show. Our troop leader’s first name was Bud. Can’t remember his last name… hope you can help. It was in the late 1970s.

I would certainly be interested in whether anyone else remembers Bud’s name! I’m wondering if it might be Eugene “Bud” Rabenstine.

That Bud, also known as Shorty, died in 2012 and was heavily involved in Scouting in York County for many years. His obituary notes, “Active in Scouting for 70 years, he joined the Boy Scouts of America in 1932. He was Scoutmaster of Boy Scout Troop #18 for 27 years; a Vigil member of Tuckahoe Lodge #386, Order of the Arrow; a Lodge Advisor for 10 years; a recipient of the Silver Beaver Award, and the Wood Badge Beads; a Contingent Leader of the National Jamboree in Colorado Springs; a Contingent Leader to Philmont Scout Ranch in Raton, N.M.; a member of the National United Church of Christ Association of Scouters; and was awarded the God & Service recognition from the United Church of Christ and the Boy Scouts of America.”

Last summer, I received a note from Kelly Rexroth. Kelly wants to know if anyone has information on the former M&H Pure Foods Store. “I have an antique safe from there,” she wrote.

Many local groceries used to operate as “Pure Foods” – for instance, Weis Markets used to be Weis Pure Foods, and Saubel’s was a Community Pure Foods. I’m not familiar with M&H, though, so I’m looking forward to hearing more!