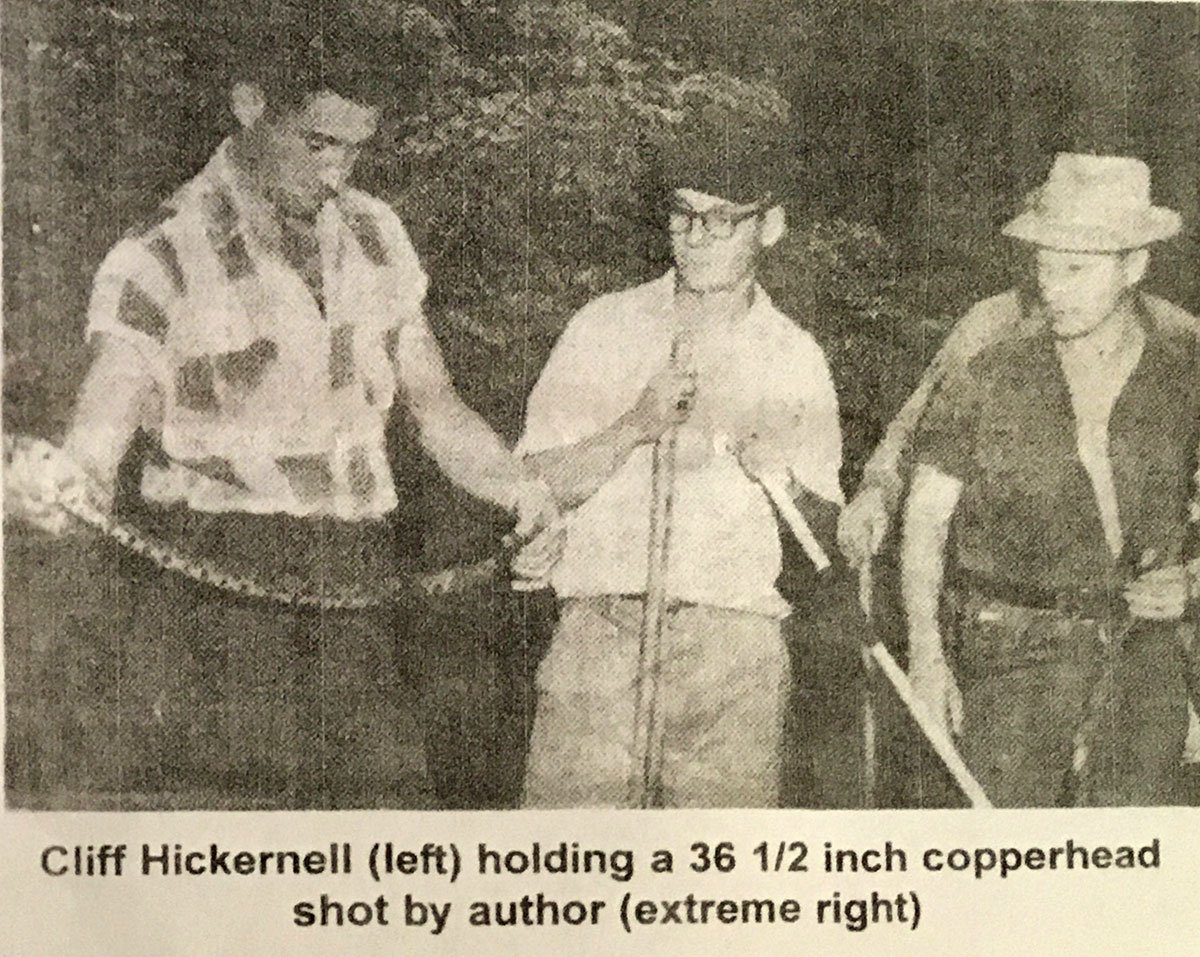 This photo of a 1961 copperhead hunt, sponsored by the York County Conservation Society, appears in Robert Breneman's memoirs. Harry Allaman, a Maytag dealer in York, hosted a TV program called "Call of the Outdoors" at the time and was filming the snake hunt for his show.
Posted by Joan ConcilioMay 25, 2020May 25, 2020 Local memoriesNo Comments

Today I’d like to share a letter and some little-known York history from reader Robert Breneman of East Manchester Township.

After reading a past column about Harry Allaman, York’s Maytag dealer, Robert wrote, “I’d like to add some of my contacts with Harry.” Robert told me that his autobiography, titled “A Victim of Circumstances: Memoirs of Robert Breneman,” which was released in July 2014, had a couple of stories in it about Harry, which he was kind enough to share and which I’ve included in today’s column.

Robert, who is 91 at the time of this writing, said he was born and raised in the 500 block of West College Avenue. His parents had a grocery store at 589 W. College Ave. (at West Street), H.F. Breneman. His grandfather was a York City councilman in charge of streets and highways, Frank H. Breneman.

(He notes that copies of the book are available, which had its second printing last fall, are available for $15; if you are interested, drop me a note using the contact information at the end of the column and I will put you in touch with Robert!)

Here are the stories, all excerpted from “A Victim of Circumstances.”

While working as a carpenter for my brother-in-law Paul, we were building a house in Strathcona Hills, on Strathcona Drive. I was working alone, trimming out the inside at a bathroom window facing the street. I noticed a car had stopped out front and I recognized the driver getting out as Harry, the Maytag dealer in York. I recognized him because he aired a local TV program on Sundays on Channel 8, called Call of the Outdoors.

As I watched him approach the house, I noticed his car was moving down the street. I shouted to Harry as I ran outside. Harry didn’t hear me and hand’t reacted as I rushed past him. As I ran alongside the car, which was picking up speed on the hill, I jerked open the door and leaped inside. I pushed on the brake, bringing it to a stop. I looked down the street and saw it made about a 90-degree bend to the right, and the car, had it continued, would have possibly wound up in the house on the bend.

As Harry retrieved his car, he thanked me, but he didn’t offer me a free Maytag washer or dryer. Oh well, I felt good that I was there to do my good deed for the day. Besides, it was getting boring working alone and I needed a little excitement.

On the rainy morning of Aug. 26, 1961, the first organized copperhead snake hunt in York County had been scheduled. We met at Keiser’s General Store at Muddy Creek Forks at 7 a.m. There were 224 registered hunters, including women, armed with various weapons.

The hunt was sponsored by the York County Conservation Society and many well-known celebrities were on hand. Included were H.L. “Bill” Consley, an internationally known York County big game hunter, who will only hunt with a camera today; Harry Allaman, who hosted a TV show named “Call of the Outdoors” on WGAL Channel 8, which aired every Sunday at noon; U.S. Congressman George Goodling, along with Dr. J.A. Hunt from Delta, who was on board in case someone was bitten or injured. Allaman was filming the hunt for his TV show and for the 2 local newspapers, The York Dispatch and The Gazette and Daily (presently known as the York Daily Record).

Most of the hunters were from Pennsylvania, but some came from as far away as New Jersey and Maryland. After receiving our instructions, we were split up into small groups and taken to different locations. I chose to go with a group going to Camp Donegal, a Presbyterian church camp near Sunnyburn, a small town along Route 74. There had been concerns about the large number of snakes near the children’s camp.

There were wet discarded boards strewn about, which some guys were turning over, but I found some sawdust piles that looked more promising. They would be dry, the rain was pouring at the time but wasn’t penetrating the piles. I was glad that I wore a broad-rimmed hat for the occasion. A few other guys had the same idea and joined me in digging.

Cliff Hickernell from Reinholds, a small town in northeastern Lancaster County, was digging next to me when I noticed he uncovered a squirming copperhead deep in the sawdust. As I watched, he uncovered it several times, but it kept going deeper in the pile. Most of the hunters carried garden hoes, but I chose a forked stick and an H & R .22-caliber revolver loaded with birdshot. I was concerned that he would lose it since one got away from him previously. I asked him if he wanted me to shoot it, and after silence and several more times of him digging it up, only to lose it again, I took matters into my own hands and shot it twice, allowing him to pull it out.

A Gazette photographer happened to be nearby and snapped a picture of Hickernell holding the snake along with another guy and myself, which was printed in the newspaper. Even though I killed the snake, I felt that because he found it first, it was only fair that he should get credit for it. It turned out to be the longest one found, 36 1/2 inches. It also had an oddity about it, it had a double forked fang on one side.

The Second Copperhead Snake Hunt of 1961

On Saturday, Sept. 2, 1961, was the second snake hunt that was sponsored by the York County Conservation Society that year. The previous Saturday, the first snake hunt was held, but due to the heavy rain, only 10 copperheads were taken. It proved so popular that many of the hunters wanted another crack at it.

We met again at 7 a.m. at Keiser’s General Store at Muddy Creek Forks for instructions, and then were split up into small groups to hunt at various places. The previous week, I hunted at a sawmill near a Presbyterian church camp called Camp Donegal. This week however, I was undecided where to go when Harry Allaman said he’d like a group to go with him, so I volunteered along with some other people.

He took us in his vehicle to a stone foundation where a barn once stood. Everyone found a place and started to hunt. I pulled some stones off the foundation with the hoe I carried along. I didn’t use my forked stick like last week. I had only removed a few stones when I uncovered a nest of small black snakes with an orange ring around their necks. Allaman, who was setting up his movie camera on a tripod nearby, noticed and yelled, asking me to try to cover them up again and hold them there. He explained that he wasn’t set up yet. After awhile he gave me the OK, and I again uncovered the snakes. He yelled again tha the forgot to put film in the camera and asked if I could again cover them up, which I succeeded in doing. When I was certain he was ready this time, I uncovered them again, trying to look surprised like this was the first time.

After informing me that his filming was successful, I put the snakes in the bag I was carrying. I had never seen this kind of snake and Harry informed me that they are ring snakes and are fairly uncommon. Harry then told me that my catch would be shown on his TV program in 2 or 3 weeks, Call of the Outdoors on WGAL Channel 8.

You can bet that I tuned in every Sunday, but it hadn’t aired yet. There came a Sunday where I had an errand to run and I thought that I could do it and be back in time and still not miss the show. As I hurried back and came in the door, you guessed it, my wife said that I was just on the program briefly, and I had just missed it. Last week, I had shot the largest copperhead, 36 1/2 inches, for which another guy got the credit and was awarded Champion for 1961, and now this. So much for my brief claim to fame, but oh well, there’s always next year.