Mail call: Memories of the Dallastown area from the 1920s to present

Today’s reader letter comes from Wade Kehr of York Township, who was kind enough to share his memories of the Dallastown area and his compliments to all those who have previously shared memories from around the county. 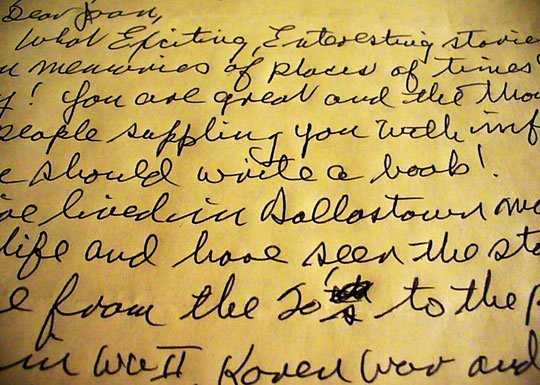 He writes, “What exciting, interesting stories on memories of places and times gone by! You are great and the thousands of people supplying you with info prove you should write a book!” (No, I didn’t pay him to say that, but I really do appreciate it.) Who knows; maybe someday, the stores and restaurants of the past will get turned into a book. You never know.

But Wade continues, “I’ve lived in Dallastown most of my life and have seen the stages of change from the 20s to the present. I was in WWII, Korean War and retired from USAF. I came from a wonderful poor family of ten. Had to wear older brother’s clothes, worn out sneakers with cardboard in the soles – OK unless it rained. I always had 3 to 4 jobs, 3 paper routes, mowed grass … sold door to door. Some of my happiest rememberings were 1937 to 1941 era! Girls, my first car, jukeboxes, soda and food fountains, girls, zoot suit dancing, walking to the movie theatre in Red Lion, girls, enough money to buy one ice cream soda with 4 straws…” (I’m sensing a theme here, Wade, I hope you don’t mind me saying!)

He adds, “The exciting times were at ‘The Coffee Shop,’ 21 E. Main St., Dallastown. Soda fountain with hot and cold sandwiches, booths with jukebox and pinball machines. Plus, lots of girls from York, Red Lion and Yoe and of course D’town. Dancing in wood paneled basement to its juke. Yeager Myers owned it and also the Atlantic Service Station on W. Main St., where we could wash our car and paint our white-wall tires for Saturday nite!”

“Then there was ‘The Lamp Post,’ on first block of W. Broadway. Also Richard’s on the square of Red Lion, with food, soda and girls!! Also Sitler’s general store of East Prospect town center. Again a juke, tables at the rear and the most beautiful girls in the county! Windsor also had Hivner’s Confectionary with the usual, across from the old fire station on Main St.” He continues by saying we’ve already mentioned many other places he remembers, so he won’t repeat those.

But he does add, “In the late 50s at 19-21 North Walnut St., Dallastown, was ‘Park Hill Canteen,’ a happy place for the teens, a pool table, pinball machines, jukebox, booths and dancing… Elvis, those 4 new guys from England, and even Eddie Fisher were popular. Dallastown also had the FIRST Super Service Station at Waltermyer’s Garage, 464 E. Main St. There was also a skating rink and restaurant in the same building.”

He concludes his letter with “best wishes” to others who share his love of memories. Wade, thank you so much for sharing all these! We’ll definitely add them to our directory and appreciate you sharing with us!

1 comment on “Mail call: Memories of the Dallastown area from the 1920s to present”