Posted by Joan ConcilioAugust 26, 2011 It used to be..., York City/SuburbanNo Comments

A blast from the past: Flinchbaugh Wagon Unloaders ad 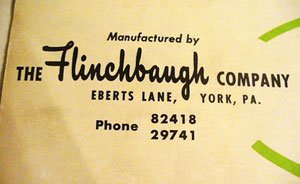 One great thing about having a husband who is a noted ephemera blogger with a huge collection of stuff that he’ll never have time to blog?

Well, of course it’s that he gives me anything York-centric that he comes upon, because he knows I’ll be able to use it on my blog!

Today’s random old piece of paper is a large trifold brochure for Flinchbaugh Wagon Unloaders, manufactured by The Flinchbaugh Company, Eberts Lane, York. I have no idea on the date, except that it was probably in the 1950s, because the phone numbers were in the five-digit style – “82418” and “29741.” (And because there were, apparently, a lot of people who had to wagons full of stuff to unload…)

Anyway, the funniest thing is that, after looking through the whole brochure, I’m not sure exactly what types of wagons these devices unloaded. My best guess is a farm wagon full of hay/straw, but that’s just a guess. Take a look for yourself and tell me if you think I’m off base! 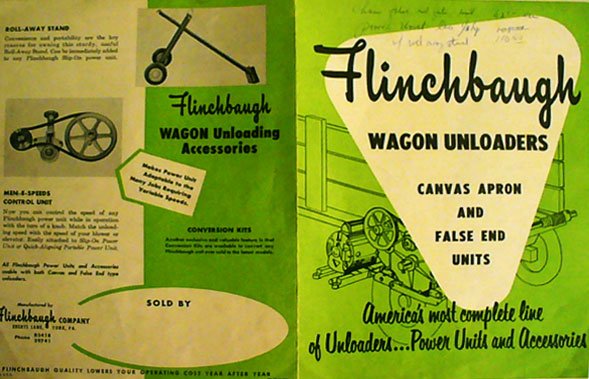 If you’re curious, it seems like the company is still in business; it’s now Flinchbaugh-Kurtz Company, based in Manchester, and describes its vision to be “the premier machine shop in South Central Pennsylvania.” Its website says it was founded in 1936 in York, so I’m pretty sure it’s the same place. Anyone have any further details?