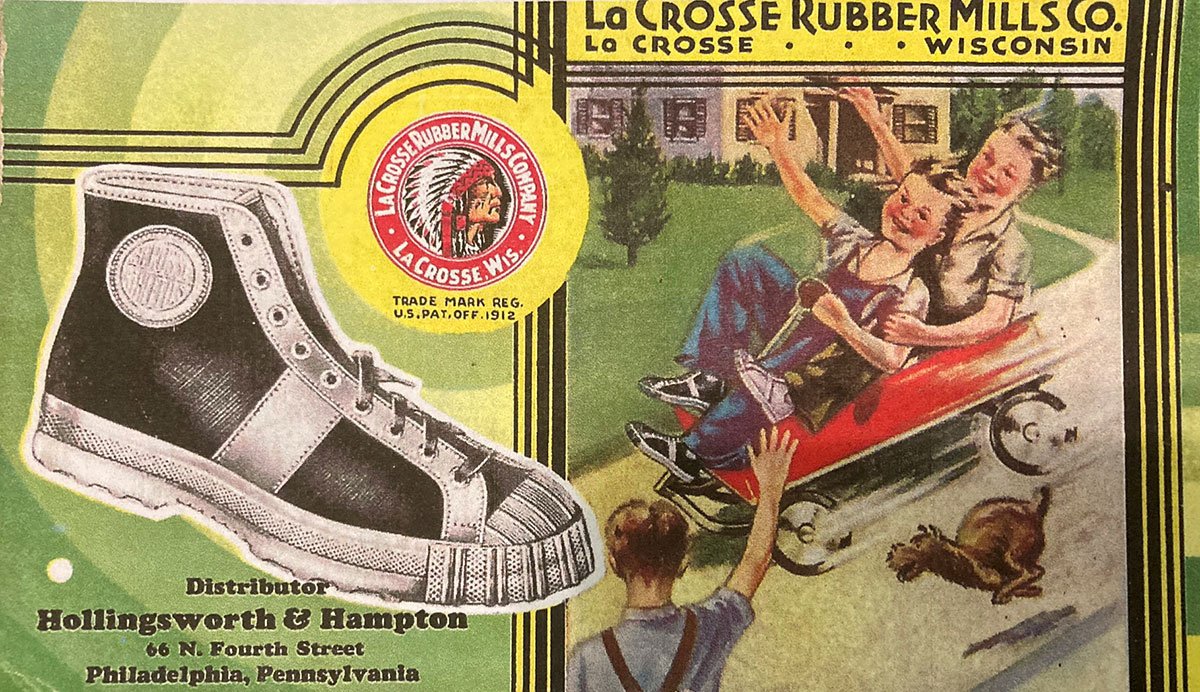 A reader who only signed their name as "M.H." shared this image of a LaCrosse ink blotter (distributed by Hollingsworth & Hampton, 66 N. Fourth St., Philadelphia), as well as some more York-specific ephemera!
Posted by Joan ConcilioNovember 27, 2020November 28, 2020 Local memories, York City/SuburbanNo Comments

It might sound strange, but I sincerely hope everyone reading this had the oddest Thanksgiving ever. Because if you did, that means you stayed home and stayed safe, and I am all for that! I am guessing we will all have some strange winter holidays coming up, too. Hopefully some York County memories of different times will help.

Earlier this year, I wrote about finding a gift certificate to the former Darleen Myers Beauty Shop in a “free” box on one of my many quarantine walks around my neighborhood.

Following that, I heard from longtime reader Wayne E. Breighner.

Wayne wrote, “I enjoyed your article on Darleen Myers Beauty Shop. I had the privilege to chauffer clientele to this beauty shop for some years on a weekly basis. I also was the receiver of their services – e.g. haircuts – from time to time.

“The greatest difference from a male-dominated shop was that at Darleen’s shop I never had a stylist chomp on a cigar while cutting my hair! Also the perfume used by Darleen’s stylists did not come from a bottle that had a skull and crossbones warning!

“I never received a procedure called a ‘set’ so I will not comment on that! However at men’s barber shops I did need to compensate the barber for a hunting permit as my crop was very depleted! So I need a HARE ‘rabbit’ permit in season.

“At Darleen’s while waiting on my rider’s wash and set, I could catch up on social goassip. My rider was also my wife (that’s how I got this job). She had a weekly scheduled appointment.

“In conclusion of this tale, I must add the fact Darleen was a classmate of mine at ‘Ole Fish High’ on West King Street, also known as York Catholic High School, and my wife and Darleen and her husband have been friends for a long time, along with great memories! Guys, take your wife to Darleen’s and enjoy the memories!”

I also heard from Randy Lehr, who is the current owner of the hair salon in that location! Randy wrote, “It was so cool to here about your article from some of my clients. Darleen is still around, retired of course. We were both thrilled to see this.”

Also from Monica (Horn) Clabaugh, I heard, “Oh My! My mother came to this country in 1961 and moved to York in 1962. We were a family of five on a tight budget. The local beauty schools offered haircuts at a discount, so that is where my mom went. Darleen taught at either Vo-Tech, Empire Beauty School and there was another one too (Peg Horn Beauty School, I think). When Darleen opened her salon, my mom followed her. She cut my hair too. She always had Tootsie Pops for the kids and one of those 10-cent soda machines where you have to pull the glass bottle really hard to get it out of the slot. She even had a stylist who was a dead ringer for Farrah Fawcett. (I think she won a contest for her look). Her husband, Dale, was a witness on my mother’s naturalization application. I can still hear her distinctive voice. She has a daughter names Darla Jo… I am so happy to have found your article, and on Mother’s Day. It reminded me of my mom who passed away 25 years ago.”

Then, from Carol Stauffer, came this note: “I am writing to you in response to your inquiry about Darleen Myers Beauty Shop. I would like to start in the beginning of my friendship with Darleen. When I was a child growing up on South Hartley Street in York, Darleen lived with her parents on West College Avenue. Her parents set up a stand in front of their house and sold snowballs for 5 cents or 10 cents if you wanted a topping on it like marshmallow. I have to admit I really don’t remember Darleen selling the snowballs. Even though she was older than me it might have been her dad that ‘worked’ the stand. Her mother had a beauty shop in the front room of her house and her dad had his own shop to repair and wash Venetian blinds. Later, after she became a beautician, she worked for Alcorn’s Beauty Shop in West York where my grandmother went. She would cut my hair when I accompanied my grandma to Alcorn’s. She then became an instructor at Empire Beauty School so I followed her there to have my hair done. Of course when she opened her own place on East Market Street, I went there too. I might add that when Darla, Darleen and Dale’s daughter, was born I was her babysitter. They were fun times and good memories.”

And finally, I heard from longtime reader Norma Jean Scott-Mitzel, who also remembered those beauty school days! She wrote, “Darleen Myers was my beautician school teacher in 1957 at the Ken Delle Beauty School on North George Street In York. She was an interesting and fun teacher. About September 2019, her 1959 wedding photo was in the Sunday paper. She and Dale Myers were married 60 years. I believe the gift certificate was written by her.”

Thank you all for those memories – it was so fun to hear them!

A reader who only signed their letter M.H. mailed me reprints of three neat pieces of ephemera:

They were all neat, but I was especially thrilled to see the details in that Victory Rally program, an interfaith event sponsored by the “Local Round Table of the National Conference of Christians and Jews” and featuring local musicians as well as members of both the Jewish and Christian faith community.

Reader Charles Strine recently found an older column online in which I talked about some of the history of phone service in York County. He then wrote to ask, “When did York, Pa., phones get changed from pulse to tone?”

My recollection is that this was phased – we had pulse when I was growing up in the early ’80s in northern Dover Township, but most people I knew had touch-tone by that time. (I, of course, was just mad that I couldn’t call in to the TV show where you could win a trip to Space Camp, which required a touch-tone phone.)

But I’m not sure when we fully switched over, or even if I’m remembering that correctly, so I’d love to know more!