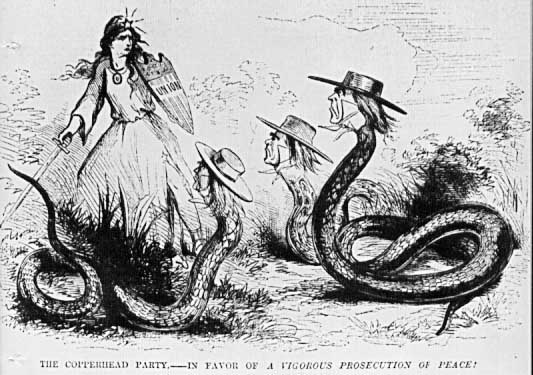 This satirical cartoon from Harper’s Weekly depicts members of the pro-peace wing of the Democratic Party as copperhead snakes, a characterization made popular in the Republican press. The artist suggests that the “Copperheads” as being a threat to the safety and welfare of the Union. The Democratic Party during the war fractured into Peace and War wings, opening the opportunity for pro-Lincoln or pro-Union candidates to win their races in many traditional Democrat regions.

The Copperhead movement was perhaps strongest in Pennsylvania in the border counties, where trade with the South had been important for generations and the farming culture fostered Democratic beliefs. No numbers exist for the strength of the Copperheads in York County, although the Democratic Party was the dominant political entity in the area. Republicans often accused any Democrat of being a Copperhead, whether they were truly a member of the Peace wing or not. Most, it appears, did not in reality openly support an end to the war not did they openly protest Lincoln’s policies. They may have voted for the Democratic candidates, but many of these residents otherwise did not get involved in social or political issues, preferring to be left alone.

However, in a few publicized cases, the more vocal “Copperheads” found themselves clearly at odds with the more fervent Lincoln supporters. There are occasional accounts in the local newspapers of arguments and clashes. Both sides accused each other of being in the wrong.

One interesting case near the end of the war in early 1865 epitomized the friction between neighbors. When a young  resident of southern York County’s Stewartstown region heard the news of Lincoln’s assassination, he proclaimed that it served Lincoln right and he “should have been shot long ago.”

That emotional exclamation by youthful John S. Gemmill drew an angry response from other young locals, who assaulted him and pummeled him with rotten eggs. Gemmill, in turn, faced potential Federal charges of disloyalty for his ill-timed wisecrack.

John Smith Gemmill was a 20-year-old farmer living off of Barrens Road southeast of Stewartstown near the Maryland border. He was born on that farm (his father’s) on December 13, 1844, the fourth of seven children born to Robert Beniak Gemmill (1807-1878) and his wife Elizabeth (Dorris) (1805-1876).

In the spring of 1865, emotions in York County ran high following the assassination of the President. According to the sister of Union soldier John Harvey Anderson, Gemmill remarked, “It served Lincoln right. He should have been shot long ago.” For that passionate statement, he drew the fire of some boys in Stewartstown armed with rotten eggs. Their ammunition found its mark. “He was well spattered with the juices of the eggs,” she claimed.  “The aim of young America on that occasion was straight and true. One of the foul eggs struck him in the mouth, and he beat a hasty retreat.”

On September 10, 1865, the assistant adjutant general of the military District of Pennsylvania, John S. Schultze, sent a three-page letter to Major General Andrew A. Humphreys outlining the case against Gemmill. General Humphreys two years earlier had played a prominent role in the Battle of Gettysburg while leading a division of the Third Corps.

Another York Countian, William Griffiths, had written a letter to the government back on August 21 charging John Gemmill with disloyalty. Schultze had looked into the matter and now offered his observations to his superior officer.

Gemmill’s seemingly harsh words against the late president, uttered in haste in the wake of the president’s assassination back in April, had led to unfortunate and painful consequences. A party of young men, including accuser William Griffiths’ son, had “severely punished” Gemmill (Schultze did not mention that the weapon of choice was rotten eggs). In turn, the assailants were brought before a local judge and formally charged with assault and battery. They were forwarded to the Criminal Court in downtown York for trial, where they were found guilty and fined one dollar each plus court costs. This was the lightest possible punishment they could have received, and none of the assailants faced jail time.

Schultze investigated and found that other than the affidavits submitted with Griffiths’ letter, little additional information could be found to justify bringing formal charges for disloyalty against Gemmill.

However, to Schultze’s satisfaction, “The action taken by Mr. Griffiths in this matter has had a very good effect in those opposed to the present administration in that region. The Gemmill family, which is extensive, and has considerable influence, are aware that they have been charged with uttering expressions of disrespect against the late Chief Magistrate of this Nation and embracing feelings of hostility to the Government, and in that connection their names appear in the records of York County, Pa., in the Middle Military Department and District of Pennsylvania.”

John Gemmill would remain a free man, but he and some of his extended family members would remain at odds with Griffiths and the loyalists of Stewartstown for quite some time. Interestingly, other members of the broad Gemmill family, including Even Griffith Gemmill of the 209th Pennsylvania Infantry, served in the Union army. One of John’s brothers, Dr. Robert B. Gemmill, Jr., tended to the wounded after the battle of Gettysburg (his detailed account appears in our book Echoing Still: More Civil War Voices from York County, Pa.). 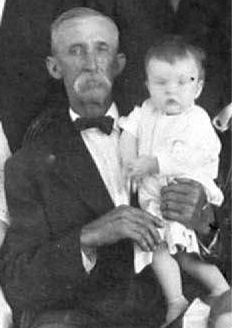 An elderly John S. Gemmill is shown with one of his many descendants in this vintage photo from 1913 which was uploaded by Charles R. Wert to Wikitree (http://www.wikitree.com/wiki/Gemmill-37).

Here is a brief biography of Gemmill taken from Gibson’s History of York County, Illustrated…

"John S. Gemmill, son of Robert and Elizabeth (Dorris) Gemmill, of York County, Penn., was born, December 13, 1844, on the farm where he now resides. His grandfather came from Scotland and settled on a farm of 135 acres, near New Park, Penn. The father of John S. was born of John S. was born in 1807, was brought up on a farm, and finally moved to a farm of 145 acres, which is now owned by his son, and where he died in 1878. John S. was reared on a farm and has followed farming since. He was married, in 1872, to Rachel B. Robinson, of Harford County, Md. They have eight children: Nettie B., Mary E., William James, Charles C., Edith P., Edna L., Robert B. and Joseph S. Mr. And Mrs. Gemmill are members of the Presbyterian Church of Centre. Robert Gemmill, subject’s father, was at one time commissioner of York County, Penn., for three years, and has also held several minor township offices."

AAG John Schultze’s account has been adapted from the military records of the District of Pennsylvania, Vol. 1.