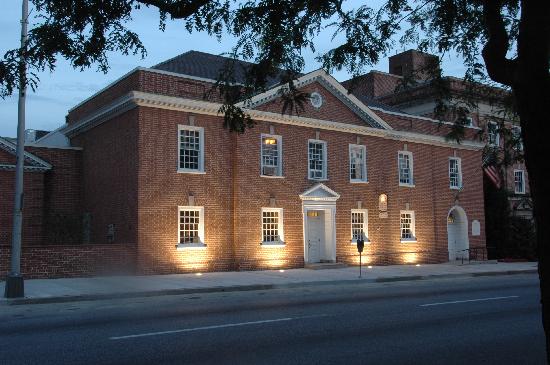 The York Civil War Round Table is a non-profit organization that seeks to promote, interpret, preserve, and protect the Civil War heritage of York County, Pennsylvania, through the education and exchange of information with its members and the general public.

Membership is free and open to anyone interested in learning more about the American Civil War.

Founded as the White Rose Civil War Round Table, the York CWRT holds monthly meetings the third Wednesday of every month except December at 7 p.m. in the auditorium of the York County Heritage Center at 250 E. Market St. (the historic Lincoln Highway) in York, Pennsylvania. Each meeting features a guest speaker talking about a Civil War topic of local or national interest. There is no admission fee or membership requirement to attend any of these meetings.

Other scheduled events include an annual clean-up day at Gettysburg National Military Park as part of the “Adopt-a-Position” program. Members and guests tidy up the area around the 102nd Pennsylvania/62nd New York on the John Weikert/Althoff Farm Lane. A free battlewalk with local experts is usually included to round out the day. Other regularly scheduled battlewalks by Dr. Charlie Fennell occur in the autumn.

Here is the current schedule; as mentioned the public is welcome and there is no charge!

January 16, 2019 – Randy Drais – “William H. Tipton: The Man Behind the Camera, How He Influenced the Gettysburg Battlefield”

July 17, 2019 – Ronald D. Kirkwood – “Too Much for Human Endurance: The George Spangler Farm Hospitals and the Battle of Gettysburg”

August 21, 2019 – Richard Lewis – “Cloaked in Mystery: The Curious Case of the Confederate Coat”

November 20, 2019 – James A. Hessler – “Gettysburg’s Peach Orchard: Longstreet, Sickles, and the Bloody Fight for the ‘Commanding Ground’ Along the Emmitsburg Road”

January 17, 2018 – Gene Barr – “A Civil War Captain and His Lady: Love, Courtship and Combat from Fort Donelson through the Vicksburg Campaign”

July 18, 2018 – Dr. Jennifer M. Murray – “On A Great Battlefield: The History of Gettysburg National Military Park, 1863 – 2016” – NOTE: Jen had to cancel because of moving out of the area to take a new position. Joe Mieczkowski’s talk on the draft riots will replace her planned talk.

February 15, 2017 – James McClure and Scott L. Mingus Sr. –“The Ground Swallowed Them Up: Slavery and the Underground Railroad in York County, Pa.”

April 19, 2017 – Mark Grim – “Imprisonment, Trial and Execution of the Lincoln Conspirators – An Overview”

April 20, 2016 – Thomas A. Bogar – “Backstage at the Lincoln Assassination: The Untold Story of the Actors and Stagehands at Ford’s Theatre”

May 18, 2016 – Wayne E. Motts & James A. Hessler- “Pickett’s Charge at Gettysburg: A Guide to the Most Famous Attack in American History”

May 20, 2015 – Michael Sipes – as Lt. Gen. Jubal A. Early, C.S.A. – The Army of Northern Virginia’s 1863 Campaign North into Pennsylvania: Viewpoints on the Movements of the Second Corps

January 15, 2014 – Eric Lindblade – The Battle was Grand, Sublime, and Awful: The 26th North Carolina and the Battle of Gettysburg

April 16, 2014 – Mike Plunkett – Paddy Has Gone For A Soldier: Songs and Stories of the Soldiers of the Irish Brigade

April 17, 2013 – Dr. Charles Teague – From Calamity to Crisis: Oliver O. Howard, Out of Chancellorsville and into Gettysburg

February 15, 2012 – Debra McCauslin – Echoes from the Past: African-American Voices at Gettysburg

November 14, 2012 – Dr. Mark A. Snell – General William B. Franklin and the Battle of Fredericksburg

May 18, 2011 – Joseph Stahl – Identification Discs of Union Soldiers in the Civil War at Gettysburg

May 19, 2010 – Matt Atkinson – Storming Through Mississippi: The Campaign and Seizure of Vicksburg