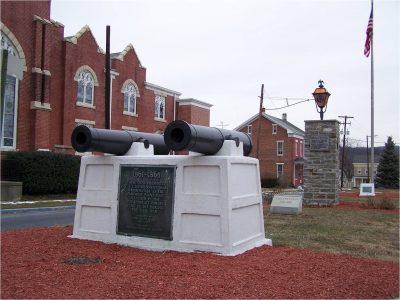 Wrightsville, Pennsylvania, will always hold a special place in my heart. During the Civil War, Union troops ordered four civilians to burn the world’s longest covered bridge between Wrightsville and Columbia to prevent Confederate passage over the Susquehanna River. After we moved to Pennsylvania in 2001, our oldest son wrote a paper on the burning of the bridge as part of his master’s program in history at Millersville University. That work inspired me to write a detailed book on the defense of the river crossing. Flames Beyond Gettysburg is now in its third printing and remains the best-selling of my 22 books to date. It was the book that launched my side career as a writer and Civil War lecturer.

Many residents of Wrightsville throughout the past two centuries, up to the present day, have been interested in the story of the bridge-burning. A small diorama of the town and its defenses remains a popular attraction. RiverFest commemorates the burning each summer with a program, musical concert, and ceremonial lighting of wood in braziers on the piers of the old bridge. Historic Wrightsville Inc. operates a museum on Locust Street that has a display case with items associated with the bridge. Local schoolteacher Glen Banner wrote an interesting historical fiction for teenagers (Flames Across the Susquehanna). A popular watering hole is called the Burning Bridge Tavern.

A stone monument at Hellam Street and 4th Street recalls Wrightsville as the “farthest east” the Army of Northern Virginia came during the Gettysburg Campaign. Brigadier General John B. Gordon was the only Confederate general to water his horse in the Susquehanna.

In mid-December 1917, the governor of Pennsylvania presided over a ceremony to dedicate four Civil War-era cannon in Wrightsville. The event was deemed so important that all factories and businesses closed for the afternoon.

Here is the story from the December 13, 1917, issue of the Harrisburg Telegraph.

Four Cannon to be Dedicated

“Governor Martin G. Brumbaugh will be [the] speaker here to-morrow at the dedication of the four cannon donated to the borough of Wrightsville by the United States government, which have been mounted at Fourth and Hellam streets, to mark the farthest east reached by the Confederate soldiers on June 28, 1863.

“At the same ceremony also a service flag will be unfurled by the school children with sixty-seven stars, emblematic of the young men who are now serving in the various branches of the Army and Navy of the United States. In addition to the above number, a Wrightsville boy, Shermon Daron, is now recovering from wounds received in France, while fighting with the Canadian forces in the trenches.

“All of the factories will be closed throughout the afternoon and the stores will suspend business during the ceremonies. The Governor, accompanied by Mrs. Brumbaugh, will arrive in the borough at 12 o’clock, and with Banking Commissioner D. F. Lafean, of York, will be entertained at luncheon by Chief Burgess and Mrs. R. P. Wilton. The dedicatory exercises are to commence at 1 o’clock. A. J. Warfield, chairman of the reception committee, will preside and introduce the Governor to the assemblage.” 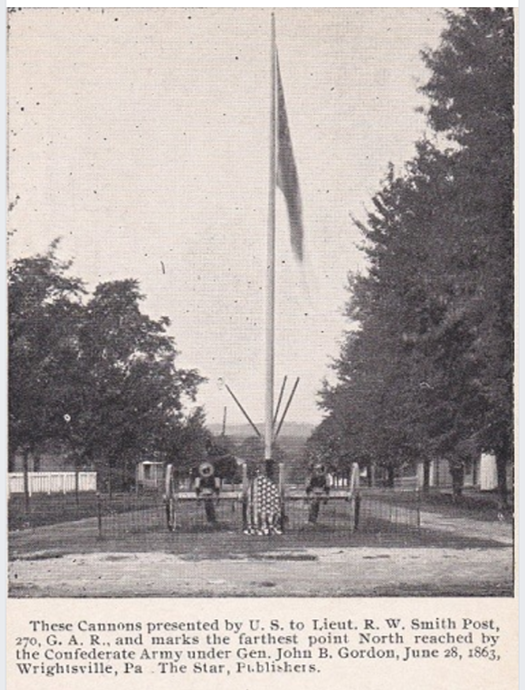