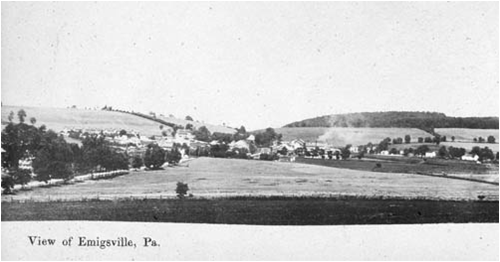 This image from the Manchester Township Historical Society shows Emigsville, Pennsylvania, a small village during the Civil War years nestled along the Harrisburg Road (now N. George Street) and the Northern Central Railway. Prosperous farms surrounded the town, which featured the large home, farm, and general store of the John Emig, Jr. family. The town was named in 1840 for him.

On Sunday, June 28, 1863, curious townspeople watched as Maj. Gen. Jubal A. Early led several thousand Confederate soldiers southward through Emigsville as they headed to York. Later that day, Col. William Henderson French’s 17th Virginia Cavalry regiment camped on the open hill shown in the above photo immediately northwest of Emigsville (this hill is now partially wooded and covered with townhouses). The Rebel soldiers departed on June 30 and many of them subsequently fought at the Battle of Gettysburg.

A handful of primary accounts recall the march of Early’s infantry and trains of artillery and supply wagons through Emigsville. Among these are the recollections of Flora (Emig) Dice who was a little girl at the time the Tigers paid a visit to her father’s sprawling mansion and nearby store.

Late in her life, Flora (who passed away in 1954 at the age of 98) penned her reminiscences in August 1944 (during WWII) of the Confederate invasion. Here are some highlights of that account, a copy of which was graciously given to me by the current owner of the Emig Mansion. 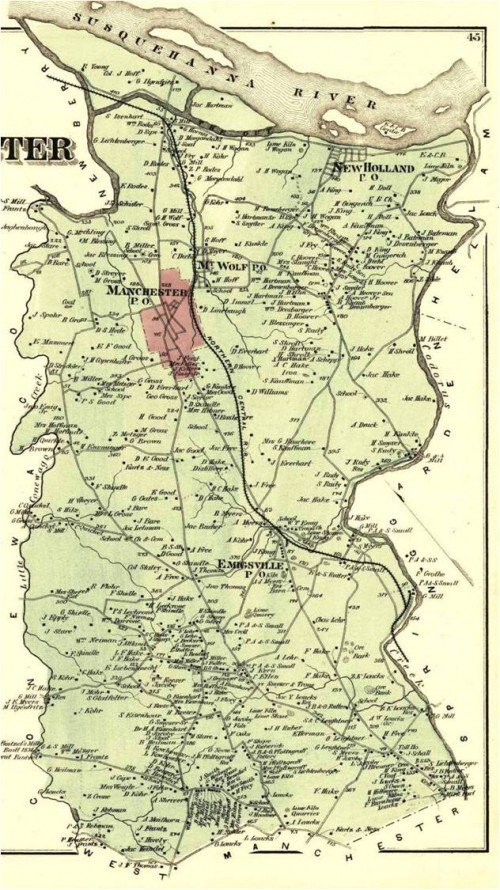 1860 map of Manchester Township, York County, Pennsylvania. Emigsville is in the right center along the main highway from York up to Harrisburg.

The Emigs owned a large farm of 191 acres which had been purchased in 1802 by an ancestor Valentine Emig. By the time  of the Civil War, John Emig, Jr. also owned the town’s general store and other nearby buildings. He and his wife raised 11 children, including 7 daughters. Flora was the ninth child in the family. In addition, three elderly people lived with the Emigs, as did a neighbor woman whose husband was off fighting in the Union Army.  It made for quite a household! 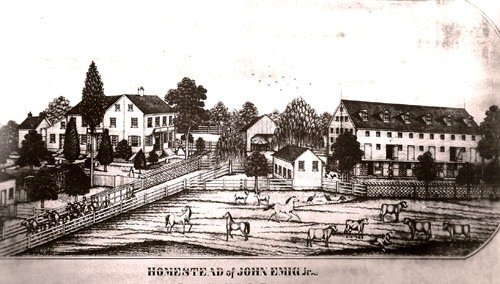 As Jubal Early’s men marched through Emigsville on Sunday morning, June 28, 1863, a regiment of the Louisiana Tigers (the 1st Louisiana Brigade under Brig. Gen. Harry T. Hays) stopped in front of the Emig house. Flora and her sisters, as well as the Union soldier’s wife who was staying with them, fed the Confederates bread and milk and other victuals until they ran short. That evening, a few officers came back for a home-cooked supper.

Because it was Sunday, John Emig’s store and post office was closed in accordance with the custom of the day and his strong Christian beliefs. However, the Confederates forced him to open the store. They paid him with Confederate money, insisting that he would later need it. That night, after Emig had relocked his store few Rebels broke into it and helped themselves. 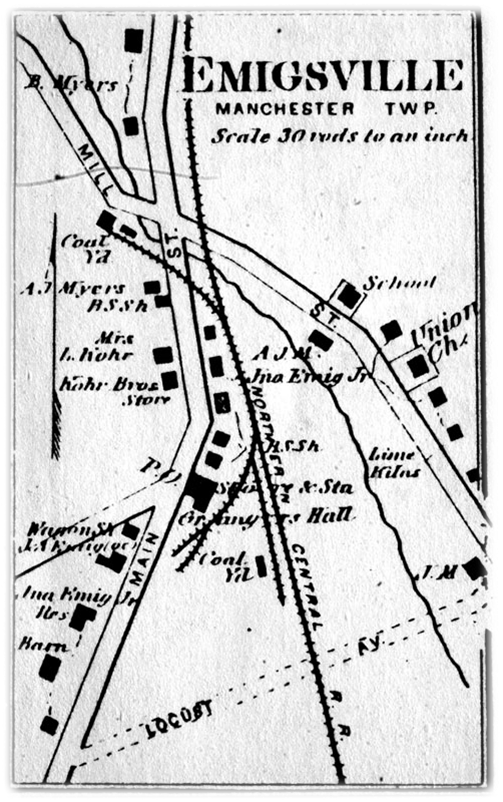 John Emig, Jr.’s residence and barn are delineated in the lower left of this old map of Emigsville. The Pennsylvania German-style bank barn is long gone, but the mansion has been restored and periodically used as a bed & breakfast. Also note Emig’s store and warehouse near the school, Union Church, and lime kilns. Some of the buildings shown on this old map still stand.

Emig was also a freight agent for the Northern Central Railway and had a rail spur next to his warehouse. On the siding was a railcar loaded with flour awaiting shipment to Baltimore, Maryland, to a commission merchant. The Tigers assumed the flour was bound for the Union army and prepared to burn the car. An alarmed Emig quickly produced the bill of lading, and the Rebels ceased their efforts and returned the car to the siding.

On Monday a detail of Louisiana Tigers guarded each door of the Emig home to prevent looting. They made Emig and his clerk go to the warehouse and fill their canteens with whiskey. The booze belonged to a local distiller and was also awaiting to be shipped.

According to Flora, her father had hidden some pieces of meat in the cupboard of his threshing machine. The Rebels discovered another cache of meat stashed in the granary and helped themselves. An officer asked Emig if that was all the meat he had. Emig replied, “You see what is here.”  The officer, suddenly sympathetic, turned to his men and said, “Boys, this man has a big family, throw some of the meat back.” However, that night (June 29) when the officer was not looking some of the Tigers returned and stole Emig’s chickens.

On the following morning word reached the guard detail to rejoin their regiment and prepare to march. A courier had ridden into York from the main Confederate force in Carlisle with orders for Jubal Early to march westward toward Heidlersburg and Cashtown as Robert E. Lee recalled his scattered army in order to prepare to engage the oncoming Union army. Shortly after sunrise, the remaining Tigers marched out of Emigsville, as did the 17th Virginia Cavalry. They had not idea they would fight the Yankees at Gettysburg for the next three days. 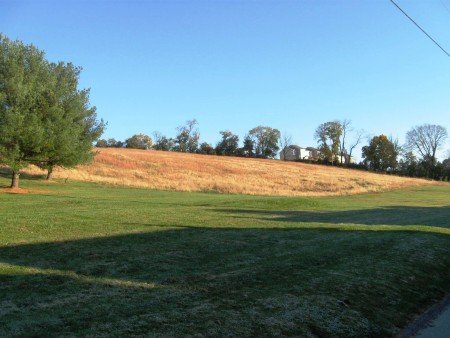 Modern view of the broad hill near the Emig Mansion which in 1863 was the campsite of the 17th Virginia Cavalry for two nights.

Young Flora and her family members could distinctly hear the boom of the artillery during the fierce battle off to the west. Emig’s warehouse clerk, apparently inquisitive, followed the sound of the guns and arrived at Gettysburg during the fighting. He watched a part of the battle from the relative safety and comfort of a cherry tree.

Flora kept one of the $5 bills the Tigers had paid her father. When she was an adult and had children of her own, she mounted the old bill on a serving tray and gave it as a gift to one of her daughters.

The Emig home passed out of the family in the 1940s. Recent owners have restored and maintained the impressive mansion at 3342 N. George Street. The Emig Mansion is listed on Wikipedia (click here). It was added to the National Register of Historic Places in 1984. A new owner purchased the property from Shary Smith and Wade Lady, the long-time owners of the bed & breakfast earlier this year. He and I have exchanged notes on the Louisiana Tigers and their shenanigans in York County (some of which I cover in my book The Louisiana Tigers in the Gettysburg Campaign). It’s just been reprinted by LSU Press as a paperback for the first time! 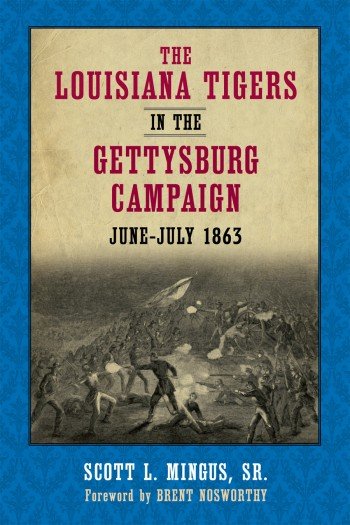 For more Cannonball posts on Emigsville and its Civil War history, click on the following links: