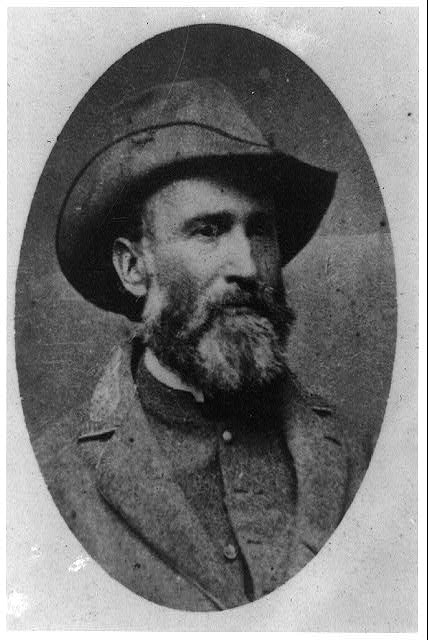 Every now and then, I receive questions after my many PowerPoint presentations and lectures on various aspects of York County, Pennsylvania, during the Civil War years. At times, folks also pose questions via email or on Facebook. Many of these inquiries are about local events in the Gettysburg Campaign. Occasionally, people ask me to clarify longstanding misconceptions about local history.

Here are a few of these questions, with my answers. Feel free to chime in with your own thoughts or questions!

1. I thought all the Confederate cavalry that rode into York County were under the command of Jeb Stuart?  Actually, there were three distinct groups of cavalry that entered York County during the last week of June 1863. Major General Jubal Early commanded the 17th Virginia Cavalry (Col. William H. French) and 35th Battalion, Virginia Cavalry (Lt. Col. Elijah V. White). They screened the advance of his infantry division and artillery battalion as it marched through York County on June 27-30, 1863. White’s men and one company of the 17th VA Cavalry rode to the Susquehanna River with Brig.Gen. John Gordon’s Georgia brigade. The second distinct unit not under Stuart’s command was a battalion of the 16th Virginia Cavalry under Maj. James Nounnan. His brigade commander, Gen. A. G. Jenkins, had sent Nounnan south from Cumberland County through Dillsburg to Dover on June 27th and 28th to scout northern York County, watch for any Yankees, and to take horses. The final group of cavalry (and by far the largest) were the 4,500 men in the three brigades under the direct command of Jeb Stuart. Operating independently from Early or Jenkins, Stuart’s column entered southwestern York County on June 30, fought at Hanover, and then camped at Dover. On July 1, they rode to Dillsburg and some headed on to Carlisle.

2. I had heard that Robert E. Lee came to York County? As far as is known, Lee never set foot in York County during his life. During the Gettysburg Campaign, the closest General Lee came to York was when he attended a meeting of his senior leaders on the evening of July 1 at a house on the northeastern outskirts of Gettysburg along the Harrisburg Road. “Marse Robert” is not known to have visited this area before or after the war, to my knowledge.

3. There is a place along Conewago Creek named for George Pickett, whose men camped there. No. George Pickett, like Lee, never came to York County during the Gettysburg Campaign. The farthest east he came was likely the Codori Farm along the Emmitsburg Road at Gettysburg during Pickett’s Charge.

4. Local Militiamen burned the Columbia-Wrightsville Bridge before retreating to Columbia. Technically, the orders to burn the world’s longest covered bridge came from Maj. Gen. Darius N. Couch, a Regular Army officer commanding the Union Army’s Department of the Susquehanna from his office in Harrisburg. Couch had assigned Maj. Granville O. Haller, a York native who was an officer in the 7th United States Infantry of the Regular Army, to lead the defenses of Adams and York Counties. As such, Haller had overall command of the defensive force at Wrightsville, which included the state’s 27th Pennsylvania Volunteer Militia and elements of the 20th and 26th PVM, as well as two local non-uniformed militia/home guard units (Stickler’s Cavalry and Case’s Company of black volunteers), a home guard company from Adams County under Capt. Robert Bell and the First Troop of Philadelphia City Cavalry. Haller’s men rolled barrels of coal onto the bridge. When the Rebels approached, one of Haller’s subordinates ordered four civilians to actually set the bridge on fire (that little act gave the Federal government an excuse to not pay damages).

5. A defender of Wrightsville was the first black soldier in a Federal uniform killed in the Gettysburg Campaign. A black man from Case’s Company reportedly was killed when an artillery shell fragment struck him in his head. His identity is not known. Technically, the deceased was not a soldier or a militiaman. He was a member of the non-uniformed company of unpaid volunteers from the Maultsby-Case Rolling Mill in Columbia who left their jobs to help defend the bridge. Three companies of similar white local home guards were at Wrightsville until the morning of the day the Rebels came calling but they had withdrawn into Columbia for breakfast and never returned. The quartermaster of the 27th Pennsylvania Volunteer Militia passed out rifle-muskets to the black company, which fought bravely and held their ground until ordered to retire (unlike the companies of the 20th PVM which panicked and fled in disorder from field).

6. I heard the Rebels kidnapped a lot of black people while in Pennsylvania, including in York County. General Jenkins’ Virginia brigade took more than 100 blacks from Franklin County, according to many diaries of Chambersburg-area residents written during the June 15-18 and June 19-22 raids that preceded the actual invasion. However, once the Rebels reached York County, there is one known case of a black boy being taken as a prisoner. He was later seen being held in Castle Thunder in Richmond, Virginia.

7. I heard that John Burns was the only civilian to fight against the Confederates. Burns was by far the most famous of a handful of civilians known to have been engaged with the Rebels at the battle of Gettysburg and a civilian named Henry Hahn bushwhacked and mortally wounded a Rebel cavalryman in a mountain pass west of Gettysburg in the week before the battle. Here in York County, there were far more civilians with guns. Several reports mention that residents of Hanover fired from their windows at Jeb Stuart’s cavalrymen during the June 30 battle of Hanover. At Wrightsville, besides the brave black volunteers, some residents reportedly were also on the firing line.

8. Abraham Lincoln was photographed at Hanover Junction and made a short speech there while on his way to give the Gettysburg Address. This may be the most debated Civil War topic in York County. Six photos, reportedly taken by Mathew Brady’s team of photographers, show Hanover Junction and the nearby railroad bridge. In four of them, a tall man wearing a stovepipe hat has been identified at times as Lincoln on his way to Gettysburg to give the Gettysburg Address in November 1863. Other scholars dispute this claim, citing numerous issues with the photos as well as recounting eyewitness testimony from those on Lincoln’s train that he (nor they) ever got off the train while it was parked at Hanover Junction before heading on to Gettysburg. I discuss both sides of this controversy in my book Soldiers, Spies, and Steam: A History of the Northern Central Railway in the Civil War. I do not believe this was Lincoln and I cite many, many reasons why not in the book.

9. The Rebels were going to burn York so the local civic officials were more than justified in surrendering the town. Rumors definitely abounded that the oncoming Rebels indeed planned to pick a town and destroy it. That fear was one of the motivators for civilian businessman A. B. Farquhar to ride to Abbottstown to negotiate (on his own, without authorization) to surrender the town. He wanted to protect the women and children in the event of hostile action. Upon his return to York, he informed the chief burgess and town council of his actions. A four-man delegation accompanied Farquhar to the new Rebel campsite at Farmers PO (along Jackson Square Road) and formally surrendered the town. When Jubal Early departed York on June 30 and headed west to Heidlersburg the day before the battle of Gettysburg, he left a message that he did not plan to burn York, although he cited similar Union atrocities in Virginia as justification had he burned York. He was under Robert E. Lee’s strict orders not to do so. However, in 1864, under Early’s orders, his subordinate Brig. Gen. John McCausland burned half of Chambersburg to the ground. Early at that time was an independent army commander not subject to Lee’s direct orders.

10. Most York County residents were “Copperheads” and openly supported the Confederacy. While it is true that in the 1860 and 1864 presidential elections, York Countians voted Democratic (as with all other elections in the 19th century), only a small percentage were actually vocally pro-Southern. Most were anti-Lincoln or anti-Republican or ambivalent in their political leanings (or voted Democrat for other reasons beyond supporting Southern ideals). Many Democrats supported the Union war efforts and served capably in “Mr. Lincoln’s army,” despite not voting for the Illinois politician. Yes, there were indeed Copperheads in York (some waved flags to welcome Early’s Confederates upon their march into town) and some fed them meals, but it appears these were a minority in the county.

Numerous books have been written about York County in the Civil War, including those from Jim McClure, Jeff Bortner, Ron Hershner, John Krepps, myself, and other authors. Once the library system reopens, please consider checking them out!