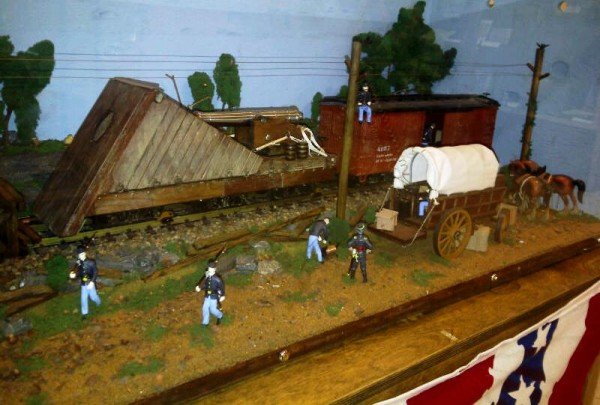 The Railroad Museum of Pennsylvania, located in Strasburg in east-central Lancaster County, has the largest collection of vintage Pennsylvania Railroad locomotives and rolling stock in the country. Located across the street from the historic Strasburg Railroad, which runs excursions with old steam engines.

Currently the RRMP is hosting an exhibit on the role of the railroads in the state during the Civil War. They include a series of photographs of Hanover Junction in neighboring York County, as well as other railroads in other parts of the Keystone State.

A highlight of the current exhibit is the old Civil War saddle used by General John Geary at the Battle of Gettysburg. After the war, Geary was a governor of Pennsylvania and an advocate of the expansion of railroads.

Here are a few photos from the museum’s collection…

If you go: The Railroad Museum of Pennsylvania is located at 300 Gap Road (Pennsylvania Route 741) just east of historic Strasburg, Pennsylvania. It is about a half-hour to 45 minutes from York, and a little more than an hour from Philadelphia. Take U.S. 30 to PA Route 896 (Hartman Bridge Road) and head south. Turn left (east) onto Gap Road. The museum will be on the right, directly across from the Strasburg Railroad. Combination museum admission / train ride tickets are available.

For more information: Visit the RRMP’s website and/or the Wikipedia article for the museum. Hours, directions, prices, and special events are listed on the museum’s website.