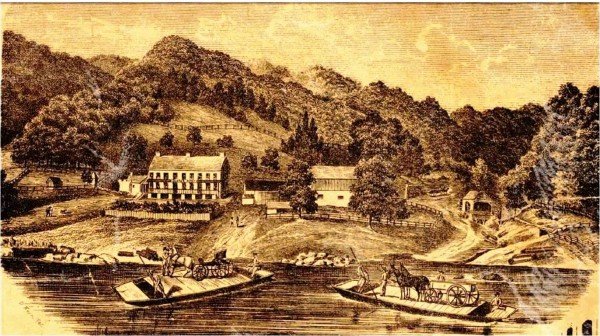 This idyllic scene from an 1860 Shearer & Lake map depicts Glatz’s Ferry on the Susquehanna River in eastern York County, Pennsylvania, in the years before the Civil War. The ferry crossing dates from colonial days, and the large multistory building in the left center is what is today known as the Accomac Inn, a very popular fine dining establishment. Ferries conveyed people, wagons, animals, and cargo from the Marietta region in Lancaster County to and from York County.

In 1812-13, crews erected a large wooden covered bridge just a few miles downstream at Wrightsville, which offered a link between Wrightsville and Columbia. The ferry service suffered as a result, but remained in operation sporadically through the mid-19th century.

Dr. Jacob Glatz purchased the ferry company and surrounding property in the 1840s.

In the late 1850s, entrepreneur John Noel leased the operation of Glatz’s Ferry. He expanded the attractions by turning the sawmill into a pavilion which he rented for picnics, weddings, and other social gatherings. 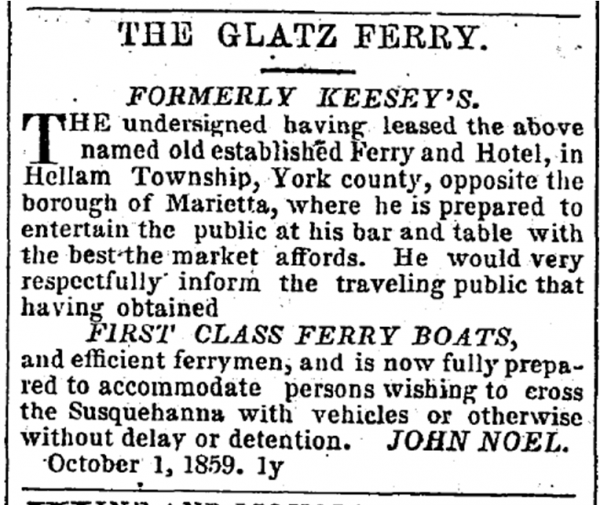 The Weekly Mariettian of February 9, 1861, was among the many issues of that newspaper to run Noel’s ads, which had not changed substantially since he took over the old Keesey’s Ferry service two years years previously.

The ferry service saw renewed patronage from 1863-1867 following the burning of the Columbia Bridge by Union militia during the Gettysburg Campaign.

Dr. Glatz, still the owner of the facility, took out an ad in the August 25, 1863, issue of the York Gazette in which he proclaimed, “This old Ferry — one of the oldest and safest crossings on the Susquehanna River — is now in charge of the undersigned, who has refitted  the old and built new boats, which will enable him to do ferrying with safety and dispatch.” 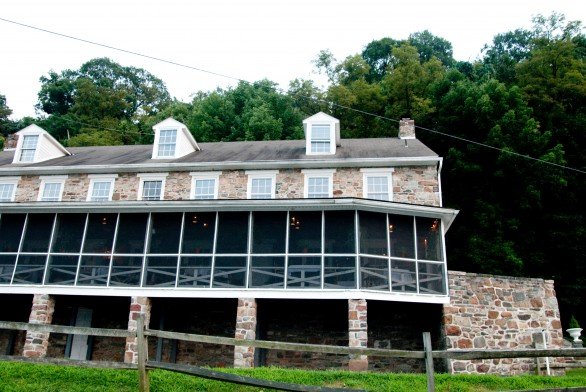 Photo courtesy of the Accomac Inn. The porch is a popular gathering place to dine or eat dessert while watching the broad river flow past. The historic old inn, currently under the ownership of York civic leader Doug Campbell, is open seven days a week for lunch and dinner. Local lore claims that the Marquis de Lafayette and his entourage were among the guests in the early days of the republic.

About a mile north of the inn, during the Gettysburg Campaign, area residents discovered the body of a Confederate soldier along the riverbank. There is much speculation on his identity and reason for his drowning, although my research suggests he was a member of the 17th Virginia Cavalry which was operating just upstream at York Haven and engaged in a brief firefight with the retreating 20th Pennsylvania Volunteer Militia. The stone grave marker washed away in the 2011 tropical storms which ravaged the region.

For much more on the rich history of this York County treasure, see Mr. Campbell’s history of the Inn and ferry service on the Accomac Inn’s website.