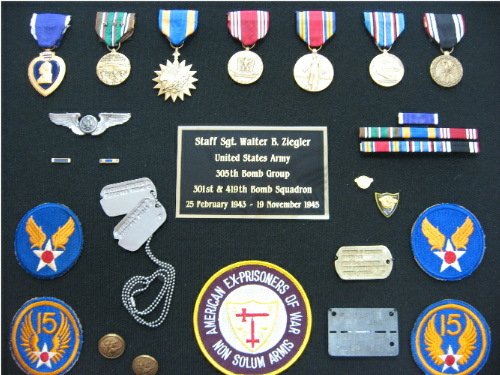 Walter Ziegler was captured by the Germans when his B-17 was shot down near Vienna on February 13, 1945. He was a prisoner of war for two and a half months. That might seem like a relatively short time as we go about our daily lives, but it must be an eternity when you don’t know if you will survive.

Walter was liberated on April 29. His family got the good news, through the Red Cross, on May 11. The official notice from the Army was finally telegraphed to his mother on May 28.

After recuperation at various hospitals, Ziegler returned to civilian life as a draftsman, working for several York manufacturers. When he passed away in early 2011, much of his estate went to ForSight Vision of York. ForSight’s president, Bill Rhinesmith, kindly shared Ziegler’s papers, which documented his ordeal, with the York County Heritage Trust Library/Archives and also allowed me to take the photos of Walter’s medals that you see here.

Zeigler’s story, as gleaned from his papers, is told in my recent York Sunday News column below:

York Man POW after B-17 shot down over Vienna
Mrs. Mary L. Ziegler received a disturbing telegram on February 26, 1945. It read:
“THE SECRETARY OF WAR DESIRES ME TO EXPRESS HIS DEEP REGRET THAT YOUR SON SERGEANT WALTER B ZIEGLER HAS BEEN REPORTED MISSING IN ACTION SINCE THIRTEENTH FEBRUARY OVER AUSTRIA. IF FURTHER DETAILS OR OTHER INFORMATION ARE RECEIVED YOU WILL BE PROMPTLY NOTIFIED.
J A ULIO THE ADJUTANT GENERAL.”

The telegram that Mrs. Ziegler received months later, on May 28, 1945, was much more welcome. It said:
“THE SECRETARY OF WAR DESIRES ME TO INFORM YOU THAT YOUR SON SGT
ZIEGLER WALTER B RETURNED TO MILITARY CONTROL.
J A ULIO THE ADJUTANT GENERAL”

Where had Walter been? Letters to Mrs. Ziegler signed by N. F. Twining, Commanding General of the Fifteenth Air Force, and J. A. Ulio, Adjutant General of the War Department, indicated that the B-17 on which Sgt. Ziegler was waist gunner had been shot down on a bombing mission over Vienna. The Flying Fortress carried a crew of nine, and five parachutes were observed deployed as the plane went down. One of the letters speculated that the survivors might be Prisoners of War, but the Army Air Forces and War Department passed no concrete information along to Mrs. Ziegler until the May 28 telegram above.

Walter luckily survived having his plane shot down and spending the next few months in German custody. He later wrote a narrative of his ordeal. He passed away early this year, leaving much of his estate to ForSight Vision, who shared papers and information on Ziegler’s Army Air Corps experience with the York County Heritage Trust Library/Archives.

Walter was drafted into the Army in February 1943 and first trained as an X-ray technician. A year later he was sent to Aerial Gunnery School and then assigned to the 15th Air Force, 5th Wing, 301st Bomb Group, 419th Squadron, arriving at his post in southern Italy in late October 1944. He lists 33 sorties his crew conducted until his Flying Fortress was shot down February 13, 1945 just southeast of Vienna, Austria. He normally would have not have been on that plane with that crew, but a photographer took up his place that day with his usual crew.

The B-17 took a direct hit from anti-aircraft fire to the No. 2 engine and wing. As waist gunner he was very close to the hit and had a hard time getting out of the plane as it spiraled downward. Three of the nine-man crew didn’t survive the crash. Walter sustained a fractured nose as he landed in two feet of snow, almost going into the Danube River. He eluded capture for the next several days, surviving on peanut butter and jelly sandwiches, moving at night and tying himself in trees during the day to get some rest up out of the snow. Dogs patrolling with German soldiers discovered him on February 17. He was interrogated by a German officer at a nearby farmhouse headquarters and taken the next day to a Luftwaffe (German Air Force) airfield near Parndorf, Austria, where the navigator and engineer from his plane were already being held.

They were fairly well treated by the German guards, but the Americans pushed to be moved to a regular POW camp. From the sound of artillery fire, they knew the Eastern Front was near, and they didn’t want to be there if the Russians attacked the German base. Two older Luftwaffe men were assigned to take them by train to Oberursel, Germany near Frankfurt. That was not a pleasant experience; their guards were kind, but the civilians were not friendly to anyone in American Air Force uniforms; bombs from Allied planes had been raining down on the German countryside in full force. Forced to stay overnight in Vienna because of Allied destruction of train tracks, the only place they were allowed to sleep was in the city jail. They were verbally and sometimes physically abused by civilians, especially at a stopover in Dresden, and glad for the protection of their guards. They didn’t know that the center of Dresden had been about 90 percent destroyed by Allied bombs a week before.

Ziegler was separated from his crewmates at Oberursel, interrogated again, and then sent to Dulag Luft POW camp at Wetzlar. RAF (Royal Air Force) bombers raided nightly, and Allied Forces were coming close, so the prisoners were taken to a POW camp at Nurnberg. He recorded terrible conditions there—hardly any food and so crowded that there was hardly room to lie down on straw on the ground under large tents. Again, the Allies were advancing; the prisoners were forced to march on to Stalag VII A at Moosburg. On the way the POW column was mistakenly strafed by U.S. Army Air Force P-47s. Three were killed and others wounded before the Americans realized the mistake.

The POWs were detained at Moosburg for the next two weeks, until liberated by the Allies on April 29, 1945. Ziegler recorded that there: “We were truly reduced to a SUB-HUMAN EXISTANCE.” He notes that he lost 40 pounds in his 76 days of captivity.

After liberation Walter was sent to RAMP (Recovered Allied Military Personnel) Camp No. 1 near LeHarve, France. Even though Mrs. Ziegler didn’t receive the official Army telegram quoted above until May 28, the Red Cross had notified her of his liberation on May 11. On May 14 a short article in a York paper shared the good news.

Ziegler was sent next to the Army’s Valley Forge General Hospital. He was discharged November 19, 1945. He married West York native and nurse Jean Greer, who had served in the Naval Cadet Nurse Corps, and settled down to a career as an engineer with several York manufacturing companies, including York International. Walter later obtained his pilot’s license for small aircraft.

I’m sorry I never met Walter Ziegler, but I am glad he left an account of his experiences behind so that we can appreciate what his generation did for us all. Many other York Countians could also relate stirring stories. If you are a veteran, or know one, please record your experiences or contact the York County Heritage Trust Library/Archives, which, in conjunction with York College’s oral history department, participates in the Library of Congress Veterans History Project. Your sacrifices should never be forgotten.

One bit of irony: Before being drafted into the Army, Walter worked at York Safe & Lock (Naval Ordnance Plant) as a tool inspector of the tools used to make the 40mm Bofors Gun, one of our premier anti-aircraft weapons.