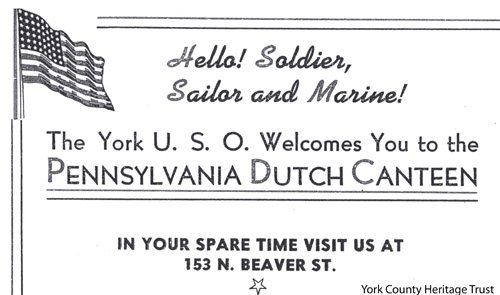 Here’s more from the 1943 York USO flier I mentioned in my last post. The statistics of services the York USO had provided, just up to September 1943, are pretty impressive. See below:

The York USO also published a very interesting quarterly newsletter, some of which are in the USO file at the York County Heritage Trust Library/Archives. The first one I picked up revealed the identity of the artist who painted the Pennsylvania Dutch murals that were depicted on the postcard in my last post.

As I suspected, the artist was Margaret Sarah Lewis, who sent the post card to Henry J. Young. The newsletter says: “Some connoisseur of art claimed the Pennsylvania Dutch decorations on our Canteen walls are a $1,000 job. Peg Lewis and her committee did them for the USO for 0.”