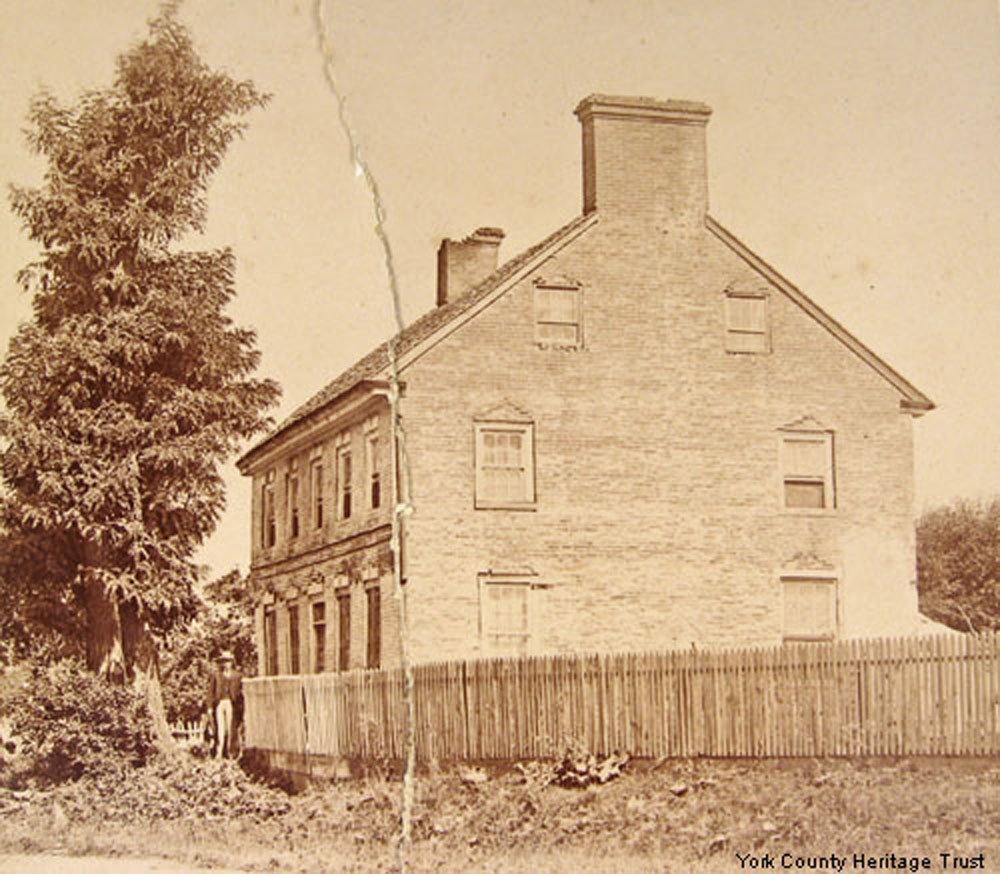 Spengler/Spangler house, c. 1904
As I promised in my recent post on York and the Lincoln Conspiracy, below is more on the Sherwood School, where John Wilkes Booth was reportedly sent by his family for a time, probably as a teenager. It is said to have been housed in the Spengler/Spangler house. (The original of the photo above is courtesy of the New-York Historical Society, New York City. This copy is courtesy of York County Heritage Trust.)
A lengthy ad for the school appeared in the April 9, 1851 Pennsylvania Republican. It reads:

DANIEL KENDIG, A.M., Head Master and Instructor in the Greek, Latin and English Languages.
HOWARD SHRIVER, A.B., Instructor in Mathematics and the Modern Languages.
Mr. JOHN T. LEIB, Instructor in Writing and Book-Keeping.
Prof. THEOPHILUS HENNEsS, Instructor in Instrumental Music.
Capt. THOMAS A. ZEIGLE, of the Worth Infantry, Military Director.
The next session of this Institution will commence on Thursday, the First of May. Its object is to furnish thorough and satisfactory improvement in a few, rather than a superficial knowledge of many branches.
Great attention is given to the physical development and health of the boys, and to this end a well-appointed gymnasium will be erected in the course of a few weeks, where they may have sufficient exercise when unfavorable weather would debar them from the ordinary sports of the play ground.
The Military Drill, so serviceable in physical education, and instilling in the mind habits of precision and order not so satisfactorily acquired in any other way, is not allowed, nevertheless, to interfere with the ordinary routine of school duty.
At all times, in the Study in the Dormitory, and in the Grounds, the boys are under the supervision of a Teacher.
Religion training is promoted by requiring regular attendance at morning and Evening Prayer, and an orderly and devout observance of the Public Services and Duty of the Church; by the inculcation of the essential principles of Christian Doctrine; and by such private admonition and encouragement as occasion may suggest.
Extensive buildings have been erected expressly adapted to the wants of the School, there will be room for ten additional pupils.

Click here for the probable site of the school.