A photo from York Hoover Body and Casket 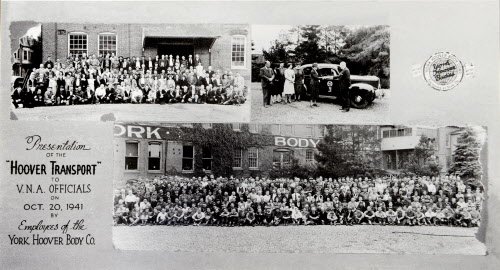 Just a fun photo and note to share today.

Harry S. Wildasin Jr. came by our office in the past couple of months and shared this picture, which was taken Oct. 20, 1941, of a presentation of the VNA official Hoover Transport, depicting employees of York Hoover Body at the bottom and York Hoover Casket at the top.

Wildasin, who was 7 when this photo was taken, later worked at the casket company from the 1950s until 1997, and when the company was going to get rid of the original image, which is framed and a few feet wide, he said he’d like to have it, and received it.

I’m wondering if anyone remembers this event, or working at York Hoover (either Body or Casket). Would love to hear your stories!

1 comment on “A photo from York Hoover Body and Casket”