As part of this Ask Joan question on Berry’s Restaurant, one reader, Mike Myers, mentioned the following:

“When I was in high school in the late sixties I worked for the city school district in the summers. We ate lunch at a Berry’s restaurant on (Pattison) Street between Betsy Ross school and I believe a pretzel baking factory. The restaurant is now torn down.”

Well, I received a few other memories about that former school that I wanted to share! 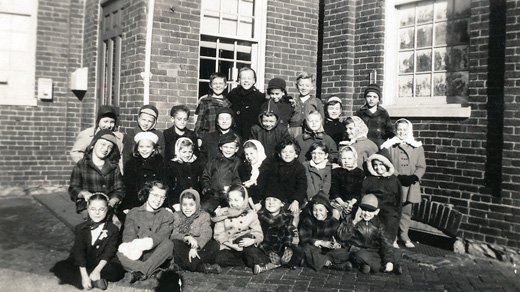 This photo came from Yvonne (Mansberger) Welt of York (and you can click to view a larger version.)

Yvonne says, “We’ve all heard of a one room school house, but I and many others had the great opportunity attending a four room school. It was called Betsy Ross and was located and still is at the corner of Prospect and Pattison St. It no longer serves as a school and I do not remember when it closed. Over the years it has roomed small businesses. Miss Gross taught 1st grade. She was also the principal. Miss Leonard had 2nd grade, Miss Treadway had 3rd grade and 4th grade was taught by Mrs. Earhart (I think that was her name). It was a time when schools still had safety guards to watch students cross streets on their way to and from school. I had the privilege of being a Lieutenant.”

She says of the picture, “The enclosed photo was taken in Dec. 1946. It shows the 2nd grade students outside the entrance of the school. I am in the front row, fourth person from the left. Apparently it must have been a warm day in Dec. After 4th grade, we went on to Franklin School which was located at the corner of East King St. and Albemarle St. for 5th and 6th grades. That building is no longer there. Then on to Phineas Davis for grades 7th, 8th and 9th. William Penn was the last stop for grades 10th 11th and 12th. We were the graduating class of ’57. Our 55th class reunion will be held this Oct. I wonder how many will recognize themselves in the photo?”

She also added that she and her husband met at Playland, another topic of many memories, and the two just celebrated their 51st anniversary in April; our congrats to them!

And, just another quick note on the school from my friend Betsy Baird; she says, “I remember that the Betsy Ross School on Pattison St. had, in back on it, the National Biscuit Co. Seems to me that was burned out.” Any memories of that to share, anyone?

1 comment on “Memories of Betsy Ross school in York”