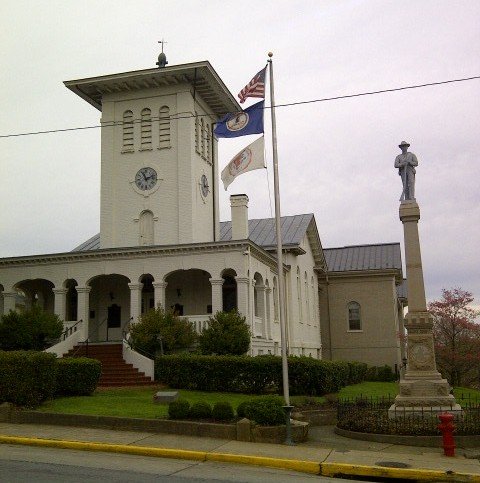 Orange County is located in a beautiful pastoral Piedmont region of central Virginia. Perhaps the best-known tourist attraction is Montpelier, the 2,700-acre estate and mansion of President James Madison, who played a large role in the creation of the United States Constitution. During the Civil War, parts of the battle of the Wilderness and the Mine Run Campaign took place on eastern Orange County, and the county seat of Orange and the nearby railroad village of Gordonsville saw small conflicts in their streets.

Orange, established in 1834, is a small crossroads town with the usual mix of modern structures and older, more historic buildings. It is some 28 miles northeast of Charlottesville and 4 miles east of Montpelier. The highlight is the old county courthouse (shown above) with its statue of a standing Confederate infantryman. The courthouse is a charming, well preserved building with its distinctive clock tower. The restored train station has been used in recent years as a civil rights museum, but it was not open on the morning as I paused in Orange on my way back home to York PA after a Civil War speaking engagement in Richmond. 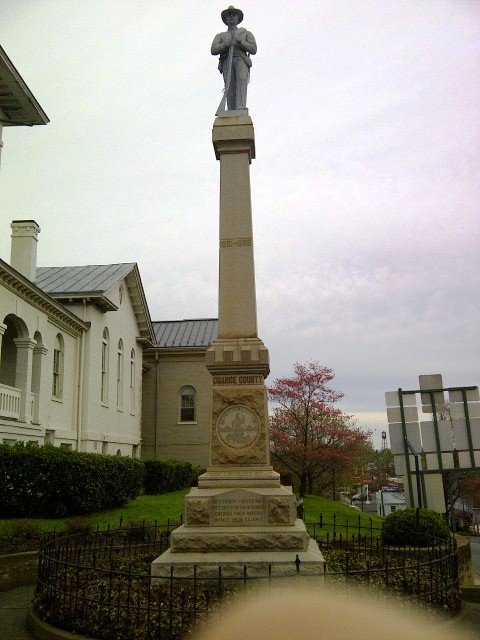 Orange County provided hundreds of soldiers to the Confederate army during the Civil War, as well as a rather efficient battery of artillery (appropriately named the Orange Artillery). Organized and mustered at Richmond in 1861, the Orange Artillery was part of Carter’s Battalion during the 1863 Battle of Gettysburg. Like many Confederate artillery batteries, it had a mixture of guns. One section contained a pair of 10-pounder Parrott rifles and the other had two 3″ Rifles. A part of Rodes’ Division of Ewell’s Corps, the Orange Artillery rolled through Franklin and Cumberland counties toward Harrisburg in the days before the fighting at Gettysburg. At Gettysburg, the guns fired at Union positions north and west of town on July 1 and then took part in the massive bombardment on July 3 which supported what became popularly known as Pickett’s Charge. The Orange County gunners fired a total of 882 rounds at Gettysburg. 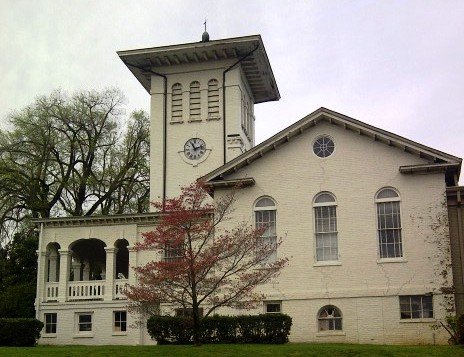 Among the Confederate military units hailing from Orange County were parts of the 6th Virginia Cavalry (including Company I, the “Orange Rangers”). This regiment fought at Fairfield, Pennsylvania, west of Gettysburg on July 2, 1863, as part of William “Gumble” Jones’s “Laurel Brigade.”

Companies A (the “Montpelier Guard”), C (the “Gordonsville Grays”), and F (the “Barboursville Guards”) of the 13th Virginia Infantry also were recruited primarily in Orange County. They were part of Brigadier General William “Extra Billy” Smith’s brigade of Jubal Early’s division. Following the Second Battle of Winchester in June 1863, the 13th remained in the Shenandoah Valley processing prisoners (including the 87th Pennsylvania from York and Adams Counties in southern Pennsylvania) while three of Smith’s other regiments marched into Pennsylvania in late June and camped along today’s North George Street (then the Harrisburg Pike) between York and Emigsville, likely on the sprawling King farm. As such, the Orange County foot-soldiers and their comrades in the 13th Virginia missed the battle of Gettysburg, rejoining their brigade on its way back south during Lee’s retreat. 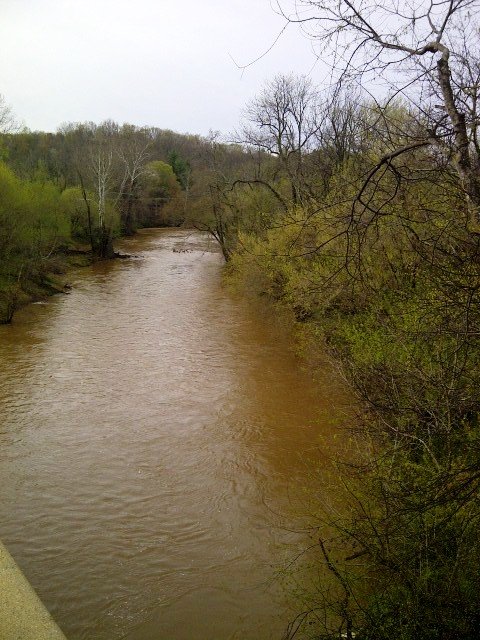 The meandering Rapidan River forms part of the natural boundary between Orange and Union-occupied Culpeper County, making it de facto the northern border of Confederate-held Virginia from 1862 until May 1864 when the Union army pushed southward toward Richmond. As such, considerable troop movement occurred in Orange County, and Robert E. Lee had his headquarters in Orange in the late summer of 1863 following the Gettysburg Campaign. He worshiped at St. Thomas Episcopal Church (founded in 1740), which still stands.

The building was used as a Confederate hospital following the battles of Chancellorsville in May 1863 and the Wilderness a year later. The nearby Orange & Alexandria Railroad depot was busy in those years as a supply depot and as a way stop for wounded or sick men coming and going from Orange. 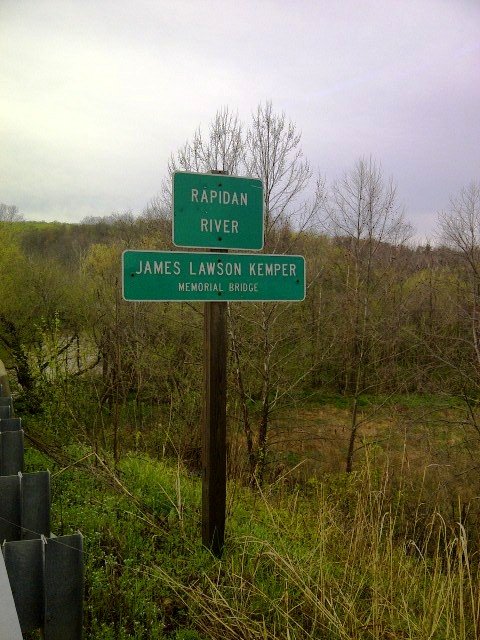 Confederate General James L. Kemper, famed for his role in Pickett’s Charge, after the war was governor of Virginia. He died at Walnut Hills in Orange County in 1895 at the age of 71. The bridge on U.S. Route 15 crossing the Rapidan River is named in honor of Kemper, who is buried in the family cemetery about a mile south of the historical marker. 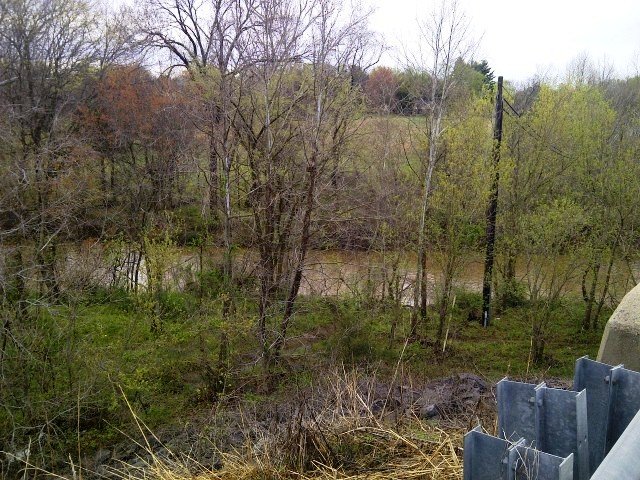 Looking south across the Rapidan from Culpeper County, Va., into Orange County along the James Lawson Kemper Memorial Bridge on U. S. 15. General Kemper’s grave is about a mile from this spot.

For a previous travelogue of a Civil War battlefield along U. S. 15 just north of Orange County, please click here for my photographs of the Cedar Mountain battlefield.