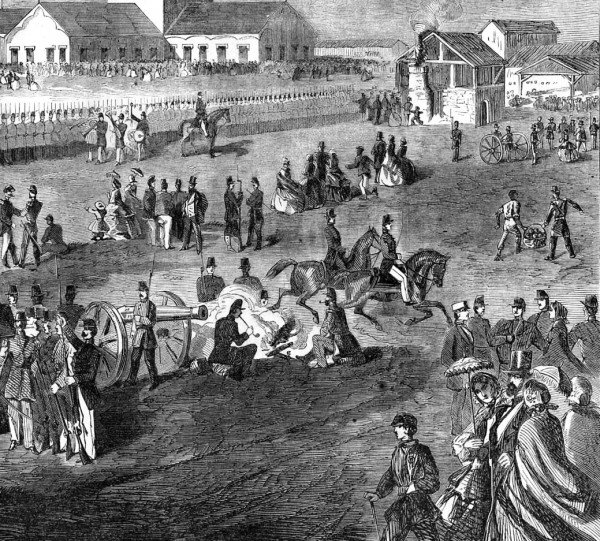 Camp Scott, named for army commander General Winfield Scott, was located at the intersection of E. King Street and S. Queen Street in York, Pa., on the fairgrounds. Within a month of the beginning of the Civil War, thousands of new troops occupied the barracks and tents.

The townspeople were very supportive of the soldiers, bringing food and other delicacies and housing some of the men when the camp was flooded because of heavy rain and melting snow in April. The camp brought a boost to York’s economy as soldiers and officers shopped in the local stores, had their photographs taken at a variety of studios, ate and drank at taverns, and used other town services and merchants.

By late May, the individual Pennsylvania infantry regiments had been organized into a full division, with three brigades.

Here is the order of battle (OOB) for that division, as taken from the May 23, 1861, Philadelphia Inquirer. 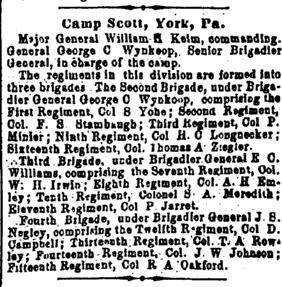 Of the officer listed in command of the regiments at Camp Scott in May 1863, one would be very controversial two years later during the battle of Gettysburg some thirty miles west of Camp Scott.

Col. Thomas Algeo Rowley of the 13th later became the colonel of the 102nd Pennsylvania. He survived a wound at the battle of Seven Pines and a few months later led a brigade at the battle of Fredericksburg. Promoted to brigadier general, Rowley commanded a brigade in the First Corps at Chancellorsville in May 1863 and at Gettysburg that July. His men took heavy casualties while fighting Harry Heth’s Confederates. He temporarily commanded Abner Doubleday’s division after that officer took over the First Corps following the shooting death of Lancaster’s Major General John Reynolds.

Thrown from his horse as the division retreated that afternoon toward Gettysburg, Rowley was temperamental and angry. He also reportedly was suffering from infected boils on his inner thighs. He wound up in an angry and public confrontation with a fellow general, and rumors flew that he was drunk. Court-martialed and convicted in April 1864 on formal charges, he was reinstated by President Lincoln and Secretary of War Stanton and served in western Pennsylvania. He feuded with Department of the Susquehanna commander Maj. Gen. Darius N. Couch during the 1864 cavalry invasion of Chambersburg and resigned his commission shortly after Christmas that year. 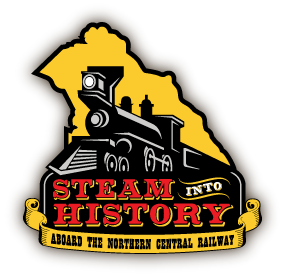