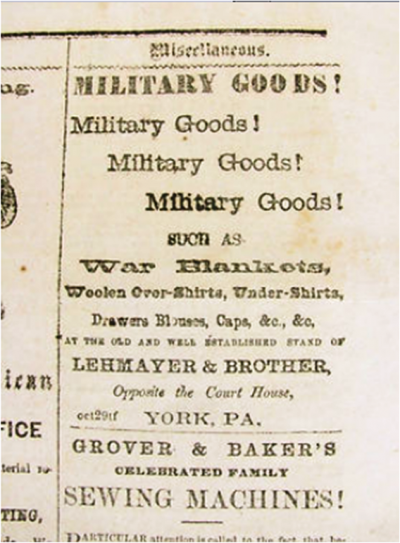 The American Civil War was certainly a tragedy of epic proportion, with more than 700,000 men dying of disease, accidents, or combat action. However, in many areas of the North in particular, the scaling up of the war effort brought new business to hundreds of factories, freight transporters, farmers, and retailers, including those here in York, Pa.

Do you think his ad caught the eye of the more than 1,oo0 patients in the hospital, many of whom were ambulatory and could make the short walk over to Market Street?

Other York businesses also catered to the thriving military traffic, including the local photography studios. Numerous wartime photos still exist of soldiers from the Army Hospital in particular, who took the time to get their likenesses taken at the various studios in York. Their payments certainly helped the local economy, as did the many saloons and taverns who opened their doors to the servicemen.

Several industries also profited from the war, including Billmeyer & Small, which manufactured railcars for the army. The local office of the Adams Express Company did a booming business delivering packages to the convalescent soldiers. Woolen mills in southern York County made shirts and blankets, perhaps some of the very ones advertised by Lehmayer.

Lehmayer & Brother in the last days of 1862 could not have imagined the disaster which awaited them, however, less than a year later. The following summer, Confederate soldiers replaced the York invalids as clientele when Maj. Gen. Jubal A. Early’s 6,000-man force invaded York County and camped in and around the town, including at the fairgrounds and army hospital. Only these men from Dixie would pay for their purchases with worthless (at the time) Confederate currency or bonds.

However, once the Rebels were gone and the hospital’s Union patients returned (augmented by 2,000 new wounded from the Battle of Gettysburg), Lehmayer’s business returned. Newspapers later in the war again advertised military goods.

Lehmayer’s remained in business well in the 20th century, moving first to 44 N. George Street before abandoning the city for the suburbs and Colonial Shopping Center on S. George Street. 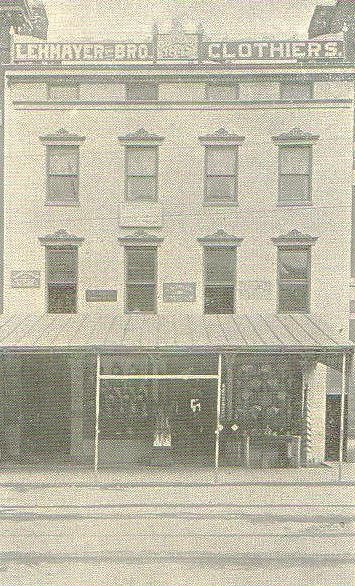 Here is a little more on Nathan Lehmayer, one of York’s most significant Jewish merchants, taken from George Prowell’s 1906 History of York County:

“Nathan Lehmayer, the oldest living merchant in York, was born in Germany in 1833, son of Moses and Caroline Lehmayer. The father died in 1847 in Germany where he had been a merchant for thirty years, and after his death Mrs. Lehmayer brought her children to America, where they located, settling in York, Pa.

Nathan Lehmayer and his brothers, Simon and Joseph, were the founders of the well known men’s clothing and furnishing business of Lehmayer Brothers at York. The firm was established under that name on the site of the present large store, the business at that time, however, being very small in comparison to the patronage the firm enjoys at present. Joseph Lehmayer died in 1877 and Simon in 1890, while Nathan continued the store under the same name. On Feb. 17, 1904, his three sons, Martin, Louis and William, were admitted into partnership with their father, and the membership of the firm has continued the same since that time.

The name of Lehmayer Brothers is known throughout York county, and the store has the reputation of being the most reliable of its kind in the city of York. In proportion to the growth of the business so has Mr. Lehmayer increased his building and stock, being now the employer of fourteen people. The building, 34×120 feet, is equipped with modern fixtures and appliances, and the business has grown to large proportions — solely because of the quality and reliability of the goods sold, and through Mr. Lehmayer’s good business judgment and strict attention to business.

Since 1855 Mr. Lehmayer has been a member of the Masons at York. In religious matters he is connected with the Reformed Hebrew Church. On Jan. 13, 1861, he was united in marriage with Mary Rosenbaum, daughter of Moses and Caroline Rosenbaum, of Philadelphia.”