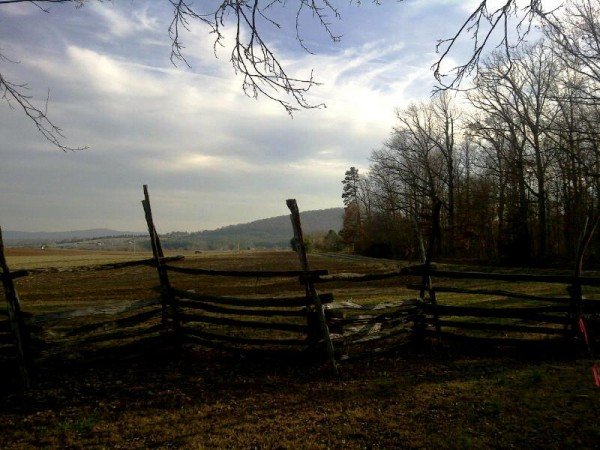 Cedar Mountain was one of the first battles in the 1862 Northern Virginia Campaign, which culminated with the Second Battle of Manassas and the subsequent fight at Oak Hill/Chantilly.  This was the only battle in which Stonewall Jackson is known to have drawn his sword (well, at least he tried to draw it from its scabbard but they were rusted together). The old battlefield has in recent years been purchased, preserved, and interpreted through the efforts of various individuals and groups, including the Civil War Preservation Trust.

On a recent business trip while driving home from Charlottesville, I stopped at Cedar Mountain for the first time and hiked around for a while. Here are a few of the photos I took on that crisp December afternoon. 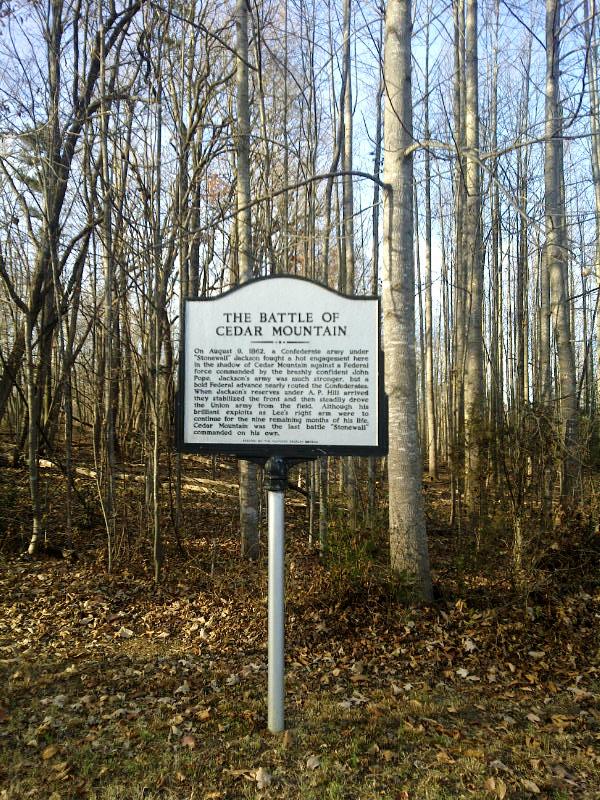 From Wikipedia: “The Battle of Cedar Mountain, also known as Slaughter’s Mountain or Cedar Run, took place on August 9, 1862, in Culpeper County, Virginia, as part of the American Civil War. Union forces under Maj. Gen. Nathaniel P. Banks attacked Confederate forces under Maj. Gen. Thomas J. “Stonewall” Jackson near Cedar Mountain as the Confederates marched on Culpeper Court House to forestall a Union advance into central Virginia. After nearly being driven from the field in the early part of the battle, a Confederate counterattack broke the Union lines resulting in a Confederate victory. The battle was the first combat of the Northern Virginia Campaign.” 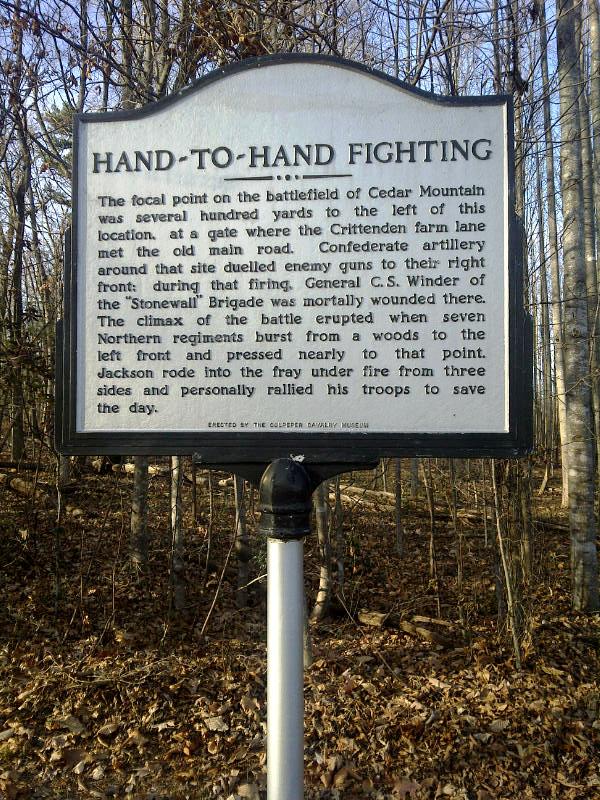 “On the morning of August 9, Jackson’s army crossed to the Rapidan River into Culpeper County, led by Maj. Gen. Richard S. Ewell’s division, followed by Brig. Gen. Charles S. Winder’s division, with Maj. Gen. A.P. Hill’s division in the rear. Just before noon, Brig. Gen. Jubal Early’s brigade, the vanguard of Ewell’s division, came upon Federal cavalry and artillery occupying the ridge above Cedar Run, just to the north-west of Cedar Mountain. Early brought up his guns and an artillery duel began between the opposing forces as Early’s infantry formed a line on the eastern side of the Culpeper-Orange Turnpike (present day U.S. Route 15) on the high ground on the opposite bank of Cedar Run.

As the rest of Ewell’s division arrived they formed on Early’s right, anchored against the northern slope of the mountain and deployed there six guns on its ridge. Winder’s division formed to Early’s left, on the west side of the Turnpike, with Brig. Gen. William Taliaferro’s brigade closest to Early, and Col. Thomas S. Garnett’s on the far Confederate left in a wheat field at the edge of a woods. Winder’s artillery filled a gap on the road between the two division, the Stonewall Brigade, led by Col. Charles R. Ronald, was brought up in support behind the guns. A.P Hill’s division, still marching up the Turnpike, was ordered to stand in reserve on the Confederate left.” 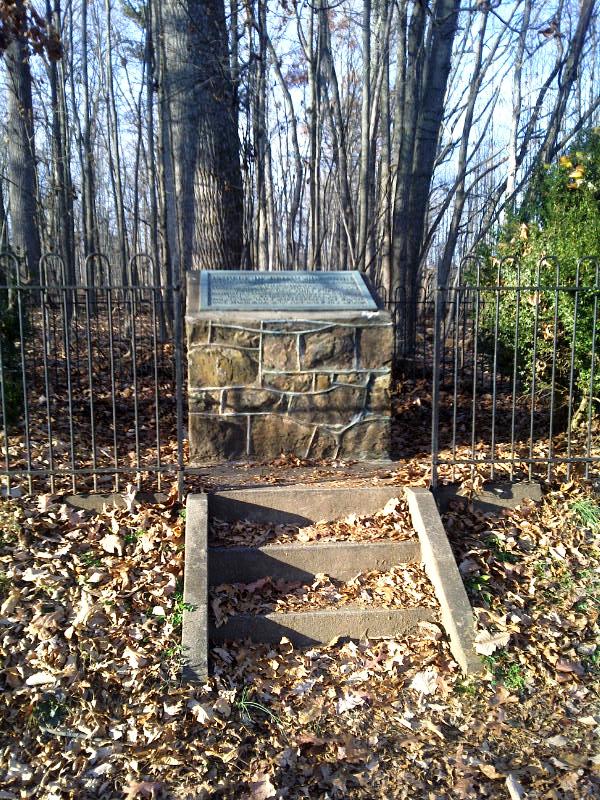 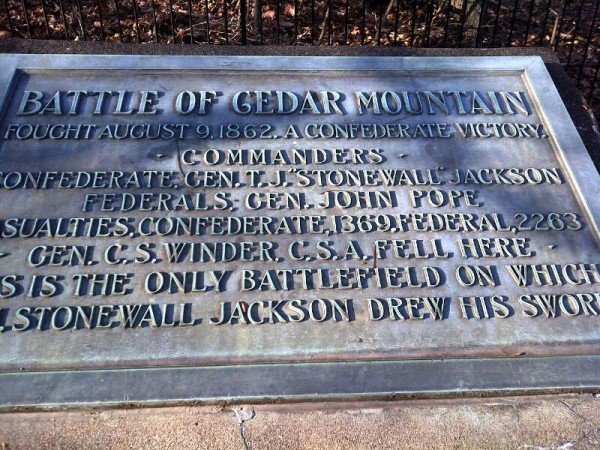 “The Federals formed a line on a ridge above Cedar Run, with Brig. Gen. Samuel W. Crawford’s brigade on forming the Union right in a field across from Garnett and Brig. Gen. Christopher C. Auger’s division on the Union left to the east of the Turnpike. Brig. Gen. John W. Geary’s brigade was anchored on the Turnpike opposing Taliaferro, while Brig. Gen Henry Prince’s brigade formed the far left opposite Ewell. Brig. Gen. George S. Greene’s understrength brigade (only two regiments) was kept in reserve in the rear.

A little before 5:00 p.m. as the artillery fight began to wane, Confederate Brig. Gen. Charles S. Winder fell mortally wounded. He had been ill that day and was taken onto the field in an ambulance wagon. While attempting to direct his troops, he was struck by a shell fragment. Winder’s left arm and side were torn to pieces, and he died a few hours later. As a result, command of the division devolved on William Taliaferro, who was completely ignorant of Jackson’s battle plan. Dispositions on his part of the field were still incomplete; Garnett’s brigade was isolated from the main Confederate line, with its flank dangerously exposed to the woods. The Stonewall Brigade was to have come up to support them, but remained a half mile distant behind the artillery. 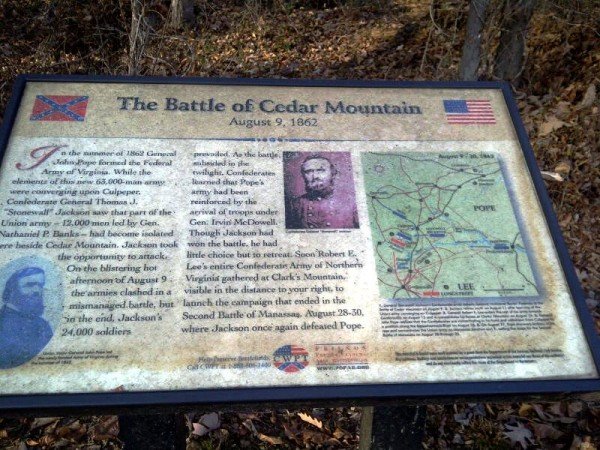 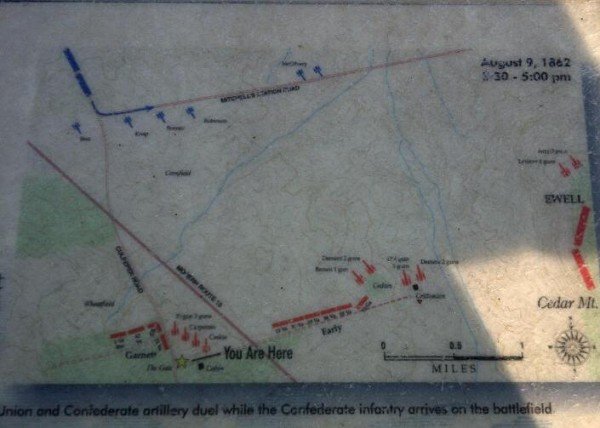 On the left Crawford attacked Winder’s division, sending one brigade directly at the Confederate line and another brigade through the woods on a flanking movement. The Federals came from the woods directly into the flank of the 1st Virginia Infantry, who under the pressure from attack on two fronts broke for the rear. The Federals pushed on, not waiting to reform their lines, rolling through the outflanked 42nd Virginia until they found themselves in Taliaferro’s and the artillery’s rear. The Stonewall Brigade came up and was swept aside by Crawford’s troops before it had a chance to react. Jackson ordered the batteries withdrawn before they were captured, but Taliaferro and Early’s left were hit hard by the Union advance and threatened to break.” 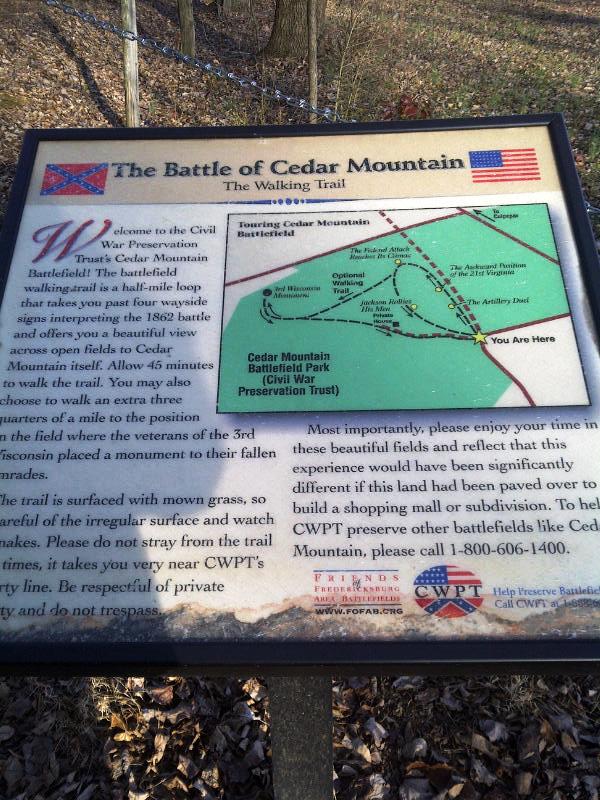 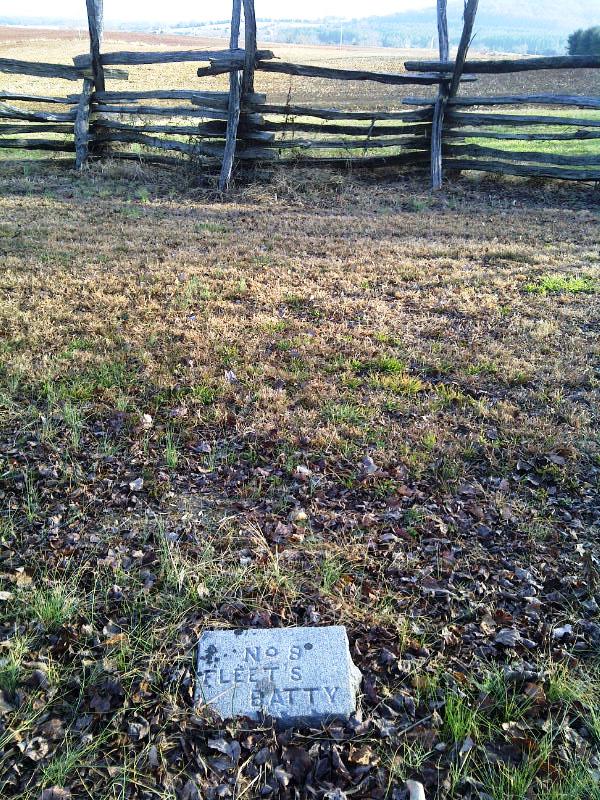 “At this dire point, Gen. Jackson rode to that part of the field to rally the men and came upon his old brigade finally being brought up to reinforce the line. Intending to inspire the troops there, he attempted to brandish his sword; however, due to the infrequency with which he drew it, it had rusted in its scabbard and he was unable to dislodge it. Undaunted, he unbuckled the sword from his belt and waved it, scabbard and all, over his head. He then grabbed a battle flag from a retreating standard bearer and yelled at his men to rally around him.

The Stonewall Brigade, heartened by their commander, launched into the Union troops and drove them back. By this point, Banks’s men were becoming tired and disorganized, with their ammunition nearly gone. Without any support, his men had been unable to follow up on their initial success. In their zeal, the Stonewall Brigade pursued the Federals as they fell back, but soon found themselves beyond the Confederate line and without support. The Federals reformed and attacked, driving the 4th and 27th Virginia back. But the actions of the Stonewall Brigade gave the Confederate line time to reform and A.P Hill’s troops to come up and fill the gaps from Winder’s broken regiments.

Jackson ordered Hill and Ewell to advance. He encountered Brig. Gen. Lawrence O’Bryan Branch (a career politician) making a lengthy speech to his troops, and urged him to press forward. The Union right immediately collapsed. Ewell, having difficulty silencing his guns, was delayed, but the Union left began to waver at the sight of Crawford’s retreat and were finally broken by a charge down Cedar Mountain by Brig. Gen. Isaac R. Trimble’s brigade.

Despite bringing up Greene’s reserve brigade in support, by 7 p.m. the Union line was in full retreat. In a last-ditch effort to help cover his infantry’s retreat, Banks sent two squadrons of cavalry at the Confederate line. They were met with a devastating volley from the Confederate infantry posted behind a fence on the road, allowing only 71 of 174 to escape.

The Confederate infantry and Brig. Gen William E. Jones’s 7th Virginia Cavalry hotly pursued the retreating Federals, nearly capturing Banks and Pope, who were at their headquarters a mile behind the Federal line.

After a mile-and-a-half of pursuit, Jackson grew weary as darkness set in, as he was unsure of the location of the rest of Pope’s army. Finally, several Union infantrymen captured by the 7th Virginia informed the Confederates that Pope was bringing Sigel forward to reinforce Banks. Accordingly, Jackson called off the pursuit and by around 10 p.m the fighting had ceased. By this point, Brig. Gen. James Ricketts’s division of McDowell’s corps was arriving, which effectively covered Banks’ retreat. 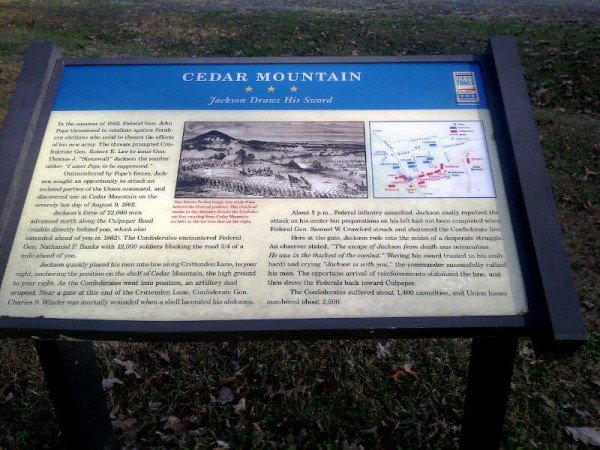 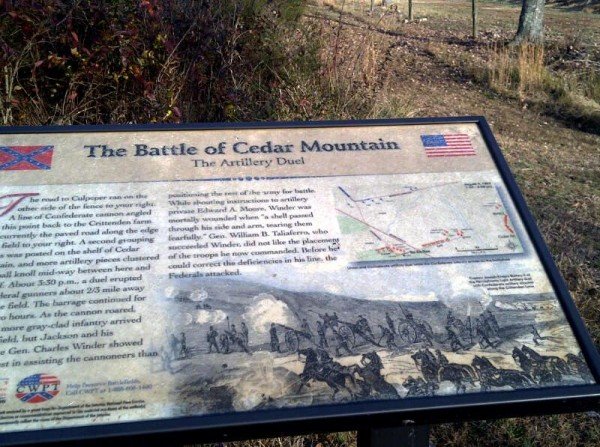 “Losses were high in the battle: Union casualties of 2,353 (314 killed, 1,445 wounded, 594 missing), Confederate 1,338 (231 killed, 1,107 wounded). Crawford’s brigade had lost over 50% of its total strength, including most of its officers. Prince’s and Geary’s brigades suffered 30–40% casualty rates. Both generals were wounded, and Prince was also captured. Confederate Brig. Gen. Charles S. Winder was mortally wounded by a shell.

For two days, Jackson maintained his position south of Cedar Run on the western slope of the mountain, waiting for a Federal attack that did not come. Finally, receiving news that all of Pope’s army had arrived at Culpeper Court House, on August 12, Jackson fell back on Gordonsville to a more defensive position behind the Rapidan River.

Weather and poor communication with his divisional commanders had robbed Jackson of the initiative in the fight. Still expecting to face the same cautious opponent from the Valley, he was taken by surprise and very nearly driven from the field. Excellent commanding by the Confederates at the crucial moment of the battle and the fortuitous arrival of Hill staved off defeat, eventually allowing their numerical superiority to drive the Federals from the field.

For his part, Banks, having been soundly defeated by Jackson in the Valley, was anxious to make up for previous losses. Rather than fighting a defensive battle from a strong position because he was outnumbered 2 to 1, giving time for the rest of Pope’s army to arrive, he decided to take the initiative and attack Jackson before he could fully form his lines. The bold move very nearly paid off, but in the end he was again defeated by his old foe.

With Jackson on the loose, wreaking havoc against Union forces, General-in-Chief Henry W. Halleck became apprehensive and called off Pope’s advance on Gordonsville, thereby giving Lee the initiative in the Northern Virginia Campaign. The battle effectively shifted fighting in Virginia from the Virginia Peninsula into northern Virginia.” 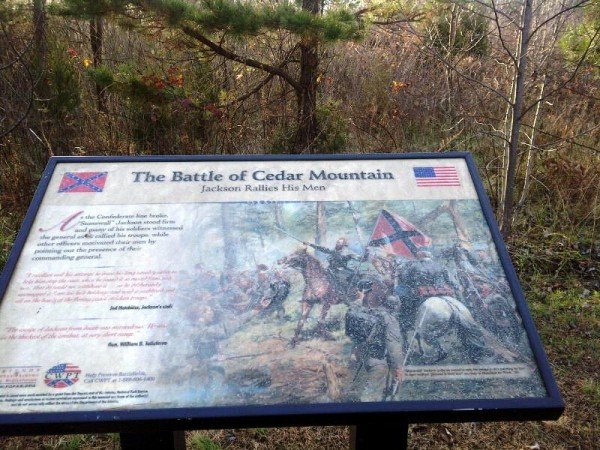