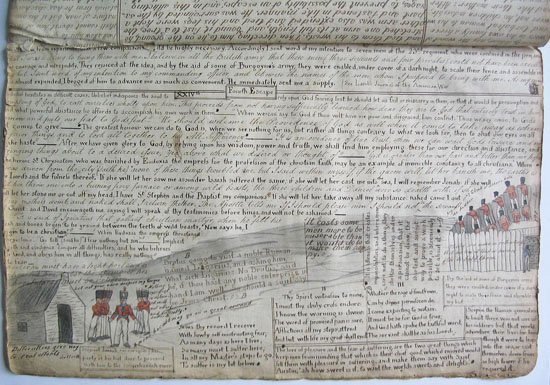 Last month I shared the first and second of four drawings attributed to Sergeant Roger Lamb of the Royal Welsh Fusiliers (23rd Regiment of Foot), and formerly of the 9th Regiment, portraying his arrival at Camp Security and subsequent escape. The text is almost identical to his 1809 memoir A Journal of Occurrences during the Late American War. The copies were found last year at the British National Army Museum and permission was obtained to share them. This link will take you to the first drawing and this link will take you to the second one.

The third drawing is shown above. Much of the text on the pages has unrelated religious content, which I have not transcribed, but anything relevant to Camp Security is transcribed below.

“Fourth Escape” refers to Lamb’s previous three successful escapes from captivity by the Americans, the first time at Saratoga with the rest of the Convention prisoners, who made up the initial population of Camp Security. He had found his way back to the British forces and was captured at subsequent battles.

The relevant text at the top of the page reads: “I well knew, from experience that a few companions would be highly necessary. Accordingly I sent word of my intention to seven men of the 23rd regiment who were confined in the pen, and that I was willing to bring them with me. I believe in all the British army that these men (three serjeants and four privates) could not have been excelled for courage and intrepidity. They rejoiced at the idea; and by the aid of some of Burgoyne’s army, they were enabled, under cover of a dark night, to scale their fence and assemble in my hut. I sent word of my intention to my commanding officer and likewise the names of the men whom I proposed to bring with me. As my money was almost expended, I begged of him to advance me as much as convenient. He immediately sent me a supply. (See Lamb’s Journal of the American War.”

A drawing on right hand side of the page shows British soldiers boosting others over the side of the stockade fence. A soldier in blue, probably an American guard, stands by the front gate. This drawing is captioned: “By the aid of some of Burgoyne’s army, they were enabled under cover of a dark night to scale their fence and assemble in my hut.” The stockade seems to be somewhat uphill a distance away from the hut. “Any man may climb it if others hold the ladder.” is written above the stockade scene, and a sentence is also written across the stockade: “There are some so refractory that no law of God or man is able to hold them.”

The drawing on the lower left shows eight British soldiers in front of a hut. The caption reads: “Serjeant Lamb encouraging his party at his hut door to proceed with him to the Susquehannah river.” The comments “Let not your ears despise my tongue,” “Nothing excellent is obtained without effort and difficulty” and “Difficulties give way to real efforts” probably refers to Lamb’s efforts to persuade the others to join him in the escape. The biblical references and the stories in the rest of the text do not refer specifically to the planned escape, but have a theme of succeeding if a sincere effort is made.

This link will take you to all my Camp Security posts.

To find out more about Camp Security and to make a donation to help secure this important site go to campsecurity.com.