Ask Joan: Reporting on what you want to know edition

Today’s Ask Joan features a combination of two of my favorite things: Helping readers with their questions about York County, and telling fun stories in our newspaper and on our websites.

1. Is it Leader or Leaders Heights?
2. Average home prices in York
3. What’s our bus doing in Texas?

1. I have a question that’s been bothering me and some friends for a while now. Is it LEADER or LEADERS Heights? How did this discrepancy start? The school is LEADERS Heights Elementary, and Google also recognizes the area as LEADERS Heights. However, the street signs and the animal hospital refer to LEADER. Strangely enough, I seem to recall the state road signs near 83 initially reading LEADERS after the construction, but the “S” was quickly covered to read LEADER. (Maybe I’m imagining that, but I don’t think so). Do you or any readers have any insight??? PLEASE!!! (And thanks.)
– Josh M.

This is one our earlier reporting can help us tackle! We actually ran a story in 2007 about just this issue, because that’s when the York Township Commissioners put their foot down and decided once and for all that all official township signage would read Leader Heights. That was before the death of former Gov. George M. Leader, who was then 89 years old, and he was able to provide some first-hand knowledge about the area named for his family, which in all official capacities is Leader Heights.

Back in the 1920s, Leader said his family owned about 100 acres of land in York Township that encompassed both sides of what is now the Susquehanna Trail.

At the top of a particularly steep and narrow portion of the trail, Leader’s grandparents, George Michael and Mabel Leader, owned a barn, which was used to advertise the furniture store owned by another relative, N.J. Leader.

“Back then, the road was known as Mirror Hill,” said Leader.

But over time, his grandmother thought of a name she liked better.

“She wanted to call it Leader’s Height,” he said.

The name stuck among locals so much that by 1957 – when PennDOT was building the I-83 interchange – township officials named the entire area Leader Heights, minus the possessive letter “s” in Leader but adding an “s” to Height.

But as the area grew, both names remained in play as far as naming streets, businesses and schools were concerned. One of the earliest examples is Leaders Heights Elementary School, which was built in 1964.

PennDOT maps from 1976 forward list the area as Leader Heights.

For all the brouhaha, the former governor said he has never really considered the matter an issue. “My family is honored that our name is tied to the area.”

Another one our coverage can help answer! We report on such housing data every month, and as of the most recent numbers reported by RAYAC, the Realtors Association of York and Adams Counties, the median home sales price in York County was $142,000.

You can read more about the housing stats here. 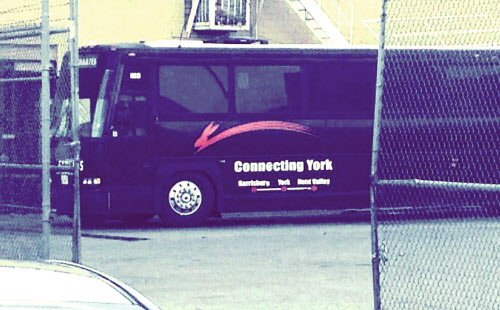 3. My son Jeff Ferree took this photo of a Rabbit Bus in the city of El Paso, Texas … and sent it via Facebook. What’s it doing there? It’s a long way from York.
– Janet Ferree

This was a fun email I received during the past week. I shared Janet’s question with our day content editor, Kate Harmon, and she and business reporter Brett Sholtis talked to the folks at Rabbittransit, and they found out exactly what the deal is with our out-of-town bus!

Check out Brett’s story here. Turns out this bus in particular, while no longer “ours,” has more than 900,000 miles on it – whoa!