Common (and not so common!) myths of the Gettysburg Campaign: Part 1 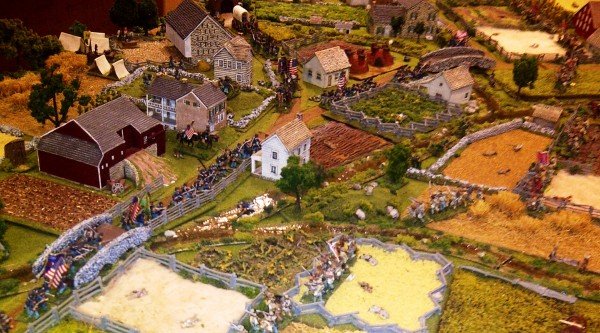 This wargaming demonstration by Scott Mingus includes several buildings which should be familiar to Gettysburg buffs, including miniatures of the Culp farm (left) and the Rose house (upper right). The scene represents a fictional battle.

So many myths and misconceptions exist concerning the 1863 battle of Gettysburg and the surrounding summer campaign. Some of those legends have become accepted as fact and are often repeated in various books and articles. Here is a sampling:

1) Pickett’s Charge was the high water mark of the Confederacy. While certainly celebrated and unfortunately bloody, the more correctly named Pickett-Pettigrew-Trimble Assault did not do significant damage to the Union lines at Gettysburg. A new book by Dr. Phillip Tucker Thomas argues that a charge the day before Pickett was of more tactical importance and had a greater chance of success, specifically the attack of Brig. Gen. William Barksdale’s Mississippi Brigade which swept through the Peach Orchard and threatened the Union center. Others have suggested the high water mark was the attack on East Cemetery Hill and Culp’s Hill, or the failure to take Cemetery Hill on Day 1. Still others, perhaps correctly, cite the actual high water on the Potomac River which delayed the invasion by a couple of days as being the most significant aspect of the campaign’s ultimate failure. Of course, Antietam also has its claimants as to the high water mark. 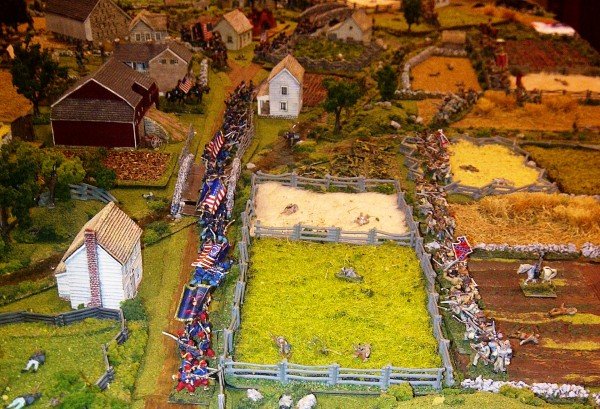 2) A sharpshooter killed Union Maj. Gen. John F. Reynolds — this has often appeared in literature, and has almost as often been refuted. Many battlefield students now suggest that a volley from one of Jay Archer’s Confederate regiments randomly killed the most senior officer to perish at Gettysburg. A number of claimants emerged after the war; most appear unreliable.

3) Little Round Top was the key to the Union defenses and Joshua Lawrence Chamberlain and his 20th Maine Infantry saved the army from disaster — While the Mainers’ efforts certainly were heroic and should not be discounted or dismissed, there were a number of other Union units and officers whose efforts were as critical or perhaps even more so. However, thanks to Killer Angels and the film, their efforts often are under recognized. The list includes George Sears Greene’s impassioned defense of Culp’s Hill; the 1st Minnesota’s charge into the Codori Thicket to stop Wilcox’s Alabamans; Coster’s brigade slowing Early’s division on day 1; and several others.

4) The first shot at Gettysburg was fired by Marcellus Jones —  Possibly true for July 1 to open the actual battle of Gettysburg about 7:30 a.m., but many authors fail to mention that there was fighting on June 26 around Gettysburg which resulted in the death of one Union cavalryman and the wounding of several other men. Some accounts also suggest there was shooting north of Gettysburg on July 1 earlier than Captain Jones’ account.

5) It was all about shoes — Certainly the Confederates needed footwear. Many reports here in York County PA describe the Rebels as being barefoot and several soldiers had bleeding feet that required them to be carried on horses or in ambulances. The hard-packed gravel roads of south-central PA indeed quickly wore out shoe leather. However, Jubal Early had marched through Gettysburg on June 26 and requisitioned supplies, including shoes. They collected a lot of horseshoes and nails, but did not locate any significant stores of human footwear. Maps of Adams County in 1858 indeed show a few shoe shops, but in a town of 2,400 people there would not have been large quantities. On June 28, Early ransomed York, a much larger town, for 2,000 pairs of shoes and boots, and put all of the town’s cobblers to work making them (the town did not have an inventory of that size just sitting around). Confederate Maj. Gen. Harry Heth first mentioned his coming to Gettysburg for shoes in an interview well after the war; his official report makes no such claim (instead his movement into town was a reconnaissance mission to find out what the Yankees were up to). Some accounts suggest that he was indeed looking for shoes — the shoes on the feet of the presumed militia which was then supposedly occupying the town (it turned out that it was Buford’s cavalry of the Army of the Potomac, not mere militia).

6) The weather during the battle was brutally hot and oppressive — while some soldier accounts indeed discuss the heat, they are mostly from July 3. The first and second were relatively cool and cloudy for early July; in fact much of the week preceding the battle was quite rainy. Almost 1.3 inches fell in a torrential downpour the night of June 25; another storm (a nor’easter) hit on the night of June 28 with high winds drenching some areas around Gettysburg; and sporadic light showers occurred into the morning of July 1.

The following table shows the temperatures at Gettysburg in the days preceding the battle, as reported by Jacobs’ son Henry in the Star and Sentinel, July 30, 1885, based on information from his father’s notes.

During the Battle of Gettysburg, Professor Jacobs recorded the weather as follows:

Continue reading in part 2 of this brief series on the myths of Gettysburg.