Here is the latest on the Mobile Media Lab project in York:

We have a name:
We brainstormed throughout our company and sought suggestions from the public. The list of suggestions included the phonically popular but visually confusing @Mobile, the friendly-to-almost-cuddly D.A.V.Y. (Digital Acceleration Vehicle for York), and the funny-as-heck-but-no-chance-in-heck Mobile Editorial Technology Hauler Lab, or M.E.T.H. Lab.
In the end, we have arrived at …
The NewsVroom!

It conveys a sense of energy and forward motion. It relates to the core of our operations, the center of our service to the community. It even has a sense of York’s Harley-Davidson connection. This should also lend itself to lots of fun ideas for visuals to be used in promotional materials. 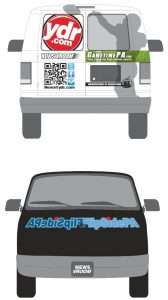 We have most of the equipment in hand or ordered

The van is now in the hands of Total Identity Solutions in Spring Grove, the company that is wrapping it. We are scheduled to get it back on Aug. 24.

We have an aggressive schedule through September
The debut is all set for the Aug. 31 football game at Central York High School. By pure coincidence, the football player on the side of the van is Marquis Fells, a senior on that team. He’s pretty jazzed about this. (Get to know him a bit in this video clip.) We will also be at two other football games in September.
We will be at the York Fair all day every day for 10 days.
We will be at a congressional debate on Sept. 20.
We will be at the White Rose Thunder motorcycle event Sept. 27
We are launching a promotional campaign
Facebook account for NewsVroom has been created. Please like us.
Twitter account for @NewsVroom should be up tomorrow. Please follow us.
We will create a unique blog for NewsVroom.
Email address of newsvroom@ydr.com has been created.
An online promotion will include an animated image of the van racing across the web page. “Catch the NewsVroom” might be the lead phrasing. Through online and print ads, we will promote the debut and the general purpose and encourage people to request NewsVroom for their events.
We are nearly done with a script for the first night
From specific arrival times to specific duties for everyone working the van, we are over-preparing for the chaos of the first night.

The launch event will focus on the GameTimePA brand. That is our regional high school sports brand. Contests, engagements, announcements, etc., will focus on promoting GTPA’s unique features, such as livestreaming of games, LiveScoreboard, the GTPA mobile app, etc.
We are struggling to stay under budget
I have run into several unanticipated costs, such as the inverter and lanterns, etc. I have also run into several items that cost more than estimated, such as the tents.
However, because some other items came in under budget, we are still aiming to come out even. But it will be close and we might need to hold off on some items that could make a difference.
The big things, though, are taken care of.
We landed $5,000 in sponsorships, and are looking for more
Beasely Ford-Lincoln is the top sponsor and ponied up $4,000 in support.
Total Identity Solutions is the company that is wrapping the van. They put up $1,000 in sponsorship.
Logos for both companies are incorporated into the design.
Top people at each of these companies said they understood the public service nature of this effort and really wanted to give something back to the community. Our thoughts exactly.
More details to come soon.
Any questions or suggestions?