Posted by YDR InsiderJanuary 23, 2012 Behind the scenes, Editor, Staff Q&As 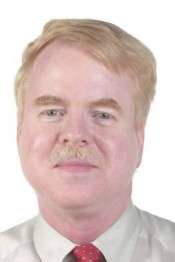 To help you get to know our newsroom staff a bit better, a series of question-and-answer posts with each journalist will run on Mondays. This morning, meet editor James McClure, who is also East Region editor, Digital First Media. He’s been with the Daily Record for more than 25 years, so he’s a familiar face to many in York County. You’ve seen his posts on YDR Insider about how we interact with readers and When Benjamin Franklin, digital revolution and mentorship of journalists met up.

Name: James McClure
Lives in: York Township
Hometown: Brandenburg, Ky.
Position at the YDR: Editor
Years with the YDR: Since 1989
Graduated from: Pitt-Johnstown, B.A. Journalism; and Penn State Harrisburg, M.A. American Studies.
Blog: York Town Square
On Twitter: @JamesMcClure
On Facebook: James McClure
Also on Facebook: Civil War Voices from York County, Pa.
Google+: Search for James McClure
Whatever you’d like to tell us about yourself: The “about” on my blog tells a lot. But I would also say two people whose theories fascinate me are Billy Beane of “Moneyball” fame and New England Pats Coach Bill Belichick. I love the way that Beane looks for value in unsung or asymmetrical players. Belichick is a genius for putting an adaptable system in place that works, even as his players and the game change.

1. What made you want to become a journalist? I think when you’re doing journalism, you’re doing something important for the community – and beyond. Journalism is a vocation or calling – not a job – which implies a special commitment, demands a certain lifestyle and carries a vision of a higher purpose. And how many professions do you know in which you constantly hope the clock runs slower, not faster? And I like to write.

2. How do you see journalism changing? It’s urgently accelerating toward digital first. But the context is that the newspaper will remain important, just published at the assigned time in the daily continuum.

3. What do you like most about your job? The least? Most: When I am writing, particularly. Least: Nothing, top of mind. If pressed, it’s probably approving newsroom expenses and dealing with financial budgets.

4. It’s 9:30 a.m. on a day off. What are you doing? Probably something touching on history: Working on my blog, www.yorktownsquare.com, or preparing for a presentation on York County history for a community organization. Generally, people don’t understand that to prepare a presentation from scratch takes at least 6-10 hours.

5. What’s been your favorite project or story recently? Why? For our newsroom, I love the way we pushed the accelerator through the floor in making our sites immediate at the time we installed the paywall, or online subscription, in August, 2011. In the community, I’m thrilled we pushed ahead the issue of child abuse in the aftermath of the terrible case of Darisabel Baez. Then, we underscored the child abuse issue a bit more in our coverage and commentary in wake of the Penn State sex abuse scandal.

7. Your favorite journalism-related blog you read or Twitter feed you follow: Several on www.yorkblog.com, and I’m particularly enjoying www.yorkblog.com/ydrinsider. It helps me keep abreast of our newsroom, and I hope readers find is similarly informative. And Steve Buttry’s The Buttry Diary fuels one’s sense of discovery.

8. What’s the last movie you saw in theaters? “Moneyball” and before that, “Hangover II.” Yes, “Hangover II.” (It’s a long story.) The last book you read? A collection of Charles Spurgeon’s sermons and “Passage to India,” E.M. Forster. (The latter is part of a personal project: I’m trying to read/audiobook my way through ML’s top 100 works of fiction.  I have a long way to go.) See: So, you want to become a journalist or a historian? Are you a reader?

10. What’s one piece of newsroom jargon that had to be explained to you? In my historical work, I’ve been familiar with the verb “curate” for years. Now, it’s applied to the digital world as a richer, fuller, more encompassing term for edit.

Last week, we ran a Q&A with entertainment reporter Erin McCracken. To read all of the staff Q&A interviews we’ve done so far, click on the “Staff Q&As” under “About us” at the top of the homepage.