A virtual friend, Joanne Phillips, asked me to answer some questions about  using Pinterest for her blog. Joanne runs the Newspapers on Pinterest account. She tweets by the handle @socialscraps.

Here are her questions and my answers. My bosses thought it might interest some of you. So, here goes. Enjoy! 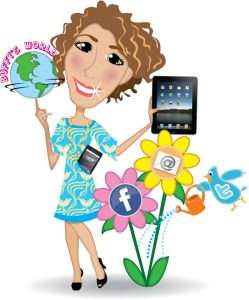 1. How long has the newspaper had a Pinterest account? Why did the paper open up an account?
We only recently added Pinterest to the list of social networking sites that we participate in. The York Daily Record/Sunday News is constantly exploring ways to expand our digital footprint. We are no longer a newspaper, but a media company. It just so happens that one of the things we do, and quite well I might add, is produce a daily newspaper. But we also produce a glossy women’s magazine, make documentaries (we won an Emmy) and run a slew of websites associated with our various brands, which includes Smart, FlipSide and GameTimePA.

Pinterest is simply another tool in our toolbox that we can use to connect with our readers.  Our mission is to deliver the news and information our readers want in whatever way they want to receive it. For some, that might be Pinterest.

2. Who is in charge of pinning? Or is it a team effort?

As you know, I maintain my own boards. I’ve shared many of my boards with our Smart magazine account and the YDR account.

By sharing these, the boards not only show up on my account but also on the Smart and YDR accounts. And, the best part, I can post via my account on these boards without having to log off my account and onto either Smart or YDR.

Several people post to the Smart boards, but my Smart magazine editor, Kara Eberle, has primary responsibility for overseeing this account.

Most of the YDR boards I’ve created and maintain, but others are getting involved. For example, our night news and digital desk pins the front page of the newspaper every day.

So the short answer is that it’s a team effort, but there are some key people who oversee day-to-day pinning. I would like to get more people involved. As you know, it’s a ton of work not only to pin but also to promote the pins/boards via various social media.

With more than 80 boards myself, it’s a lot to keep up with.

3. What is your strategy for pinning? What are your goals? (To drive traffic? To build community? To build brand recognition? Other….?)

I hope to connect and engage with our readers. I also hope to drive traffic to our websites and promote all of the cool things we do. Some of the things I’ve promoted are contests (such as our Peeps contest and Sharp-dressed shoes contest  ) and feature series by my staff (such as our oral history series, Remember,  and the new series we just started, Exit Interviews .

Pinterest is just another site I use to help build a robust virtual community that encompasses all of our brands.

4. How do your pins and activity on Pinterest align with working towards those goals? How do you measure success?

We measure success by the number of repins and comments. We look at the referrals coming from Pinterest.

As I said earlier, I use Pinterest to tell people about great stories. For example, I noticed that someone had pinned a Girl Scout image on a board. I took the opportunity to share, via a comment on the pin, a story one of my reporters did that looked back on 100 years of Scouting and included video and audio files. I figured that people who would be interested in that particular pin (I pinned it myself onto My Childhood board) might also be interested in reading this great story.

I also did this with an S&H Green Stamp pin, linking to the story my staff did on people remembering collecting the stamps.

Both the Girl Scouts and green stamp stories were part of our Remember series.

Each day, I try to find a pin that I might be able to add a link to via a comment as a way of delivering great stories to a new audience.

5. Have you noticed Pinterest generating referral traffic for newspaper’s website? (From your pins? or From people pinning from your site?)

There is some referral traffic, but this is a work-in-progress.

6. How did you build your following? What tips do you have for other papers wanting to build their follower count?

I do several things. I follow people who follow me. I will tweet an image from one of my boards and include a link to the board for people to check out other images on the board. I will also do this on YDR Facebook page, Smart Facebook page, FlipSide Facebook page, my Facebook page, all corresponding Twitter accounts, Linkedin, Google+ and any other social networking platform I’m active on.

7. What has been your most popular board and pins? Any guesses why?

I did a board with my features staff (includes contact info. for each staffer) and that has 462 followers and my Buffy’s World ad campaign board has 530 .

It’s interesting that the individual boards have far more followers that the overall YDR account. It shows that people do pick and choose the boards that interest them.

At this point, we are not collaborating via the YDR boards outside our newsroom. However, a fellow journalist, Jen Westpfahl, social media editor at the Pioneer Press, asked to collaborate on one of my personal boards, Under Stairs. I asked her if she would share two of her personal boards with our Smart account, and she was happy to do it. She shared: Gluten-free recipes and photo groupings

I personally think that newspapers within the same company should look to collaborate as a way of populating their boards and sharing content. If we share boards, the boards become more robust and we reach more people.

9. If a newspaper is on the edge about whether or not to open a Pinterest account, what would you advise they consider?

I would say that you should have a champion, someone who is excited about the platform and passionate about it. I’m not going to lie, it can be time consuming and a bit addictive. But I think that we should always try new things. If it doesn’t work, it doesn’t work. We must be willing to fail, willing to take chances.

So my advice is that a newspaper should explore this just as they would any new social networking site. I’m constantly trying new things with Pinterest.

For example, I am in the middle of a fiction blog series The Yearbook  on my writing blog, Buffy’s Write Zone. I started a pin for each day’s entry that links back to the post . The series is based on posts from a 1982 yearbook and the protag tells you what happened to that classmate.

10. How do you think newspapers can make the best use of the platform? What tips can you offer to other papers about pinning?

I’m still learning and trying new things. I’d like to find a way to monetize our Pinterest efforts, and I am working on coming up with some viable efforts.

I think this is a great platform for posting user-generated photos. For example, if readers send the newspaper weather photos (first snow, etc.) pinned them to a board and then share that board via Twitter, Facebook, Google+ etc.

Right now, our FlipSide account is asking for photos of Easter egg hunts. They’ve created a board and anyone who shares a photo with them to pin will be put into a random drawing for a cool prize.

But definitely let your community help you populate the boards. I have a Historic Photos of York County board  and these images come from the public who has shared them with the YDR via our gallery .

I have tweeted the creators but maybe if more of us tweet them and ask for these changes, it might lead to change. Here are the Twitter handles: Ben Silbermann, @8en; and Evan Sharp, @eshp.

Outside of the newspaper industry, what unique, creative or fun uses have you seen from brands or individuals using Pinterest?

I am using Pinterest as a way of promoting my books  and the literary agency that represents me. Again, just trying to reach people in whatever way I can.

I also contribute to these blogs: YDR Insider and Smart magazine