Immediacy on ydr.com: When we know it, you know it. 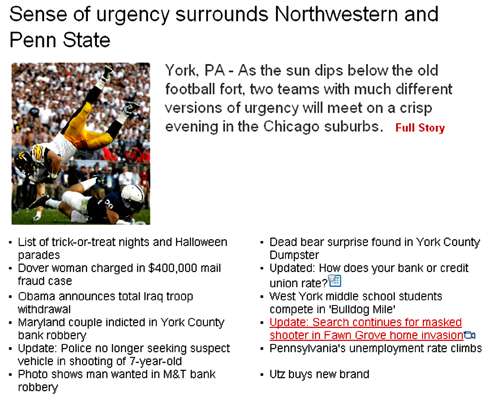 When we prepared for installation of online subscriptions or paywalls on our five websites, we addressed two areas that would benefit readers and keep them coming back despite the new charges for stories and photos: immediacy in content and a favorable navigational experience.

More on the navigational piece in future posts.

As for immediacy, it can be summed up in a philosophy that actually has been in place for some time: When we know it, you know it.

But since the introduction of online subscriptions, most recently in August, we’ve put immediacy on steroids.

Our sites are regularly updated to inform readers, in the first place, and then keep them coming back for more.

Susan Martin, our metro editor and immediacy master, describes immediacy in her own terms:

“It’s become even more imperative since we introduced online subscriptions. People are paying for their online news, so we better give them their money’s worth.

“There already are plenty of worthwhile stories, photos, videos and more throughout our website. But when news breaks, immediacy is our most critical contribution.

“See heavy black smoke coming from Route 74? We’ll tell you (and show you) a boat caught on fire.

If it’s something worse? You’ll get frequent updates on injuries, road closures, evacuations and anything else you need – or want – to know.

“No one else is going to provide the coverage and depth of the news when it comes to York County.

“Occasionally officials will lock down a school. When we hear about it, we post what we know. Parents, grandparents and the community in general know they can come to us to learn what’s happening, rather than flood the school with calls at a busy time. When it turns out that shots from a nearby hunter had prompted the concerns, and everything is OK, we’ll let you know that, too.

“When floods washed over the county in early September, readers got round-the-clock updates on damaged roads and bridges, cancellations, warnings and tips, in addition to stories and visuals of how people were coping. We also provided the social network platforms for readers to share information and concerns.

“We’re providing a service for the good of the community, and it’s one worth paying for.”

If you’re a reader, how would you evaluate the immediacy of our site? Are you finding fresh news each time you visit?

When we post on our websites, we often push out the headlines to readers via social media sites: