Does NewsVroom help make the York Daily Record an example for E&P to spotlight?

I just entered a contest by Editor & Publisher for an annual recognition known as “Ten newspapers that do it right.”

The entry guidelines are simple:

Our March issue will profile what we have long labeled “10 newspapers That Do It Right.” Never meant to be a “10 Best” list, instead it spotlights select newspapers that have earned a notable achievement in at least one particular area, carried out a successful innovation, implemented cost savings procedures or developed programs that have generated revenues or increased circulation. This year we will also be including ideas, strategies and tactics which individuals have knocking around in their attics — whether or not they have been implemented or tested.

The objective of the story is to bring ideas together and share the best and the brightest in one comprehensive feature. All ideas are welcome.

So I took this opportunity to sum up the terrific experience we’ve had with NewsVroom so far. Take a look at the entry below and let me know what you think. Would you give us props in this contest?

What was the notable achievement, story, procedure, etc?

This mobile media lab visits an array of community events; everything from high school football games to holiday celebrations to parades and classes. Staff from the newsroom and the advertising and circulation departments create hands-on experiences to boost the public’s understanding of how they can use new technology to share news and information.

NewsVroom has six 17-inch laptops, six iPads and six smartphones and a powerful Cradlepoint wi-fi router to connect them all to the internet anywhere we go. We can pull out a bunch of folding tables and chairs and set up workstations under our bright red pop-up tents. We teach people about what we do online and how they can contribute. We show them how to take good photos with their cell phones, how to share them with us immediately, and how to promote those photos on social media. We take the time to ask them how we can better serve their community.

The van itself is wrapped in images our many online platforms, including our moms site, “Smart,” our entertainment site, “FlipSide” and our high school sports site, GameTimePA.com.

So much of this was done with available resources and affordable resources that this really is something that can be rolled out elsewhere (pun intended). Here how we did it, in a nutshell:

1)  Find a vehicle: We procured an old delivery van from our Circulation fleet.

2)  Decorate it: We sold a couple of sponsorship positions, a la NASCAR, to underwrite the cost of a full vinyl wrap that boasts our branding.

3)  Fill it: Folding table and chairs are cheap or readily available. We bought a few standard pop-up tents for $89 apiece.

4)  Equip it: OK, here’s the hard part. In our case, our company picked up the tab for the technology. But this could be done with existing technology, if your newsroom is equipped to be mobile. Reporters and editors could bring their laptops and smartphones, etc., to events and show them off. But we do recommend dedicated equipment for this project. No one likes to pass their everyday work equipment around to scores of strangers.

5)  Promote it: We created Twitter, Facebook and email addresses for NewsVroom, as well as a blog. We talked this up in our paper and across all our social media channels. And we launched big, at one of the biggest football games of the year, followed by the fair, which is the largest gathering of people in this county each year.

6)  Sustain it: A small team of people are committed to keeping NewsVroom out and about through the year. The entire operation – news staff as well as advertising marketing and circulation – find time to use NewsVroom to promote their efforts.

Through games, contests, challenges and giveaways, NewsVroom conveys that local news is fun, exciting and innovating. It’s something for you to be a part of. We don’t sell subscriptions. We don’t sell anything. But we do show people how they can do a better job of following and covering their teams, their towns and their organizations.

Here are a few examples:

High school football: The NewsVroom debuted on the opening night of high school football in York and Adams counties. Every Friday we hit a new stadium, and every Friday the goal was the same: meet our fans/viewers/readers and help them learn about all the new ways they can follow high school sports on GameTimePA.com. Our NewsVroom teams, which included employees from marketing, sports, news and business, set up shop inside high school football stadiums. We tweeted out home-team trivia questions and let people use the NewsVroom iPads and laptops to dig into GameTimePA.com to find the answers. We asked fans to “Show us Your GameTimePA App” to win a prize. We helped scores of people download the app and showed them how to use its features. (On Friday nights when the ‘Vroom was out, we averaged 46 GTPA downloads a night. That’s versus averages of one to 10 downloads on most other days of the week. In total, 1,256 people downloaded the app during the football season.) We set up a laptop to show the football Game of the Week that we livestreamed every Friday. We live-tweeted and used Storify and ScribbleLive to document the game and the crowd. We shot pregame videos with tailgating fans and posted video clips during and after the games.

Halloween parade: York’s 2012 parade had a theme of Health & Fitness and participants were asked to avoid candy and focus on serious stuff. The NewsVroom team opted for silly. We dressed as people who were exercising when the Zombie Apocalypse struck. Whether we were jogging or on the 18th hole playing golf, that’s when we bit it – or got bit. Instead of handing out candy, we handed out zombie flyers that encouraged families to post their parade pictures to ydr.com. We even offered a $50 gift card to Target for one winning photo. The flyer told readers that, “In the event of a Zombie Apocalypse, the York Daily Record/Sunday News is your No. 1 source for news and information. Get lightning-fast updates of the slow-moving mobs through YDR email news alerts, tweets, live-blogging, websites and social media accounts.” We had a blast shuffling and moaning alongside the van, and the judges appreciated our twisted take on the theme. We won first place in the media division and took home a killer trophy. More importantly, ydr.com received an album of contributions to our online gallery of Halloween parade photos that we otherwise would never have seen.

York Fair: For 10 days, NewsVroom was the centerpiece of the vendor hall at the York Fair. As you’ll see in the September archives of the NewsVroom blog, we played games, explained our technology, broadcast live interviews, even wrestled with a squad of local Mixed Martial Arts fighters. From our 100 hours there, we created a database of ideas and sources for future stories. Thousands of people were exposed to our message of community engagement. Hundreds got their hands on our technology. And dozens have remained closely connected with us since.

Those are just the highlights. Since the project launched in August, NewsVroom has made at least one public appearance every week. We plan to accelerate that pace in 2013, and refine the educational aspects of our visits.

If nothing else, this project has been a big morale boost to our organization. People are proud of the work we do, confident that we are succeeding in the digital age, and eager to share our good story with the community we serve.

We believe deeply that the York Daily Record is NOT a newspaper. Rather, the York Daily Record is a local news and information source staffed by people who are fiercely dedicated to helping this community make the best decisions possible every day. A newspaper is one tool we use. But we welcome new tools that do an astounding job of improving that flow of news and information. We work hard and directly with this community to ensure that the best tools are being used well.

Here is a partial rundown of NewsVroom events since its launch in August: 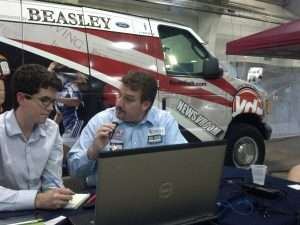 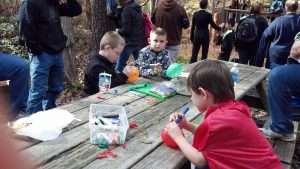 Oct. 25: How To Get It Published seminar

So there it is. That’s our entry. What do you think?