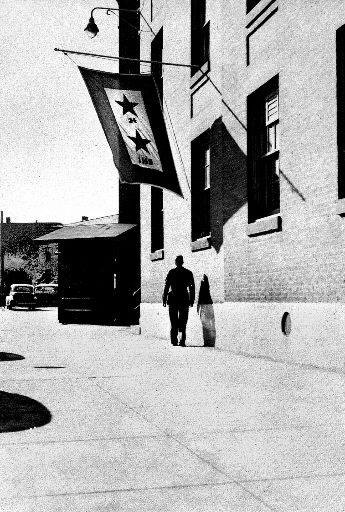 This flag at York Corporation’s West York plant shows that 24 Gold-Star employees lost their lives in World War II through V-E Day, May 1945. At that point, 1,148 had served in the military. Robert W. Zercher, branded a terrorist by his Nazi executioners, was one of those 24. Background posts: Zercher, I, Zercher, II, Zercher, III and Zercher, IIII.

Swiss resident John Meurs has picked up on York Town Square posts about York County resident and downed World War II airman Robert W. Zercher.
Meurs provided additional details about the capture of Zercher and another airman by the SS in Apeldoorn, Holland, and their subsequent execution along with members of the Dutch resistance. Their bodies were displayed around the Dutch city with signs saying “Terrorist.”
Meurs wrote: …

Bob Zercher was arrested in the house of Joop “Joke” Bitter, who was then engaged to my sister. We lived a few houses from each other on the same street. The Germans who came to arrest Joke were unaware of the presence of the two airmen Bob Zercher and Kenneth Ingram. Instead of arresting only a young boy, they were all of a sudden confronted with the presence of the two airmen. They were so confused that Joop was able to escape, but his mother was arrested and died later in the Ravensbrück concentration camp for women in Germany. We can safely assume that Joop’s life was saved by the presence of Bob and Kenneth.
After the war, Joop married my sister and they got three children. Joop never set a foot in Germany and never spoke to anyone about his war time experiences. He died a couple of years ago at the age of 83.

But wait. There’s more
Meurs attached a deposition from a member of the Nazi execution squad.
The airmen were executed, according to testimony, because they bore forbidden arms and anti-Nazi propaganda.
Further, according to the deposition:
Zercher and other condemned were given over to executioners.
One of the condemned, a member of the resistance, started singing the Dutch National Anthem and opened his coat. Other prisoners did the same.
Then came the order to shoot.
The volley did not immediately kill all of the prisoners, and the executioners delivered several “final shots.”
The shooters looted the bodies of the victims and put valuables and identity papers into their pockets.
A car was backed up near the bodies, and the squad leader gave one of the dead a push with his foot.
“Away with them,” he said.
The bodies then were taken around town where a sign with the word “Terrorist” was placed around their necks.
As mentioned in a previous post, York County should honor this brave airman, Bob Zercher.
(For a York Sunday News column on Zercher’s heroics, see York war hero honored more in Europe.)