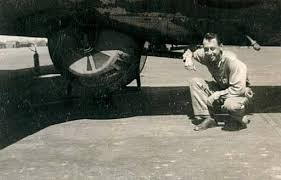 York County World War II airman Robert Zercher:
– Was a crewman in a B-17 shot down over Holland in April 1944.
– Hidden from the Germans by the Dutch resistance.
– In October, caught by the Germans and murdered with a British airman and six members of the Dutch resistance.
After the executions, their bodies were laid on the streets of Apeldoorn in The Netherlands with the word “terrorist” written on a paper laid on his chest… .

A monument was later erected for Zercher and his fellow Allies to call attention to their bravery and the war crimes associated with their deaths.
Just recently, Cynthia Norton noticed a Yorktownsquare.com post about Zercher, one of five detailing his death, and commented:

“I believe that the “farmer Buitenhuis’ you are refering to in your article was my maternal grandfather. I grew up hearing the stories of his bravery in hiding a pilot in the haystack as well of his horrible consequences of helping.
“His given name was Roelof Buitenhuis. Shortly after he helped the pilot he was reported on and sent to a concentration camp in Holland. My mom cannot remember which one. She was a little girl at the time.”

She wrote that he was later recognized by Allied commanding Gen. Dwight D. Eisenhower and British Prime Minister Winston Churchill for his bravery during the war.
Ask around York County – even among veterans officials and workers at his former employer York Corporation – and they will tell you that they’re not familiar with Bob Zercher.
A thought for this Veterans Day: It’s about time York County commemorates its hometown hero.
Here are other posts in the series about Airman Robert Zercher’s life and death:
Background posts:– Nazis murdered downed WWII airman from York, I.
– Zercher, II.
– Zercher, III.
– Zercher, IIII.
Zercher, V.
Also:
– All war posts from the start: War category.
– All York Town Square posts from the start. (Key word search by using “find” on browser.) Or search via Google.