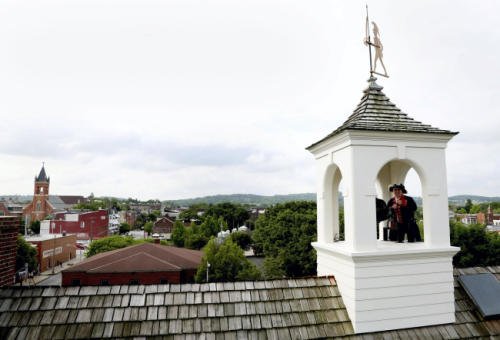 The Colonial Courthouse has a new bell. The stand for the 1805 bell, used at the old York County, Pa., Poorhouse, has some defects. So now the bell on the replica of the mid-1700s York County Court House is ringing again. But here’s the question. How did York Daily Record photographer Sonya Paclob get this photo of bell ringer Tom Gibson in the cupola of the York replica? No building stands near enough for this tight photo. And a second question. What is that church in the background? Bet you never saw it from this angle. (Answers below). Also of interest: Flags of our Fathers displayed in Colonial Courthouse.

Remember that skull of the Civil War soldier that is up for auction, explained in a previous post here.

The auction company says it will donate the skull to the U.S. National Park Service.

Slice of life: At YorkTownSquare.com we specialize in slices of York County life.

So does YDR photographer Paul Kuehnel, who has updated his list of odd stuff heard or tweeted from the police scanner.

For example, he captured a 911 call: “For a snake hanging in the rafters of the kitchen and it looks like it has a rattle.”

Journalists, including @ydrcom‘s @Jasonplotkin, tell how their personal stories of trauma infuse their work. http://t.co/bcrzt2HkqU

History mystery: This one received more engagement than I would have envisioned. Look at the comments to find out why:

*Sonya Paclob was elevated in a cherry picker to capture the cupola from that view. That’s York’s First St. John’s Lutheran Church in distance. The courthouse replica points to the original courthouse in which the Continental Congress met in its 9-month stay in York County in 1777-78 in the American Revolution.