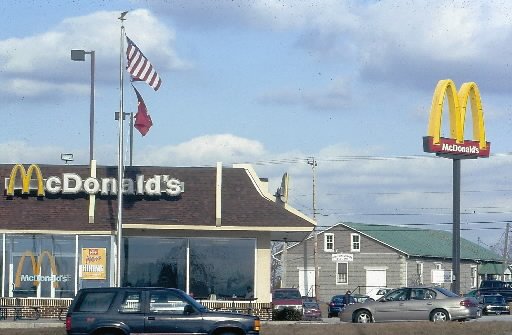 The now-demolished Red Lion Grange Hall has fascinated me for years as a symbol of change in York County.
It was a case of the county’s long-held agrarianism battling unchecked development. Its demise five years ago signaled which side is winning… .

You might remember that I made the photo above above one of the top 20 iconic photos of York County.
My recent York Sunday News column updates what’s happening on that corner near Red Lion.
Here’s an update of the update from that column:
Grangers fought big Eastern banks for years. When the Red Lion Grange Hall was demolished, its footprint was covered by a bank. With “farmers” in its name.
Interesting.
But there’s more.
Now, through merger or name change, the bank lost the word “farmers” from its sign. That continues to inform us about agriculture’s status in the region.
And about what’s happening with banks.
OK, here’s some more about the Red Lion Grange Hall, a York Daily Record editorial from July 30, 2002, when the hall went up for sale:

The gray Red Lion Grange Hall stands in captivity, surrounded by gaudy chain fast food restaurants, chain supermarkets, a chain drug store and a chain convenience store.
A property for sale sign near Cape Horn Road portends a similar future for the 1.65 acres on which the building sits.
As long as the hall’s solemn walls remain standing, they should loudly remind thousands of daily motorists of a York County that is passing – a useful agrarian existence that is losing to voracious development.
It’s been a York County of rolling farmland, shady hollows and covered dish dinners to end a hard day’s work in the field. It’s been a York County whose people make extra food when illness hits a less fortunate neighbor. It’s been a York County whose fading beauty is still sufficient to attract newcomers. But it’s becoming a bloated York County inflicted with a disease called sprawl.
The Grange movement brought together farmers for their mutual welfare and advancement since shortly after the Civil War. Granges were one of many public associations that formed to get things done in local communities and beyond.
The organization was far from alone. It was joined by volunteer fire companies, Lions clubs and other service organizations and churches to infuse community into communities. York County has been blessed with an abundance of such groups.
Alexis de Tocqueville, the aristocratic Frenchman who toured America in the 1830s, applauded public associations. For a democracy to work, he said, such associations must help forge a consensus among people of equal birth and standing. Reform and change came by royal decree in Europe. In democratic America, people needed informal and formal organizations of peers to create consensus.
Enter the Grange and other like-minded organizations.
To be sure, finding consensus in York County has always been difficult, even with the presence of hundreds of public associations. That came from the county’s earliest years, from an independence bred from life on the far side of the river, the large amount of land within the county’s borders, nationalities that didn’t blend and a burgeoning number of towns with their own governments.
Today, the decline of public associations makes consensus in York County even more difficult. This decline comes from all angles: the aging of members of Grange and other service organizations, longer commutes that bring young adults home late, the advent of satellite and cable TV that brings the passivity of more TV into more homes.
Add suburban sprawl to that list, too.
York County is increasingly made up of vanilla-flavored subdivisions with idyllic names that have no connection with its past. The subdivisions foster detachment, dilute community life and encourage commuting, even for a jug of milk. Left for the bulldozer are Grange halls, Revolutionary War prisoner of war camp sites and other monuments to the past.
What can be done?
Certainly public service organizations need to work on their often ingrown nature, welcome newcomers and make their programs as winsome as possible. They must look for new ways to attract new people.
Meanwhile, county residents must get involved in community life and occasionally pass by the fast food restaurant for a meal at a mom and pop diner.
Government must help too. Smart growth programs, village-style subdivisions and regional planning should be at the top of their agendas instead of the usual bundle of plans for yet more large-lot developments.
To view the 65-year life cycle of the drab Red Lion Grange building is akin to reading a colorful book on the story of community life in York County. It’s a story of delightful, lovingly prepared recipes up against an increasingly homogenized fast food menu.
The story of the Grange building will wrap up in its demolition, with a chain something or other taking its place.
How will the story of community life in York County end?