You maybe didn’t know it but … they’re from York 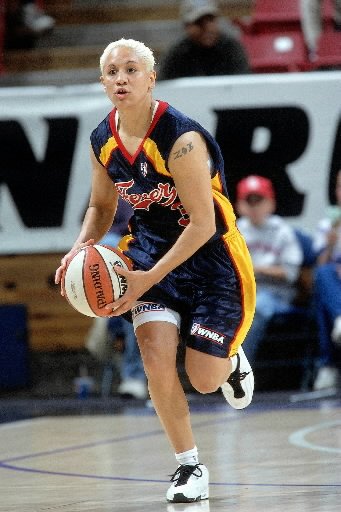 Chantel Tremitiere of the Indiana Fever moves the ball upcourt against the Sacramento Monarchs in 2000. This is the York, Pa., Daily Record/Sunday News’ assessment of Chantel: ‘She stood only 5-foot-5, but she could play basketball. Tremitiere averaged an incredible 13 assists a game and scored 17 points per game as a senior. She earned a scholarship to Auburn, and she played for three NCAA championships during her career. Drafted by Sacramento Monarchs, she became the first woman from York or Adams counties to reach the WNBA.’ She is listed among 90 people from York cited for their achievements on Wikipedia, the free, self-selecting, or public-selecting Web encyclopedia that readers update. Post on other York achievers: Sol and Brooks lead long York County sports parade and Dominick Argento at top of York A & E hall of fame.

Some may remember my discovery outlined in a post some months ago that star BMX rider Kevin Jones (Dorkin’ in York box set features Kevin Jones) has York roots.
I discovered that on Wikipedia under the category – people from York.
I check that occasionally and either see someone newly posted or a national figure I missed before… .

Take Frances Lee McCain , for example. She’s never appeared on any of my lists of actors/actresses from the past/present. I overlooked her even though she has appeared on TV’s “The Bob Newhart Show” and “Dallas” and in films “Back to the Future,” “Patch Adams” and “Footloose.”
She might not be known well here. Wiki says she was born here on July 28, 1944, but raised in California.
I’ll leave further discoveries to you, except for pointing out two other Wiki names with York roots to whet your interest:
– “Don ‘Jake’ Jacoby was a noted trumpeter, teacher, band leader and author who died December 25, 1992 at age 72. He played with Benny Goodman, Les Brown, did session work for CBS, NBC and soloed at Carnegie Hall.”
– “Jerry Howarth (born March 12, 1946) has been a radio broadcaster for the Toronto Blue Jays of Major League Baseball since 1981. After working for part of the 1981 season as a commentator, he joined Tom Cheek as full time play-by-play man in 1982.”
And for an ever-growing list of actors and actresses with York County links who may or may not be on Wiki, see York, Pa..